Russia is already holding Crimean Muslims in detention for unproven involvement in an organization which is legal in Ukraine. It has now begun adding the charge of ‘attempting violent seizure of power in Russia’ with this carrying a near-guaranteed increase in sentence of from 12 to 20 years. The new charges have already been laid against human rights activist Emir-Usein Kuku, Vadim Siruk, Muslim Aliev and Envir Bekirov, and it is likely that they will be added in other cases.

The news was originally reported by Crimean Tatar lawyer Emil Kurbedinov, who is representing some of the 19 Crimeans convicted or in custody on charges linked with unproven involvement in Hizb ut-Tahrir, the pan-Islamist organization which is not banned in Ukraine or most democratic countries.

There are no rational grounds for suddenly adding these new charges, and certainly no new ‘evidence’.  Kurbedinov does note, however that Article 278 of Russia’s criminal code (‘violent seizure of power’) has long been part of the arsenal used against alleged members of Hizb ut-Tahrir within the Russian Federation. It may also be a delaying tactic, to drag out trials which lack any basis in fact. The cynicism of such motives is especially brutal given that the men are held in indefinite detention, and there is, tragically, no doubt about the eventual convictions while Crimea remains under Russian control.

Russia can vary the charges and sentences in such cases, but the facts remain unchanged.  It has never provided any proper grounds for the Supreme Court decision in 2003 which declared Hizb ut-Tahrir a ‘terrorist organization’.  There is no evidence of any ‘terrorist’ or violent activities committed by Hizb ut-Tahrir supporters in Russia or, indeed, anywhere in the world.

For these reasons, the renowned Russian Memorial Human Rights Centre considers all Russian nationals sentenced to long terms of imprisonment merely for alleged involvement in Hizb ut-Tahrir to be political prisoners.

Memorial has condemned similar prosecutions in occupied Crimea for a further reason as well. Russia, as occupying state, is subject to serious restrictions and cannot simply impose its own criminal legislation, deciding that what is legal in Ukraine should now be called ‘terrorism’.  Yet this is precisely what it is doing in Crimea. It is now, most cynically, accusing Ukrainians of trying to violently seize control in the territory Russia is illegally occupying.

There are no grounds for any of the charges against the 19 Crimean Muslims so far arrested.  In at least some of the cases, for example, that of human rights activist Emir-Usein Kuku and Muslim Aliev, there is every reason to believe that the charges are linked directly with the men’s human rights activities and / or civic position.

It is likely that Vadim Siruk was arrested for a different, but no less lawless, reason.  The 28-year-old and his wife, Anna Bogacheva, are ethnic Ukrainians who converted to Islam.  Siruk’s arrest enabled Russia to deny the charges that they were specifically targeting Crimean Tatars, while also sending a chilling warning to others of the trouble they could face if they convert. 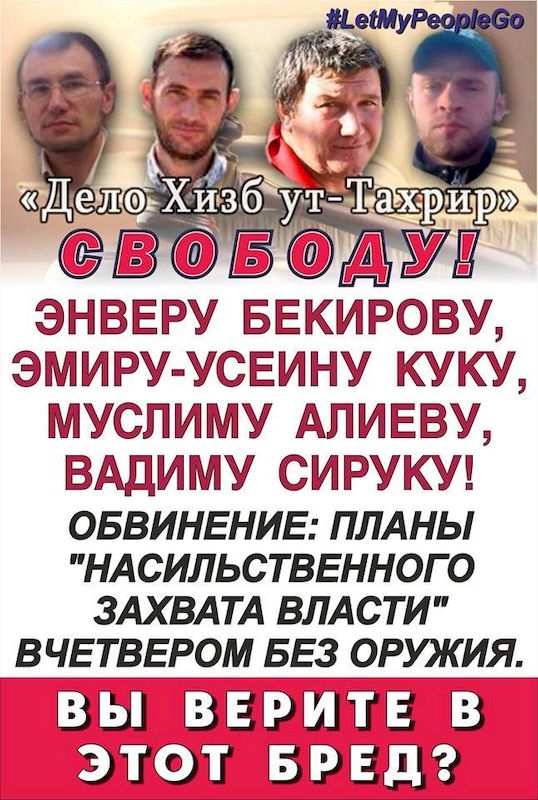 Brave activists in St. Petersburg have protested with the above placard.  It calls for the release of Envir Bekirov; Emir-Usein Kuku; Muslim Aliev & Vadim Siruk.  "The four of them, unarmed, are charged with plans for a violent seizure of power. DO YOU BELIEVE THIS INSANE NONSENSE?

The first indication of the new charges came a day after court hearings on extending Siruk and Kuku’s detention.  The ‘hearings’ are the only times that families have any hope of seeing the arrested men, usually only be video link, but are mere formalities with the ‘judges’ rejecting all legitimate applications.

On this occasion, Kurbedinov reports, Siruk addressed the court.  He spoke of the fabricated nature of the prosecutions and the attempts to intimidate and put pressure on the men to provide ‘confessions’.

The FSB, he said, are pushing a ‘horror story’, trying to present Crimean Tatars, the indigenous people of Crimea as ‘terrorists’.  He spoke of the total lawlessness and the fact that laws in Russia are such ink on the page, worth no more.

Siruk accused the FSB of deliberately circulating false rumours, claiming that weapons arsenals had been found in the homes of Muslims who were thus supposed to be viewed as dangerous criminals.  These are merely rumours.  In none of the cases where Crimean Muslims have been arrested, have the FSB found any weapons or other illegal items.  Siruk believes that many people are now beginning to open their eyes and see who are the bearers of lawlessness and terror against the people.

Russian President Vladimir Putin made many miscalculations when he decided to invade Crimea.  The repressive methods used with impunity in Russia may ‘work’ in the sense that the FSB has the power to imprison innocent men.  It has not succeeded in cowering the men themselves, nor their families and lawyers.

It is possible that the new charges are the latest attempt to put pressure on the men, most of whom have children, to give false testimony against themselves and the other prisoners.  There is no reason to believe that it will succeed.

Anna Bogacheva was expecting the couple’s second child when her husband was arrested in February last year.  Their younger daughter, Khanife, is now three months old.  Her sister Amira’s third birthday coincided with news of the new charges.

“It’s not enough that Amira’s father is being called a terrorist, - Bogacheva comments - now it seems he even wanted to overthrow the regime in Russia. Violently.”

It doesn’t matter how many charges they try to pin on him, she says, he is not a person who can be intimidated. “He is no terrorist and never was”.  Nor is he prepared to bear false witness or collaborate with the prosecution.

Four men - Rustem Vaitov, Ferat Saifullayev, Nuri Primov and Ruslan Zeitullayev – have already been tried and convicted.  The ‘evidence’ was so pitiful and flawed that even a Russian court handed down smaller sentences than those demanded.  It is therefore ominous that the Supreme Court on Dec 27, 2016, allowed the prosecution’s objections against the sentence passed on Zeitullayev and sent his case back for what is euphemistically referred to as a ‘retrial’.  The message was clear: forget the lack of any evidence and provide the sentence demanded.  In Zeitullayev’s case and those of the 15 men in custody in Simferopol, the sentences are now likely to be a minimum of 12 years.  For human rights defence, a civic position, or for nothing.

There was little or no reaction from the international community, even from rights NGOs, to the first four arrests in early 2015, and remained little even from February 2016 when the pace of arrests increased sharply.  It is not inconceivable that Russia initially held fire with the ‘violent seizure of power’ charges in case of adverse reaction.  It is now urgently needed.