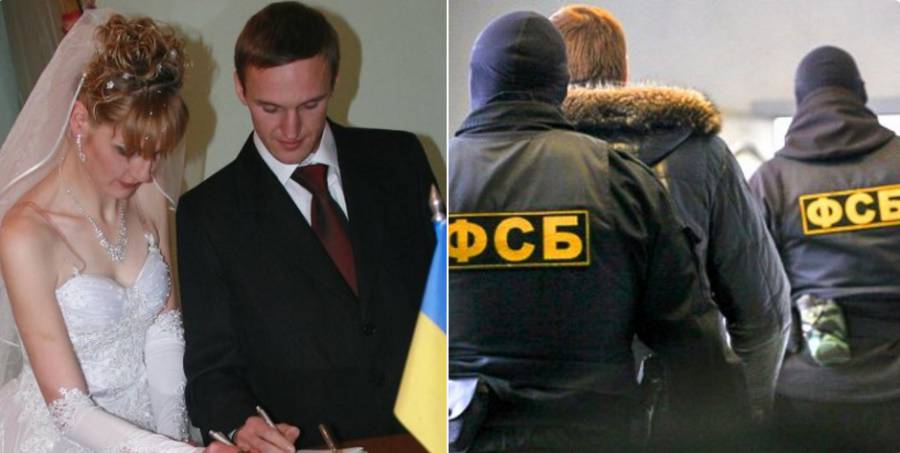 Russia’s FSB is preparing ‘extremism’ charges against yet another pro-Ukrainian Crimean, a young mother of two small children, with the pretext this time being a post on the social network VKontakte.

FSB officers turned up at around 7 a.m. on Jan 12 at the home of Andriy Vinohradov and Natalya Kharchenko in Simferopol.  They carried out a search, taking all working computer technology, etc. away.  Although they frightened the couple’s two small daughters, it seems they were at least reasonably well-behaved which is not always the case.

Both Vinohradov and Kharchenko were taken away for questioning.  Since it is Vinohradov who is a member of the Ukrainian Cultural Centre, whose members are regularly ‘warned’ not to encroach Russia’s loose and increasingly misused ‘extremism’ legislation, it was initially assumed that he was the FSB’s target.

The couple’s lawyer Edem Semedlyaev has, however, explained that the initial criminal investigation has been initiated against Natalya Kharchenko.  He was not allowed to be present during some four hours of interrogation, nor when they took an ‘explanation’ from her and a signed undertaking not to divulge any information. She has not yet been charged, however the investigation falls under Article 280 § 2 of Russia’s criminal code (‘public calls to carry out extremist activities carried out with the use of the media or Internet’). She was released only at 14 hours.

Semedlyaev was able to be present during the questioning of Vinohradov and explains that the latter refused to give any testimony, as is his right.

Krym.Realii reports that the FSB appear to have taken issue with a photo of Kharchenko in camouflage gear with a Ukrainian flag, against Crimean landscapes.  Semedlyaev believes that they may also have come up with some posts or ‘likes’ on Kharchenko’s VKontakte page.  He had tried to see Kharchenko from the outset, and it is clear that the investigators deliberately prevented him from being present.

The young woman has a number of medical issues which were exacerbated by the events of the day, and Semedlyaev is waiting until she feels better before speaking with her in depth about the interrogation.

Vinohradov told Krym.Realii that this was likely to happen sooner or later, given the family’s pro-Ukrainian position.  They will certainly fight any criminal prosecution.

Natalya Kharchenko is the latest in an increasing number of Crimeans facing ‘extremism’ charges for an openly pro-Ukrainian position.

The most flagrantly cynical charges are those laid against Crimean Tatar leader Ilmi Umerov and journalist Mykola Semena.  Both men are charged with ‘public calls to action aimed at violating Russia’s territorial integrity for an interview in Umerov’s case and article in Semena’s where the men expressed the view that Russia must stop occupying Crimea.  This could carry a five-year prison sentence.

Volodymyr Balukh was arrested in December 2016, just 10 days after he hung a plaque on his home in memory of the people killed during Euromaidan.  The 44-year-old from the north of Crimea has already faced surreal criminal proceedings over the past 18 months which seemed directly linked to his pro-Ukrainian position and the Ukrainian flag above his home.  The prosecution’s case then lacked any credibility, and it is extremely likely that his ongoing detention and the charges of possession of bullets supposedly ‘found’ in the attic are politically motivated.

It remains unclear whether the FSB will indeed press ‘extremism’ charges against Ihor Movenko, the Ukrainian from Sevastopol whose savage beating over the Ukrainian symbols and ‘Azov Battalion’ stickers on his bike resulted in his administrative fine and no criminal investigation into the attack.  He was also detained in December and beaten by the FSB who threatened to jail him if he didn’t provide a ‘confession’ to ‘extremism’.

It has also become quite simply dangerous to publicly photograph oneself with the Ukrainian flag.  There have been several occasions where Crimeans were detained and faced administrative court proceedings for such photographs. The courts under Russian control obediently fine the Ukrainians for non-existent infringements of the rules on holding public meetings or similar.

Four Ukrainians also received 20- or 40-hour community work sentences for a Ukrainian flag or Ukrainian ribbons at a peaceful gathering to honour the poet Taras Shevchenko on March 9, 2015.