Half the Berkut officers deployed against EuroMaidan activists remain police officersYanukovych ‘doesn’t remember’ the bloodiest day of Maidan killingsPolitical PR & sabotage instead of real investigation on eve of 2nd Maidan anniversaryUkraine’s only trial over Maidan killings under threatPolice & judges accused of impeding prosecution of crimes against Euromaidan activistsAnother person charged with Euromaidan crimes allowed to escape?Ex-Security Service chief in custody over Euromaidan killingsSo who doesn’t want justice for Euromaidan victims?High-ranking Berkut officer charged over Euromaidan killingsEuromaidan: A Year of Impunity and what went wrongEx-Berkut officer on trial over AutoMaidan ambushEx-Berkut officers arrested on suspicion of involvement in Maidan killingsWhere are 13 mysterious Berkut sniper suspects?Who (hasn’t) answered for crimes against Maidan?Maidan killings suspect missing after being released from custodyTwelve detained on suspicion of involvement in the gunning down of Maidan protesters (updated)Blood and Berkut Sniper Bullets on the President’s HandsMustafa Dzhemiliev on Maidan: I’m proud of you, dear fellow UkrainiansBerkut snipers aimed at protestersWaiting for more bloodshed?
• Topics / The right to life
• Topics / The right to a fair trial
• Topics / Human Rights Violations associated with EuroMaidan 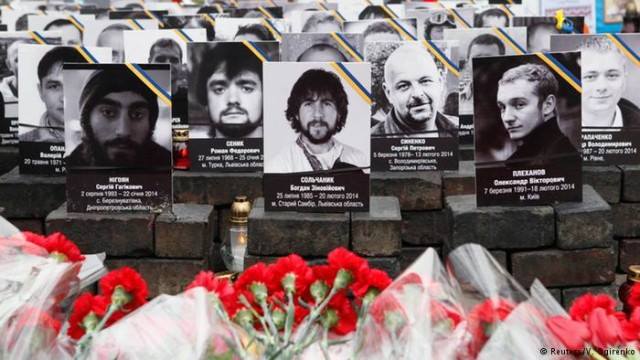 10 of the 23 former Berkut officers suspected of gunning down protesters in the last bloody days of Euromaidan have now received Russian citizenship, while a further two men have been given ’refugee’ status.. It appears now that the Kremlin-backed militants, who follow Moscow’s orders, have also added 3 ex-Berkut officers charged with the deaths to its list of people to be handed over in exchange for Ukrainian POW and hostages held in Donbas.

The information about the men in hiding in Russia was reported by Roman Psyuk from the Special Investigations Department investigating Maidan crimes following an official response from Russia’s Prosecutor General’s Office.  A further 6 men are on the wanted list, with their whereabouts unknown.

This leaves just 5 men facing changes over the killing of 48 of the 104 activists killed during Maidan, and that trial has faced multiple obstacles.

At a press briefing on Jan 17,  presiding judge Serhiy Dyachuk complained of interference in the work of the court, and asserted that the last four hearings had been disrupted through the actions of certain civic organizations.  Dyachuk said that reports had been sent to both the High Council of Justice and the Prosecutor General’s Office and threatened to continue the trial behind closed doors. He called the demands of activists unwarranted and believes that they are aimed at dragging out the court trial.

This is a view shared by the Families of Nebesna Sotnya Heroes, the slain Maidan activists. In an open appeal, they stress that they had long called on members of the public and journalists to attend the court trials, but only because of its crucial importance and in order to give moral support to surviving victims and the families of those who lost their lives, not to put pressure on the court.

Twice now, they say, court hearings in the Svyatoshynsk District Court in Kyiv have been disrupted by various protests or flash-mobs.  These were not agreed in advance with surviving victims or families of the slain activists.

Such disruptions, they stress, are good only for the defendants and their lawyers, enabling them to drag out proceedings and conceivably help get them released from custody.  The next court hearing is on Jan 20 and if that court does not extend the men’s detention, there will be no choice but to release them from custody.

If that were to happen, it is quite likely that they would go into hiding as did Dmytro Sadovnyk, the commander of their Berkut unit.  He was arrested in April 2014.  He was remanded in custody, but then on Sept 19 released by Judge Svetlana Volkova from the Pechersky District Court.  By Oct 1 it became clear that Sadovnyk had fled.

For this reason, the Families of Nebesna Sotnya Heroes say that they will themselves be forced to ask for the hearings to be closed to all but families and the press if such disruption continues.

In May 2016, the Svyatoshynsk court began the trial of five former Berkut officers: Pavlo Abroskin; Serhiy Zinchenko; Oleksandr Marinchenko; Serhiy Tamtura and Oleh Yanishevsky.  They are charged with shooting Maidan activists on Institutska St on Feb 20, 2014.  All deny the charges of murder, grievous bodily injury, illegal use of weapons and exceeding official powers.

Nadiya Savchenko, Ukrainian MP who spent almost 2 years a political prisoner in Russia, recently released a list of Ukrainian POW and civilian hostages held by the Kremlin-backed militants in Donbas.  The list also contains people that she asserts the militants, presumably with Russian prompting, want in exchange for releasing hostages. They include three of the Berkut officers on trial *Abroskin, Tamtura and Zinchenko), as well as men charged with involvement in the fatal disturbances in Odesa on May 2, 2014.  Savchenko has been criticized for her action, and the list  has not been formally confirmed, nonetheless at the press briefing on Tuesday, Judge Dyachuk did say that the court had been informed of such a list, and that although the men’s dates of birth were incorrect, it was clearly the ex-Berkut men who were intended.

He did not exclude the hypothetical possibility that the court could be asked to consider the question of releasing the men from custody and said that any such request would be considered in accordance with the Constitution and criminal procedure legislation. He did, nonetheless, point out that Ukraine’s Criminal Procedure Code does not envisage the possibility of releasing defendants to be handed over to a third party.

Almost 3 years on, a pitifully small number of cases involving crimes against Maidan activists have reached the court.  Whatever Russia / its Donbas proxies’ motives in seeking the men’s release as part of an exchange, the move would be highly contentious.  This is yet another compelling reason for resisting any attempts to stymie the court proceedings and for ensuring maximum openness and publicity for the trial.