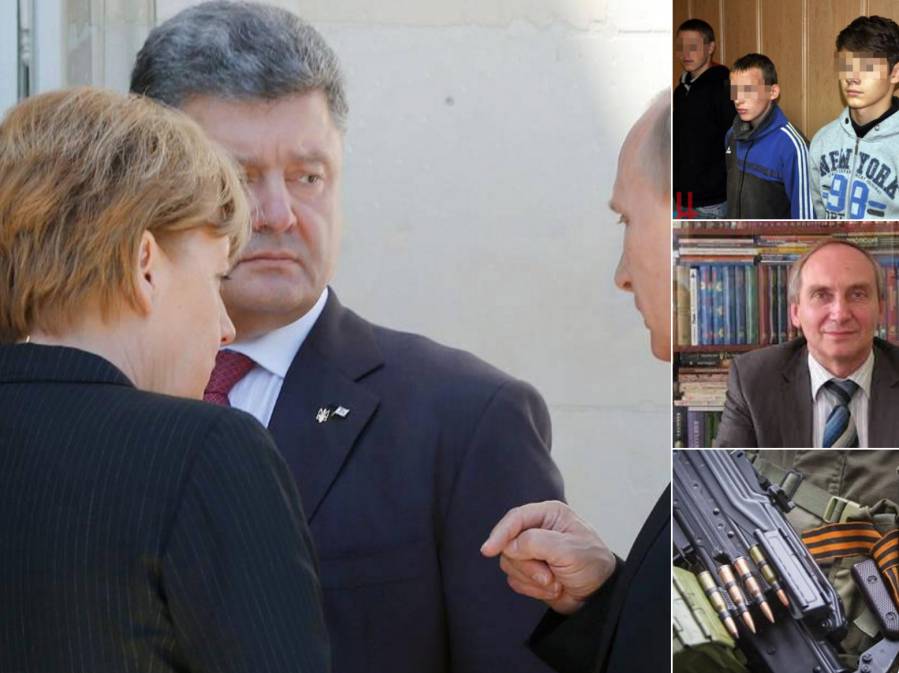 The Kremlin-backed militants in Donbas keep coming up with new huge lists of people whose release they demand in exchange for Ukrainian soldiers and civilians held hostage.  Some of the people are completely unknown, while others have committed murders or other grave crimes with no connection to the war in Donbas.  Equally worrying is the fact that the militants are refusing to add some known hostages, like 60-year-old religious specialist Ihor Kozlovsky to the exchange list.

If you read the militants’ own websites, or the reports uncritically citing them on Russian state media, it is Ukraine which is hampering the process.  The problem in that case is understanding why it is invariably the militants who ignore the Minsk Agreement which stipulates clearly that the exchange should be on an all for all basis.  The same agreement speaks only of the release of “hostages and other illegally held persons”, not people serving sentences for murder, robbery or other crimes.

In an Ukrainska Pravda interview, Iryna Herashchenko, Ukrainian MP and the President’s Humanitarian Envoy at the Minsk Negotiations, gave details about the difficulties in even getting Ukrainian hostages added to the exchange list, as well as about the wild fluctuations in the militants’ demands.

As of the beginning of 2017, Ukraine’s list of soldiers and civilians held prisoner by the militants contained 111 names, although the militants have confirmed less than half that number (48 hostages).  That, however, can be considered progress since up to September 2016, the militants’ representatives at the Minsk negotiations were prepared to confirm only 20 people on the SBU [Ukrainian Security Service] list.

They refuse to confirm that they are holding Ihor Kozlovsky almost a year after he was seized in Donetsk.  They claim that he is a resident of the so-called ‘Donetsk people’s republic’ [DNR] and must answer “in accordance with DNR laws”.

Kozlovsky was ‘arrested’ in late January 2016, around the same time as a militant-organised protest outside a Greek-Catholic Church in Donetsk.  The participants, reportedly public sector workers who’d been forced to attend, called on militant leader Alexander Zakharchenko “to drive out sectarians”, who were alleged to be Western-paid or even linked with the CIA.

Kozlovsky is a university lecturer known for his active work in fostering dialogue between different faiths.  Any belief that the protest and his arrest were unlinked was dispelled by an interview given by a prominent militant Alexander Khodakovsky. He asserted that the 60-year-old who remained in Donetsk to care for his seriously disabled son might have been involved in what he termed “destabilizing the situation” and had “multiple contacts with various organizations in Ukraine engaged in destructive activities here”.

There are a number of other people whom the militants claim to have ‘arrested and charged’ with supposed crimes or even sentenced to terms of imprisonment.  There is no evidence that any of them have had proper lawyers.  In the case of Yevhen Chudnetsov, one report said that his family had missed the trial at which he was ‘sentenced’ to 30 years because it began half-an-hour earlier than scheduled.

At least some of the people seized on obviously absurd charges are not on the SBU list of 111 hostages.  The list does not include the 7 teenagers who were seized by DNR militants and accused of acts of sabotage supposedly commissioned by the SBU in September 2016.  Herashchenko says that their release before New Year had been agreed in Minsk, with this yet another promise that was not kept.

The list does not include football fans Vlad Ovcharenko and Artem Akhmerov who are only a year or two older, and were seized for their pro-Ukrainian position, as were two Luhansk bloggers Edward Nedelyaev and Hennady Benitsky.

Herashchenko speaks of the other side as including the Russian Federation and notes that their demands keep changing.  At one stage, they presented a list with a thousand names on it, at another -  731, though there are a lot of names on the lists that are repeated.  Ukraine has only been able to confirm some 228 of the names on that list, and has not been able to find several hundred people named. If they do exist and have disappeared, then obviously it’s necessary to look for them or find out what happened to them.  This, however, must not be used as an excuse for blocking the entire process for freeing hostages.

Herashchenko speaks of several dozen “killers” who cannot come under any amnesty or pardon, people who committed crimes outside the military zone, and also of people suspected of organizing terrorist attacks in Odesa and Kharkiv.

The people confirmed on the list provided by the militants are people who were arrested on charges linked with separatism, support for terrorism or for the illegal armed formations.  Most were detained in 2014 or 2015 and sentenced to 4 years, although many have already been released because of the law which counts a day spent in a remand prison as 1.5 of a prison sentence.

Back in September, Ukraine expressed willingness to exchange all 228 people confirmed for the 42 people whom the militants have admitted holding.  Since then, however, several of the 228 have already been freed and the exchange has yet to take place.

Ukraine unilaterally released 15 people, hoping that the militants would follow suit.  They have not though two women were released in a strange story which Herashchenko says has elements of hybrid information war, and was not part of the Minsk format.  She is probably referring to the strange fact that the militants claimed they were specifically handing the two women over to MP and former political prisoner Nadiya Savchenko, whose meeting with the militants aroused considerable controversy in Ukraine.

Herashchenko is convinced that “Russia is doing everything possible to discredit the Minsk format since the Minsk agreements are linked to sanctions”.  It is precisely because sanctions are involved that Herashchenko believes they are working, are helping to reduce the bloodshed, and should not be dismissed.  There is every reason, including Russian President Vladimir Putin’s constant mention from April 2014 of a mythical ‘Novorossiya’, that Putin did not plan to stop with Donbas.  While the Ukrainian army and volunteers doubtless played a major role, so too did the West’s use of sanctions.

One way of ensuring an end to sanctions would, of course, be to comply with the Minsk Agreements.  Discrediting is better since Herashchenko is among many observers who do not believe for a second that Russia plans to leave Donbas.  It wants to hold on to the 400 kilometres of uncontrolled border to ensure that military personnel and equipment can still be deployed.  Of the up to 40 thousand people deployed in the armed formations in Donbas, Herashchenko says there are at least 6 thousand serving Russian military personnel.  Of the rest, a significant number would be mercenaries, most from the Russian Federation.

Russia is hoping to foist all of that on Ukraine, to ensure that it has an externally backed and armed ‘internal conflict’ inside the country.  It wants the hostages to be able to release them and claim that the agreement has been fulfilled, now Ukraine has to agree to ‘elections’ and amnesty.

Elections without demilitarization of the region are impossible and there can be no peace without renewed control of the border.

It is Russia that is preventing this, and while it continues to de facto refuse to leave Donbas, any attempts to pretend that Ukraine has anything to negotiate with the militants are to be resisted.  They have shown time after time that they take their orders from Moscow.  If the latter remains unwilling to relinquish its destructive grip now, how much more so if sanctions were to be removed.