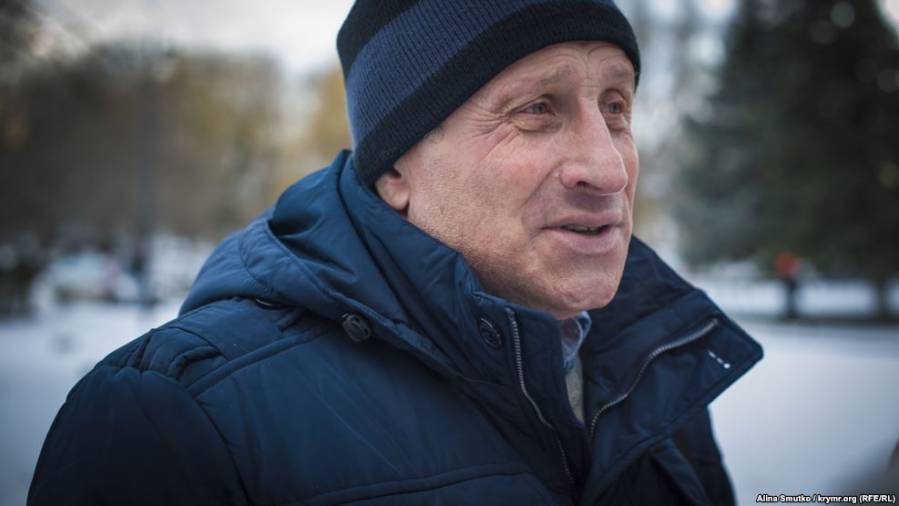 Any lingering doubt that Russia would genuinely convict a journalist for expressing the same position as the United National and all democratic countries has now been quashed.  On Jan 20, Mykola Semena and his lawyer were presented with an indictment that is both eerily Soviet and openly surreal.

Almost three years after Russian invaded and annexed Ukrainian Crimea, a Ukrainian journalist is to go on trial for an article entitled ‘The Blockade is the necessary first step towards liberating Crimea’.   The civic blockade in question was peaceful and there is not one word in the text calling for violence, yet Russia is claiming that the journalist was guilty of “calls to action aimed at violating the territorial integrity of the Russian Federation”.  The charges are under Article 280.1 of Russia’s criminal code.  This new ‘offence’ was added to Russia’s arsenal of ‘anti-extremism’ norms soon after Russia seized Crimea, and has already, as feared, been used to imprison people merely for criticizing Russia’s invasion and annexation.

Courts under Russian control pass the sentences required, and Andrei Sabinin, one of Semena’s lawyers, is in no doubt that Semena will be convicted.  His only hope is the court can be persuaded to pass a more humane sentence than the mandatory minimum 5 years now stipulated.  The 66-year-old journalist has health issues, including a spinal injury which could lead to permanent disability since the investigators refused to allow him to travel to Kyiv for treatment.

In Soviet times dissidents were sent to labour camp for something called ‘anti-Soviet agitation and propaganda’.  In Russian-occupied Crimea, Semena is accused of violating Russian legislation “out of political animosity towards the Russian Federation.”  He denies the charges.

The indictment cites various places in the article, and describes how Semena sent the article to Radio Svoboda’s Crimean Service Krym.realii by email.

The degree of surveillance is also disturbingly reminiscent of KGB times.  Semena sent the article on September 11, 2015, immediately deleting deleted all record of the article and of his having sent it.  A criminal investigation was launched on April 13, 2016, with the decision stating the exact time that the article had been sent, meaning that somebody had been following his actions even on the computer.  The ‘evidence’ against him appears to be made up purely of screenshots of the article in process.

Krym.realii reports that there is also a ‘prosecution witness’ – a Crimean journalist Sergei Meshkovoi who is currently working for the Kremlin-backed militants of the so-called ‘Luhansk people’s republic’.  His ‘testimony’ appears to consist of the assertion that “material written by Semena was always insufficiently objective in describing the socio-political situation in Crimea, and Semena held clear pro-Ukrainian and anti-Russian views”.

The file material will produce ‘expert assessments’, both linguistic and on authorship. One positive note is that the defence has succeeded in getting an assessment by Mikhail Savva, a Russian academic now resident in Ukraine added to the material.  Savva confirms that Crimea is a part of Ukraine and Russian law does not apply on its territory.  The defence will also question Volodymyr Prytula, Chief Editor of Krym.Realii.

The FSB carried out searches of the homes of Semena and six other journalists on April 19, 2016, and soon afterwards brought the above-mentioned charges against Semena.

The second phase should be the total liberation of Crimea.  There was no call to anything in the text except total support for a full blockade.

Russia has long abandoned any pretence of adhering to the principle of the presumption of innocence, and by July 2016, Semena had already been added to Russia’s huge list of so-called ‘extremists and terrorists’.  The list includes most of the ever-increasing number of Crimean political prisoners, as well as Russian Tatar leader Rafis Kashapov who is serving a 3-year sentence for criticizing Russia’s annexation of Crimea, and poet Alexander Byvshev, now facing a second sentence over poems in support of Ukraine.