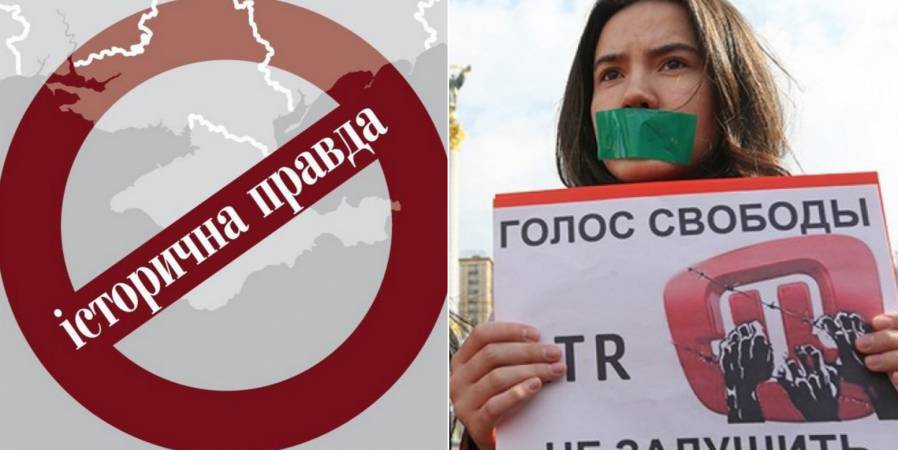 Where Russia cannot prosecute for annoyingly inconvenient but entirely provable truth, it opts for bans.  It has driven out most independent media from Russian-occupied Crimea and blocked access to many sites based in mainland Ukraine.  If before the bans have been directed against sites reporting on current events in Crimea, they now appear to have decided that truth about the past is also unpalatable, and have targeted the Kyiv-based website Istorychna Pravda [Історична правда, or ‘Historical Truth’].

The information comes from the website itself which says that it has received numerous reports from Crimea that the site is blocked.  There has been no formal notification from Russia’s effective censor Roskomnadzor, and the editors of Istorychna Pravda assume that an informal ban has been imposed, with providers simply stating that the site is unavailable.

Crimean readers have reported problems with access to the site since the summer of 2016, and the ban appears to have now become total.

The editorial board state that they understand that Istorychna Pravda “is an inconvenient resources for supporters of dictators, for those who consider (as Russian President Vladimir Putin once claimed – HC] that the greatest geopolitical catastrophe of the XX century was the collapse of the Soviet Union and who justify the crimes of totalitarianism by saying that “Stalin was an effective manager”. They see the ban on their site as yet further proof that censorship in occupied Crimea is being stepped up and that any position that does not concur with that presented by the official propaganda is subject to a ban.

Such actions are illegal and unacceptable and Istorychna Pravda calls on both Ukrainian and international human rights organizations to try to put pressure on the Russian government to get the ban removed.

While many bans do go through Roskomnadzor, last summer also saw other ‘informal’ bans on websites which provide truthful information about what is happening in Crimea.  One such temporary ban on Krym.Realii, the vital Crimean service of Radio Free Europe / Radio Liberty [RFERL] and other Kyiv-based websites reporting on Crimea came at the beginning of August, 2016.  There had been reports that various providers were blocking Krym.realii, Sobytiya Kryma, ATR, Chernomorskaya TRC, and some other sites from August 1, then in an interview the Russian-installed prosecutor Natalya Poklonskaya announced that Krym.realii had been totally blocked on Aug 3.  She said then that it was possible that only certain articles would be blocked but that they were seeking its total closure.

This has thankfully not yet happened. The restrictions had, in fact, come just days before Russia tried to create an international scandal, claiming that Ukraine had “made incursions” on Ukrainian Crimea and had attempted acts of ‘sabotage’.   The Russian occupiers’ imposition of an information blockade before an alleged surprise attack from Ukraine was just one of numerous reasons for the story’s lack of any credibility.  At least four Ukrainians illegally taken prisoner at the time still remain in Russian captivity.

Russia has been systematically stifling all freedom of speech since its invasion and annexation of Crimea in 2014.  One journalist still living in Crimea, Mykola Semena is about to go on trial on surreal charges, carrying a mandatory 5-year sentence for an article opposing Russia’s occupation of Crimea.  Most journalists understood the danger they were in and left Crimea must earlier.  The unique Crimean Tatar TV channel ATR and a number of other Crimean Tatar and other Ukrainian media were driven out of Crimea after Roskomnadzor effectively refused them registration.

In its Freedom of the Press 2015 Report, Freedom House improved Ukraine’s rating while giving a separate entry for Crimean under Russian occupation and a rating that placed the peninsula as one of its ‘worst of the worst’.

The situation since then has only deteriorated.