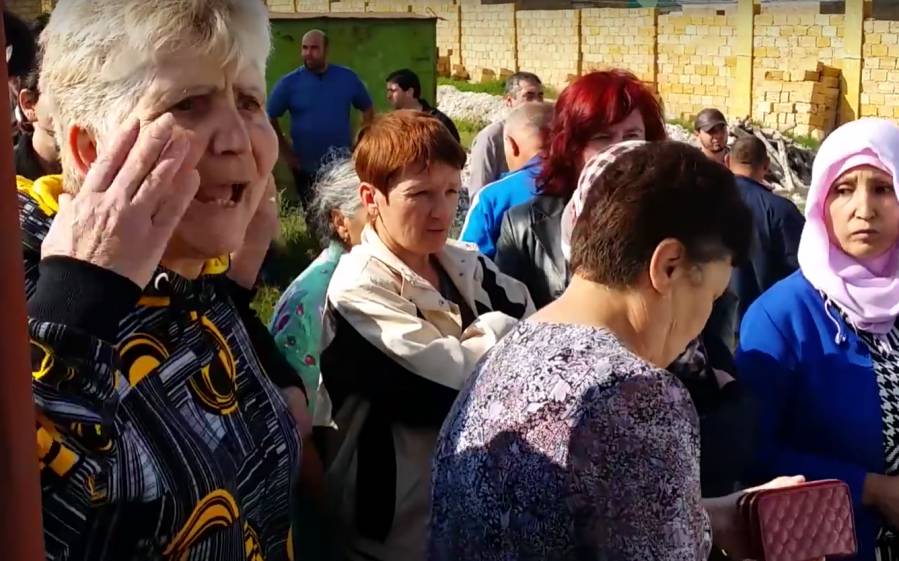 Russia is continuing to use docile judges in occupied Crimea to impose unwarranted penalties on Crimean Tatars for entirely peaceful demonstrations of solidarity.  All such penalties have been challenged, even reduced, although not one judge has had the courage to acknowledge that there had been no infringement, and that the proceedings are aimed solely at intimidation.

A court in Bakhchysarai on Jan 23 found Osman Belyalov guilty of ‘taking part in an unauthorized mass action’ on May 12, 2016 and fined him 10 thousand roubles.

The prosecution claimed that residents of Bakhchysarai had held an unauthorized protest outside the Salanchik Café over the armed searches and arrests of four men whom Russia has accused of involvement in Hizb ut-Tahrir, an organization which is legal in Ukraine and totally peaceful.

One of the four men – Remzi Memetov – is a cook at the Salanchik Café. Since a search was also carried out of the café, it was obvious that people would gather outside.  Belyalov, however, categorically rejects the charges laid.  He points out that none of the people gathered had any slogans, banners, etc. and the video footage shows clearly that there was no obstruction to transport.  They had simply gathered to discuss what was happening.

Belyalov’s counsel in court, Lilya Gemedzhy notes that all their applications at the beginning of the hearing were rejected, and the court made no pretence of studying the case material.  They have 10 days to appeal, and will certainly challenge the ruling.

Such challenges are important, and not merely on principle.  The Supreme Court in occupied Crimea on Jan 24 partially allowed the appeal brought by Enver Sherfiyev against administrative penalties imposed by the Bakhchysarai District Court.  Sherfiyev was convicted on Dec 6, 2016, also of having taken part in an ‘unauthorized rally’ and fined 15 thousand roubles.

The court had then ignored the arguments put by Sherfiyev’s lawyer Edem Semedlyaev that the people had gathered spontaneously, as they do during a fire or a road accident.  There had been no slogans and no demands were put.

Judging by details mentioned at the hearing on Jan 24, Sherfiyev had videoed the actions of the armed enforcement officers, planning to post them in social networks. It seems likely that this would have prompted him being singled out for the repressive measures.

The Supreme Court did reduce the fine to 10 thousand roubles, however still considered Sherfiyev’s actions to have constituted ‘participation in an unauthorized gathering’ (an infringement of Article 20.2, paragraph 5 of the Code of Administrative Practices).

He was the fourth Crimean Tatar to have been prosecuted merely for coming out onto the street on May 12, and asking why armed FSB and OMON riot police were once again carrying out searches of Crimean Tatar homes and taking their neighbours away in handcuffs.   The same ‘judge’ – Marina Nikishchenko from the Bakhchysarai District Court – had already fined three other Crimeans over the events on May 12:  Marlen Asanov; Emil Belyalov and Seiran Saliev.

Saliev’s conviction and 20-thousand rouble fine for supposedly ‘organizing an unsanctioned public event’ was upheld by the Crimean Supreme Court under occupation on Aug 23.

The Russian-controlled court chose to consider Saliev’s use of the loudspeaker in the local Mosque to inform residents that the armed searches were underway as having constituted ‘organization of a mass event’.

“I informed people that the enforcement bodies were carrying out searches. As a Muslim and a citizen. I informed of their actions. These were open investigative operations.  It is unwarranted to accuse me of organizing a meeting, I didn’t organize any meeting”, Saliev stated in court.

By May 12, 2016, the FSB had already arrested 10 Ukrainian Muslims, almost all Crimean Tatar, and the Crimean Tatar community would have understood immediately what the armed searches meant.

A lot of people came out on the street, understandably outraged.  The men behind masks taking 49-year-old Remzi Memetov away were asked by one elderly woman what right they had.

Four Crimean Tatars: Rustem Abilltarov; Zevri Abseitov; Enver Mamutov; and Remzi Mememov were arrested that day and remain in custody.  All four men were taken away and are now in custody, charged with involvement in Hizb ut-Tahrir.  This organization is legal in Ukraine and most countries, and Russia has never provided any sensible grounds for the decision, long kept secret, to declare the organization ‘terrorist’.  Despite the lack of any justification for criminalizing the organization or for accusing the men of involvement in it, they are among 19 men so far who have been convicted or are facing seriously long sentences.

Three of four Sevastopol Muslims arrested in 2015 - Ferat Saifullayev; Rustem Vaitov and Nuri Primov have just been sent to prisons in Russia after the Russian Supreme Court upheld 5-year sentences.  They and Ruslan Zeitullayev, whom the prosecution claimed had been the ‘organizer’, received minimum sentences after a  grossly flawed trial.  Such conveyor belt ‘Hizb ut-Tahrir cases’ are normally easy for the investigators and prosecutor and bring near-guaranteed promotion.  The prosecutor, however, needed to have an ‘organizer’ and three participants and therefore appealed against Zeitullayev’s sentence.  All sentences had been challenged by the defence as clearly unjust.  As is effectively always the case, the Supreme Court allowed the prosecutor’s appeal and rejected those from the defence.

It would be hard to call 5-year sentences against innocent men a good solution, but the charges and sentences against Zeitullayev and the other men still in custody, including the four in Bakhchysarai, are now likely to be even longer.  Russia has suddenly decided to accuse the men also of ‘violent attempts to overthrow the constitutional order”  (see: Russia Invades Crimea, Then Charges Ukrainians with ‘Violent Seizure of Power’