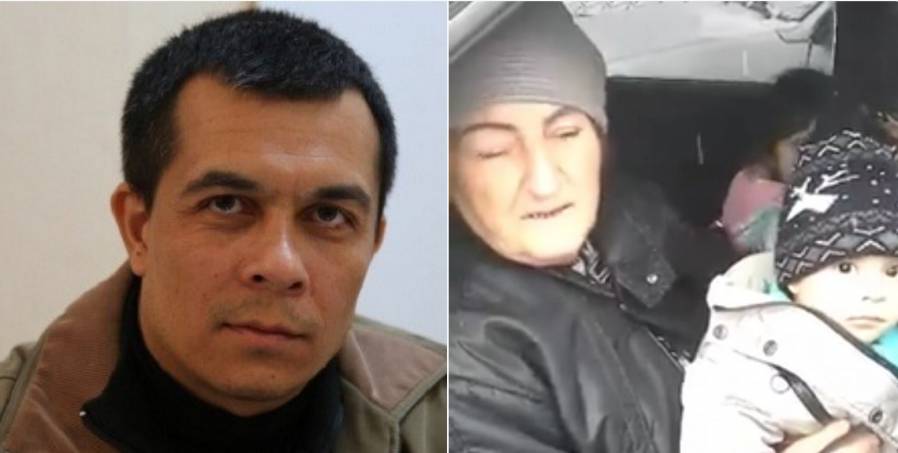 Kurbedinov (photo: Crimea SOS), his mother when she was finally able to take her terrified grandchildren away

The armed detention of prominent Crimean Tatar rights lawyer Emil Kurbedinov and armed searches of his offices and home have ended with him being sentenced to 10 days] imprisonment on administrative charges linked to a video posted quite legally in 2013.  This is the second act of harassment against lawyers defending Crimeans imprisoned on fabricated charges in Russian-occupied Crimea.

Kurbedinov was detained on Thursday, Jan 26.  He and his colleague Edem Semedlyaev were heading to the home of Seiran Saliev, a Crimean Tatar activist where a search was underway.

A search in the meantime had begun in the offices that Kurbedinov and Semedlyaev share.  Semedlyaev arrived, informed the officers that this was a law firm and that the material in it was therefore covered by legislation on lawyers’ confidentiality.  This was ignored and all official equipment, computers, etc. taken away.

A search was then made of Kurbedinov’s home, with the building being first surrounded by armed and masked spetsznaz special force officers.  For some time they refused to allow lawyer Dzhemil Temishev into the flat, and also tried to prevent Kurbedinov’s mother who arrived to take his small son (Arslan) and daughter (Kamila) away.  Once again Russia has extended its repressive measures to young children who were clearly terrified by what was going on.

Kurbedinov himself was taken against his will to the so-called Centre for Countering Extremism, and held there until the court hearing in the Zheleznodorozny District Court in Simferopol in the afternoon, under judge Tatyana Belnichuk.

The court was told by police major Renat Shambazov that the police had established on Jan 16, 2017 that on June 6, 2013 Kurbedinov had posted a video clip from a Hizb ut-Tahrir meeting on his VKontakte social network page.  The protocol claims that this was “a public demonstration of the symbols and propaganda images of the terrorist organization Hizb ut-Tahrir” and falls under Article 20.3 of Russia’s Code of Administrative Offences. Russia has declared this organization ‘terrorist’ without ever providing any grounds, and is now persecuting Ukrainians in Crimea for unproven involvement in the organization which has always been and remains legal in Ukraine. The post was from almost a year before Russia’s invasion and annexation of Crimea.

Kurbedinov is reported to have accepted that he could have posted the recording on a social network.  Back in 2013, he says, there were a lot of Hizb ut-Tahrir meetings.  There was no question of this being propaganda, however, and the organization was quite legal in Crimea. He had posted it and forgotten all about it.

He asked for the court to fine him, however this was clearly not the instruction from above and the court produced a 10-day jail term which will assuredly be appealed against.

This new escalation in repression comes a day after Russian lawyer Nikolai Polozov was effectively abducted by the FSB who are trying to prevent him from defending Crimean Tatar leader Ilmi Umerov (See:  Russian FSB stage abduction to deprive Crimean Tatar leader of his lawyer).  Polozov and Kurbedinov are the two lawyers representing Umerov who is facing ‘separatism’ charges for stating in an interview that Russia should be made to leave Crimea.

35-year-old Emil Kurbedinov has long been aware that he could also be targeted by the Russian FSB.  He has remained unwavering in his defence of the ever-increasing number of Crimean Tatars and other Ukrainians held prisoner on fabricated and absurd charges under Russian occupation.

On August 4, 2016, while Kurbedinov and Semedlyaev were away defending four Crimean political prisoners on trial in Rostov (Russia), an attempt was made to break into their offices.  There were strong grounds then for assuming that this was the work of the FSB and ‘Centre for Countering Extremism’.

They have now escalated the repression.  In a statement on Thursday afternoon, Ukrainian human rights groups demanded an end to persecution of lawyers in occupied Crimea.

The detention of Nikolai Polozov, they note, came immediately after his return from a session of the Parliamentary Assembly of the Council of Europe when he had reported on political persecution in Crimea.  The attempt to force him to give testimony in the case of his own client is against the law.

It is clear, the human rights activists say, that the actions of Russia’s security service are directly linked with Kurbedinov’s human rights activities and aimed at obstructing his professional work, depriving civic activists and others of defence and intimidating other rights defenders.