Igor Kotelyanets: On my brother Yevhen Panov & other political prisoners 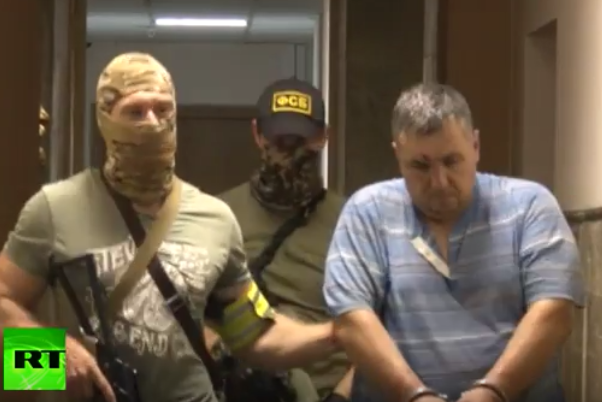 Distinguished delegates of the Parliamentary Assembly of the Council of Europe, participants of the meeting,

My name is Igor Kotelyanets. I am a blood brother of Eugene Panov, Ukrainian political prisoner, whom Russia continues to hold hostage for recent six months. My English is not very good; therefore, I have written here in my speech what I want to tell you today.

My brother Eugene Panov is 39 years old. He worked as an ordinary driver in Energodar city, at the biggest both in Ukraine and Europe Zaporizhzhia Nuclear Power Plant. In 2014, as Ukraine faced the war, Eugene Panov organized an initiative group in our city to protect our city. This group of volunteers started preparations to defend our city due to prevent the “energy heart” of my country from the intervention of the Russian mercenaries and their seizure of power. Later, Eugene Panov established the non-governmental organization “Defenders of Ukraine” and became a volunteer. Together with other Ukrainian volunteers he helped to supply Ukrainian armed forces with foodstuffs, medicaments, collected aid from all regions of Ukraine and brought it to soldiers. In 2016, he became the member of executive committee in the city council. He was responsible for the patriotic education of children in schools.

On August 6, 2016 Eugene Panov disappeared. He went out of the city on friends’ invitation and then contact with him ended off. Later, we got to know that this trip was spontaneous. Someone from volunteers’ movement called him and asked for support. Allegedly one Ukrainian family, which at that time was on the territory of the occupied Crimea, faced a significant threat. Eugene was asked to help by bringing these people to the land area of Ukraine and save therefore their lives. On August 6, 2016, he went by his own car to Crimea, saying that he would be back quickly. When entering Crimea, he was captured by Russian special services beyond the administrative line. During next days, we had no information about him. Only in four days, Russian mass media reported, that Russian special services had captured him and hold as the hostage. Eugene Panov was accused to organize subversions in Crimea. The only so called argument is a video, where Eugene testifies against himself, giving testimonies in favour of what special services have incriminated him.  On the video, he behaved unnaturally: unthinking eyes, exhausted look, and face, swollen because of violence. He spoke with learned by the heart clerical text that had never happened with him. In the first two months, we did not know anything about Eugene’s state of health, conditions of detention, the prosecution details. Russia did not let us or our lawyers see him. Only two months later, when our lawyer managed to break through to Eugene Panov, we found out the truth. Eugene had been tortured and forced to read the text previously drawn up by the secret services, where he told about Ukraine allegedly trying to organize sabotage in  Crimea. Russia has used the video to discredit Ukraine in the eyes of the world community, to accuse of terrorism and non-compliance with obligations to maintain the silence mode.

Now, we already know the full picture of what had happened. False confessions of Eugene Panov were obtained under torture: he signed all the documents that the FSB gave him, not knowing what was there, and spoke to the camera under their dictation.

He had been detained in the night of August 7th. When he crossed the line of demarcation between the mainland Ukraine and the Crimean Peninsula, the Russian border guards asked him to leave the car for inspection. There, at the entrance of the mobile trailer they hit his head with something hard. He fell down and felt that lied in a pool of his own blood. Inside the trailer, he saw several people in masks. They put on his head a tight bag and took him to some room, where he was held until the evening. All this time, Eugene Panov was tortured. He was beaten with an iron pipe on the head, back, kidneys, arms, legs, they also tightened the handcuffs back to numb hands. They hanged Eugene by handcuffs, causing him feel a wild pain. He asked to stop torture and to explain why he was tortured. They laughed at him and continued to mock.

During the next torture, they put on his penis a collar and tighten it until it was blue. After a while, Eugene with a bag on his head was taken out and was told that he would be shot. Eugene heard reloading. When the bag briefly pulled off the head, the detainee saw two men, who tortured him. Eugene Panov is ready to recognize them.

After some time, without having removed the bag from his head, he was taken aside to another room, and there the tortures continued: they stuck electric shocker’s electrodes with the duck tape to his knees and lower back, supplied power and Eugene Panov lost consciousness. From electric shocks Eugene lips cracked. All this time, they hit and kicked Eugene. He had not been given any food for about ten days.

It has been six months since then. False confessions are the only so-called evidence of the FSB against my brother. Eugene Panov was transferred from the Crimea to Moscow and is currently being held in the Lefortovo prison. Herewith, his case had not been transferred from the Crimea to Moscow yet. Thus, the investigation is trying to prevent the lawyers to carry out full protection. Since the investigating authorities and the accused are at one and a half thousand kilometers from each other, lawyers are not able to be in two places at once. We, the family of Eugene Panov, did not hear Eugene’s voice for six months: the Russian investigation still does not allow us to see Eugene, or else at least talk on the phone. The Russian authorities still groundlessly do not allow Ukrainian consul to meet with Eugene.

Three other citizens of Ukraine - Andriy Zahtey, Ridvan Suleymanov and Volodymir Prisich, were detained within the case of my brother Eugene Panov. None of them now each other. Moreover, they have never seen each other.

Andrei Zahtey was detained by the Russian security services also under mysterious circumstances. He worked as a taxi driver, when received an order to come to one of the Crimean settlements. At the destination, employees of the Russian special services were waiting for him. Andrei with a bag on his head was transported to a building, where he had been beaten for two days with an enforce to confess guilt that he allegedly was a member of a subversive group prepared the explosions in Crimea. Wounds appeared on Andrei’s wrists caused by tortures. They stuck electric electrodes to his legs and buttocks and supplied power. As Andrei refused to confess to actions that he did not commit, they began to stuck electrodes to the genitals. Because of a pain, he lost consciousness.

Ridvan Suleimanov, the third figurant of the case of so-called diversionists, was detained by the Russian special services a month before the date when Russia announced about the alleged attempts of Ukraine to prepare a terrorist act. The security services accused publicly Ridvan in the preparation of an explosion on August 6 in the Simferopol airport, although by that time Ridwan had been in the hands of the security services for several weeks. The fate of the fourth figurant Vladimir Prisich is still unknown.

The story of the arrested Volodymir Dudka became notable. Before the annexation of the Crimea, he worked in the Ministry of Emergencies of Ukraine on the peninsula. He was arrested in the morning on the way to the hospital, where he was going with aggravation of the gastric ulcers. More than a week his relatives could not find Vladimir. The official services of the occupation authorities in Crimea refused to provide them information. Later it became known that Volodymir Dudka was in an unknown room, where he was brought by employees of the FSB. For two weeks, he was kept without medications, which were prescribed to him by doctors because of his heart and stomach diseases. The other two detainees Dmytro Shtyblikov and Oleksiy Bessarabov are well known experts in Ukraine who published the magazine "Black Sea Security" in Sevastopol in 2005-2014.

At the moment, all the hostages of the Russian authorities are accused in preparing diversions and kept prisoners. The courts are held behind closed doors, and they extend terms of arrest each time.

Why is it necessary for Russia? We have no illusions, these stories are an integral part of the aggressive Russian policy, which aims to discredit Ukraine in the eyes of the international community, intimidate the Crimean population by an alleged threat from Ukraine.

We, the relatives of the hostages of the Kremlin, who are the victims of the aggressive policy of Russia, ask you to help us to resist the brazen and widespread violation of basic human rights, which is demonstrated by Russia. We must make Russia stop waging war against our relatives, every day torturing them, exposing their lives to danger, impeding us, lawyers and consuls to meet the detainees, give them necessary things and medicines. Eugene Panov’s mother, my mother, is in constant fear that the special services of the Russian Federation would kidnap me as well. Living in constant fear has become the norm for those whose neighbor is one of the biggest states, which does not know neither fear, nor pity.

Thank you for your attention!