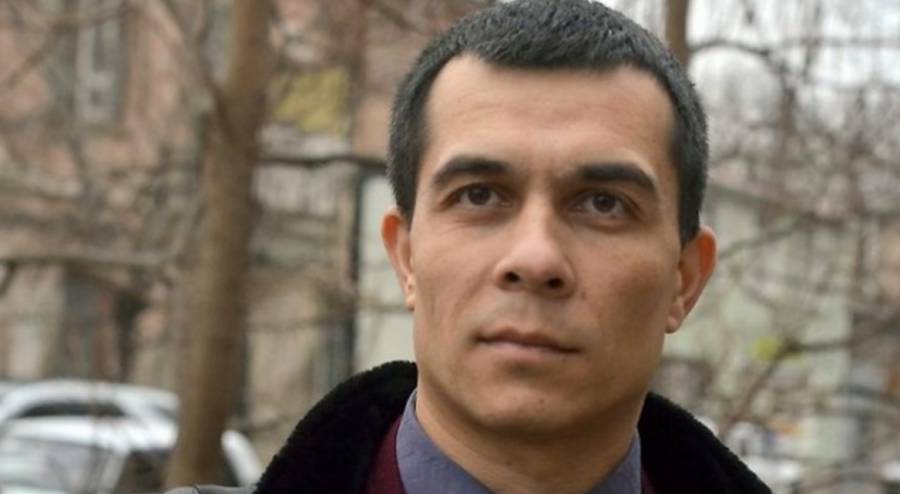 Several dozen Russian lawyers have issued a hard-hitting statement in support for jailed Crimean Tatar rights lawyer Emil Kurbedinov and his colleagues who, they stress, are providing the last obstacle to total lawlessness in Russian-occupied Crimea.  Kurbedinov has long been aware that the role he is playing both in defending victims of persecution and in highlighting rights violations makes him ‘Enemy No. 1’ for the FSB and therefore in danger.

Kurbedinov is acting for defendants in virtually all of the ever-increasing number of politically motivated prosecutions in Crimea, and was on his way to the home of another victim - Crimean Tatar activist Seiran Saliev – when detained. As the wife of one political prisoner wrote, it is Emil everybody calls in the first instance.  By imprisoning him on nonsensical charges linked with a video reposted on a social network in 2013, the FSB have deprived other political prisoners of defence for the next 10 days.   There are very real concerns that Russia may be testing the water with an administrative arrest, before trying to remove Kurbedinov altogether through some kind of fabricated criminal charge.  Other lawyers defending Crimean prisoners are also at risk, as the effective abduction by the FSB of Russian lawyer Nikolai Polozov a day earlier made clear.

A few months ago, Kurbedinov spoke of the threats he receives as a rights lawyer.  “They hint that you’re not behaving right.  The hints come to you via people close to you – colleagues, acquaintances, friends.   They’re contacted by the FSB and it gets passed on to you.”.  With lawyers who are just starting out, he says, that can have an impact, although it all depends on the person.  That can be combined with a call from a high-ranking official warning you to quit your job, or you’ll end up jailed.  Kurbedinov then stressed that this was clearly a threat, since he and his colleagues work strictly within the framework of the law.  He explained them as being because they approach the cases objectively and make them public.  Publicity is what the enforcement officers really hate, and that’s what makes such lawyers Enemy No. 1.

This role is especially evident with the imprisonment on concocted ‘terrorism’ charges of 19 Crimeans, most Crimean Tatar, accused of involvement in Hizb ut-Tahrir, a Muslim organization which is legal in Ukraine and most countries, but which Russia has decided to label ‘terrorist’.  Russia has been arresting Muslims in Russia for the last 15 years and sentencing them to huge periods of imprisonment with virtually no public outcry.  It is thanks to Kurbedinov, Edem Semedlyaev and other courageous lawyers, that the  gross violations and lack of any grounds for such prosecutions have been highlighted in occupied Crimea.

Kurbedinov was detained and jailed for 10 days for posting a video of a Hizb ut-Tahrir meeting.  It was very clearly a pretext and lawless one at that, since the repost was a year before Russia’s annexation and pertained to an organization which remains legal to this day in Ukraine.

The charge against Kurbedinov was over a so-called administrative offence, yet, both Kurbedinov in reports to the Crimean and Russian Federal Chambers of Lawyers and the lawyers in their statement of solidarity point out that his office and apartment were subjected to searches over a supposed criminal case about the activities of that organization.  Since Kurbedinov is defending several men facing Hizb ut-Tahrir charges, this was a flagrant violation of lawyer’s confidentiality, as well as of his clients’ right to a fair trial.

The Russian lawyers’ letter goes on to say that:

“Since 2014, the Russian authorities have systematically crushed fundamental rights and freedoms in Crimea. Freedom of assembly, of conscience and of expression have been effectively destroyed.  Criminal prosecutions and administrative arrests and fines are widely used against people of any views and areas of activity – journalists, anarchists, Muslims merely for expressing their views, for a flag hung in a car, for criticizing the authorities, for an attempt to hold a peaceful picket or gathering. Since 2014, Article 20.3 of the Code of Administrative Offences (public demonstration of Nazi symbols or symbols of extremist organizations) which Kurbedinov was arrested over, has been used on a mass scale by the Russian authorities for political purposes.

There are no human rights organizations in Crimea, no public monitoring commissions, and access by independent monitoring missions is restricted to a minimum. The court system in Crimea has been eroded to mere formal institutions and the Crimean courts do not implement the fundamental norms of legislation, ignoring the rulings and explanations of higher courts of the Russian Federation.

The last obstacle on the path to total lawlessness has been lawyers, those individuals who are willing to actively and openly defend journalists, activists and ordinary people unwarrantedly labelled as ‘terrorists’ or ‘saboteurs’. Kurbedinov is defending Ukrainian journalist Mykola Semena, Crimean Tatar leaders Akhtem Chiygoz and Ilmi Umerov and many others.

There is no doubt that the simultaneous arrest of a lawyer for posting a video on a social network and the searches of his home and office were of a planned and political nature in order to intimidate, look for compromising material and to remove him from carrying out his professional duty.

We are appalled by the position of the Attorney’s Chamber of Crimea who claimed that the persecution of their colleague was ‘lawful’.

As Russian lawyers, some of whom are working in Crimea, we express solidarity with out colleage and call upon the Russian Federal Chamber of Attorneys to take a number of measures in his defence and to not allow his purely political persecution.”

The Russian Memorial Human Rights Centre has also demanded an immediate end to the persecution of Emil Kurbedinov on trumped up extremism charges.  This is nothing more than unacceptable pressure by the security service on a lawyer expressing a critical assessment of the human rights situation in Crimea and an attempt to obstruct his professional activities.

Russia is trying to silence voices who speak out and who provide real defence for the ever-increasing number of victims of persecution in occupied Crimea.  The consequences if they are allowed to persecute lawyers are grave.