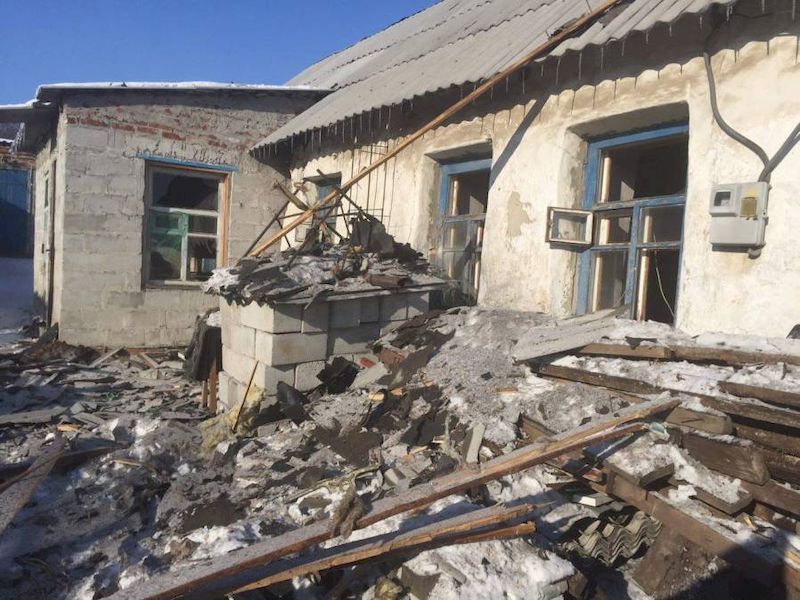 Russian President Vladimir Putin’s Press Secretary has called the “escalation in Donbas grounds for swift establishment of dialogue between the Russian Federation and the USA, including over Ukraine”.  Dmitry Peskov did not elaborate on what this ‘dialogue’ was supposed to entail, but a prominent Russian political analyst suspects that Russia is trying to foist an interpretation of the Minsk agreement that places the full onus of implementation on Ukraine.  Since implementation of the so-called political demands of the agreement are impossible without Russia’s withdrawal from the conflict, meaning the removal of heavy weaponry and securing of the Russian-Ukrainian border, the ploy is to place the blame for the Minsk failure on Ukraine and give the new US administration under Donald Trump an excuse to lift sanctions.

Russia has, as usual, denied any involvement in the shelling of Avdiivka which began on Jan 28.  The Russian state-controlled media claim there to be a general escalation in fighting between the militants of the so-called ‘Donetsk people’s republic’ [DNR] and Ukrainian military, with this supposedly ‘provoked’ by Ukraine.

All of that begs the issue of why Avdiivka has come under attack from Russian GRAD missiles and other prohibited heavy artillery, and why there is considerable evidence that at least some of the shelling is from residential areas in militant-controlled Donetsk.

Andrew Kramer, writing for the New York Times, reports that “journalists who visited the town reported evidence of a psychological warfare operation of a sophistication that suggested Russian involvement. Cellphones in the town received text messages addressed to Ukrainian soldiers, who often carry phones, saying, “You are just meat to your commanders.”

It is worrying that, while Russia’s involvement was acknowledged in the reaction from the US Mission to the OSCE on Jan 31, there is no mention of Russia at all in the US State Department statement.  If, as has been suggested, Russia is testing the ground to see how far it can go, that omission is ominous. The State Department does, however, stress US commitment to full implementation of the Minsk Agreement.

A ceasefire apparently brokered in Minsk on Feb 1 is reported to have lasted all of 15 minutes, and on Wednesday evening the relentless shelling of Avdiivka was continuing.   The ongoing shelling has meant that the electricity which was totally down and disrupted water supplies cannot be reinstated.

The only cheering note is in the efficient cooperation between government bodies, the military and civic organizations.  Early on Feb 1, Kostyantin Reutski, Hromadske journalist and civic activist, praised the well-coordinated work, in ensuring tents with heating, hot drinks, police reinforcements.  Those who want to be evacuated are able to leave.

“How we have all responded to the crisis in Avdiivka is inspiring.  You want to say thank you again and again.”

Hundreds attended a funeral service on Maidan in Kyiv for the first soldiers killed in the shelling.  The number of soldiers and civilians known to have died stands at 19, and there are many others gravely injured.

So what is the death and destruction for?

Andrei Piontkovsky rubbishes any suggestion that the Kremlin-backed militants are acting on their own accord.  His confidence that the order came from the Kremlin is confirmed by the use of GRAD missiles and other heavy artillery.  He believes it possible that Russian military personnel are in charge of the offensive.

He suspects that the Kremlin was inspired by Donald Trump’s electoral victory in the USA and now hopes to come to a deal with the Trump administration on more advantageous conditions.  The Kremlin’s scenario, he says, is to push the so-called ‘republics’ into Ukraine’s body so that they fall apart from within.  Russia doesn’t need Donbas, it wants all of Ukraine.

Putin is engaging in a form of blackmail: until the political part of the Minsk accords (local elections, an amnesty law, decentralization) is fulfilled, the shelling will continue.  This, he stresses, is despite the fact that the first point of the Minsk Agreement is a cessation of fire and demarcation zone.

This is not a new ploy.  President Petro Poroshenko’s Humanitarian Envoy in Minsk recently noted that Russia was trying to discredit the Minsk Agreement so that it could get sanctions removed, while staying put in Ukraine.

Another motive for the carnage and suffering caused in Avdiivka is to convince Ukrainians that the Minsk accords are not working and to give them up.

Ukrainian political analyst Serhiy Taran has warned against such calls, using arguments very similar to those presented by Piontkovsky.  The Minsk Agreement is the only instrument which enables the West to put pressure on Russia and continue sanctions.  If Ukraine rejects the agreement, any means of pressure on Russia will disappear.

This is the one agreement which Russia has, as a party, committed itself to, and all official European documents state clearly that the sanctions are extended due to Russia’s non-implementation of the Minsk Agreement.

Taran says that any politicians in Ukraine who call for the rejection of the Minsk Accord are simply playing into the Kremlin’s hands.  They may well be also playing into the Trump Administration’s hands.  Trump, himself, has repeatedly made his willingness to reach a ‘deal’ with Putin clear, with this seen also in his choice of Secretary of State, Rex Tillerson, who has long had ties with Putin and who has previously made opposition to sanctions clear. What better gift than for Ukraine to be abandoning the only international restraint to the Kremlin’s appetite for destabilization of Ukraine?