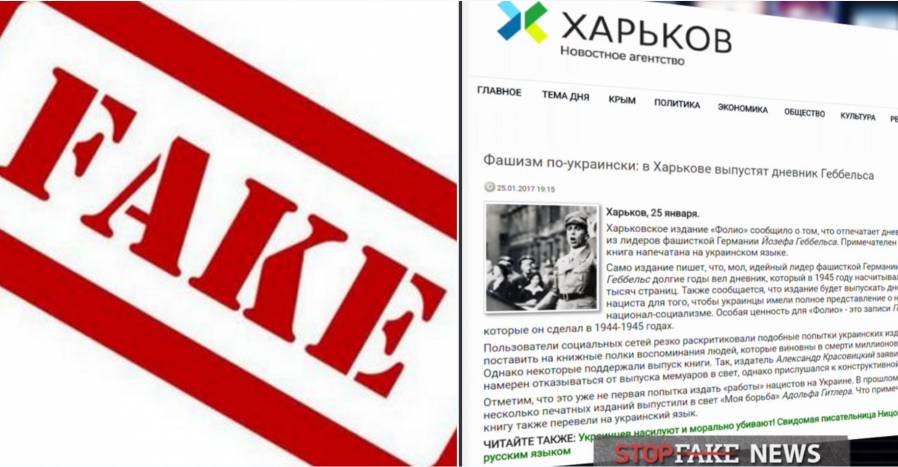 An apparently ‘Ukrainian’ website often quoted in the Russian media has a St. Petersburg address and is probably one of the ‘troll factory’ enterprises owned by Yevgeny Prigozhin, a millionaire often referred to as Russian President Vladimir Putin’s favourite chef.

A social psychologist once found that asking if you could jump the queue to the photocopier because you had to copy something was as likely to succeed as giving a proper reason.  The word ‘because’ was usually enough, people didn’t listen further.  Most media audiences behave identically when it comes to information sources.  Sources need to be cited, but are seldom checked.  Certain principles must be followed, but these are easy to remember and not much harder to fake.  If the information is aimed at slurring Ukraine or distorting the facts about the Russian-backed, financed and manned military conflict in Donbas, then best to quote Ukrainian media.

Sometimes the links to the supposed source of evidence, for example, that ‘separatist’ movements are spreading like wildfire in Ukraine stop working almost immediately.  Other credulous sites will have reposted the information, so no need to leave incriminating evidence.  The Kremlin-funded RT or Russia Today has long tried to steer clear of other countries’ press watchdogs by broadcasting brazen lies, for example, about Ukraine ‘committing genocide’ in Donbas, and then deleting them.

What is wanted are ‘Ukrainian media’ who can be relied on to provide only anti-Ukrainian material.  The Kremlin’s proxies in the so-called ‘Donetsk and Luhansk people’s republics’ are invariably quoted as reliable sources, but their political bias is hardly a secret, so other, ostensibly non-partisan sites are preferred.

The Kharkov News Agency (nahnews.org) surely fits the bill.  The word ‘agency’ creates the illusion of variety of sources and correspondents, while the regional link explains the fact that the site is little known.   This is perfect for Russian news stories on television or for propaganda channels in other countries where the supposed agency’s clear bias will probably go unnoticed.

If, back in 2014/15, the website’s material could end up reposted through lazy ‘cut and paste’ mentality, by now its aggressively pro-Russian agenda and constant disinformation are well-known in Ukraine.  For that reason, further investigation seems called for of possible collusion between the site and Kharkiv Izvestia, a paper totally under the control of Mayor Hennady Kernes but paid for from the city budget.

The site’s real location and ownership make it clear that the issue at stake is not simply freedom to express views critical of the current government in Ukraine.

The unnamed ‘editors’ of the ‘Kharkov News Agency’ claim that it was originally created in Kharkiv, but was physically destroyed, and forced to move to St. Petersburg and Luhansk “after the state coup in Ukraine in February 2014”.  The remaining journalists supposedly fled in these directions “from inevitable reprisals”. They go on to claim that the “Ukrainian nationalists, having seized power, continue to openly boast of hundreds of unmarked graves in the forest around Kharkiv where the nationalists took their political opponents, having first subjected them to savage torture”.  Not one of these killings has been solved, they say, preferring not to mention the lack of any evidence of such graves, or of the alleged ‘boasting’.

Detector Media points out that there is no evidence that the ‘nahnews.org agency’ was ever based in Kharkiv or anywhere in Ukraine.  The domain address was purchased on August 25, 2013 by Yevgeny Zubarev, who is also chief editor of the Federal News Agency.  This is believed to be part of the so-called Internet Research Agency, otherwise known as a ‘troll farm’, employing hundreds of Russians to post pro-Kremlin propaganda online under fake identities.  Adrian Chen’s investigation for the New York Times of this troll factory led to the investigative journalist being targeted, together with Ukraine and political opponents in Russia.

His account of these troll activities, including elaborate ‘hoaxes’ about fake emergencies, based on public fears and prejudice, was written back in June 2015.   The article seems chillingly relevant after the recent presidential elections in the USA, and as evidence mounts that Russian efforts to influence those elections are likely to be repeated in European elections in 2017.

The ‘troll factory’ is very widely believed to be financed by Yevgeny Prigozhin who almost certainly owes his millions, at least in part, to the favour which Putin has shown him and his restaurant change.  Prigozhin was recently sanctioned over another of his activities – the financing of a ‘private army’, sending mercenaries to fight in Donbas and in Syria.  Putin was recently spotted honouring Dmitry Utkin (‘Wagner’), the head of these mercenaries at a Kremlin reception to mark ‘Heroes of the Fatherland Day’.

The St. Petersburg ‘Ukrainian website’ was used at the end of January by a number of Russian websites to circulate a totally mendacious story about plans by a Kharkiv publisher to publish some of the memoires of Joseph Goebbels.  The publisher’s words were deliberately cut, so that the audience heard only that Goebbels “was much needed in Ukrainian society”, and not why.  In fact, the publisher Oleksandr Krasovytsky had stated very clearly that the decision was taken because of the similarities between Goebbel’s ideas about propaganda and manipulation and what is happening in Putin’s Russia.

Examples of deliberate lies and misinformation can be multiplied, and it would require an unrealistic feat of credulity to believe that Russia Today, Sputnik and other Russian sources are not well-aware of the geographical address and the worth of the information the Kharkov News Agency offers.