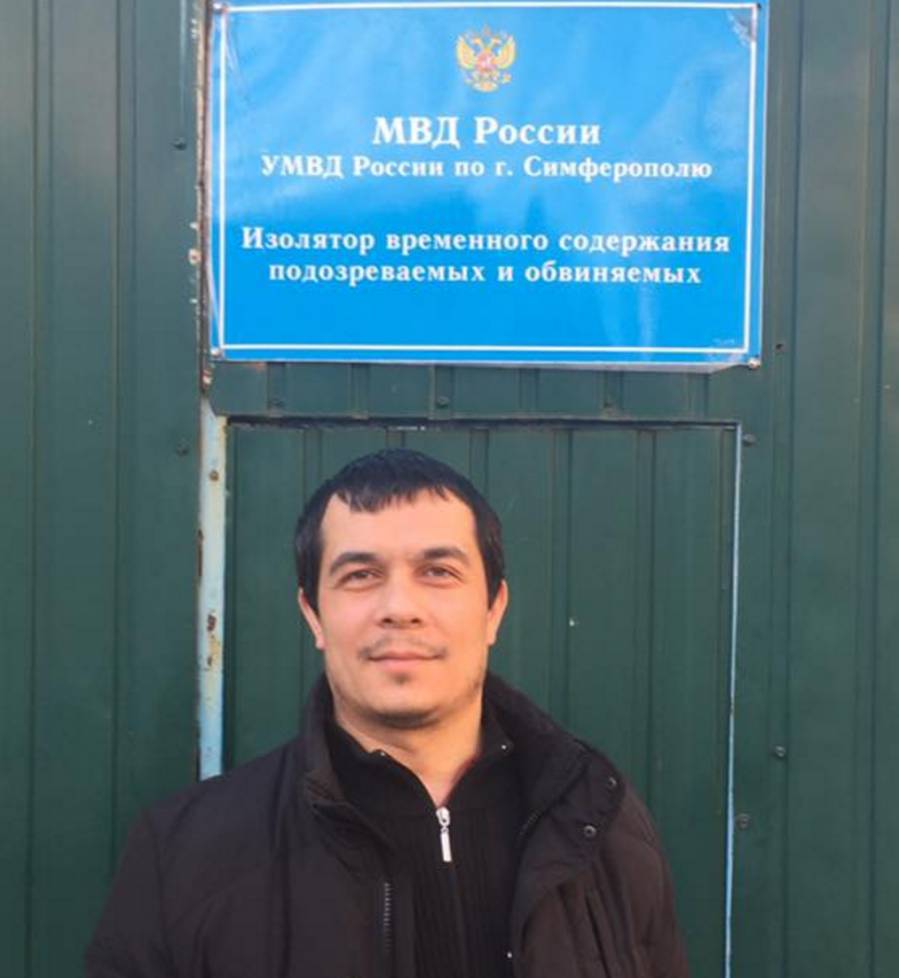 If Emil Kurbedinov has been a thorn in the side of Russia’s FSB because he highlights  the lack of grounds for the charges against many victims of repression, the FSB miscalculated badly by deciding to arrest and jail him.  Kurbedinov was freed on Sunday, Feb 10, and stated immediately that he would continue his work.  In the meantime, the repressive measures against a prominent rights defender and lawyer elicited huge reaction from the international community.

Abdureshit Dzhepparov, head of the Crimean Human Rights Contact Group, says that whoever it was who issued the order to arrest Kurbedinov worked “200%” in their favour.  You need to see the positive side, he added, and Emil’s imprisonment had not been for nothing.

There remains, however, a lot that is negative.  Kurbedinov was sentenced to a 10-day term of administrative arrest for the reposting in 2013 of a video which was then and remains legal in Ukraine.  Although he has been freed, the FSB is holding the computers and other equipment removed during armed searches of his law office and home, with these containing confidential information about other victims of persecution whom Kurbedinov is defending.

This is a flagrant violation both of Kurbedinov’s rights as a lawyer and of his clients’ right to a fair trial, yet Russia’s Human Rights Ombudsperson sees no grounds for concern.  During a phone call on Feb 3, Ukrainian Ombudsperson Valeria Lutkovska raised issues regarding both Kurbedinov’s arrest and ensuring the right to defence of his clients.  Tatyana Moskalkova asserted that Kurbedinov’s clients’ rights had been observed since they had been able to use the services of lawyers whom they had agreed would represent them.  She added that the court had provided a guarantee that hearings would not be held without lawyers.

Moskalkova, a former Police Major General and Russian MP, was appointed to her new post in April 2016.  In her first interview she claimed that there were no political prisoners in Russia, only ‘extremists’, and that the subject of human rights was being used by the USA and Western bodies “to destabilize and put pressure on Russia”.

Kurbedinov’s colleague Edem Semedlyaev explained on Friday that the FSB had extended their extraordinary confiscation of all computer technology for a further month.  This is clear pressure and intimidation on defence lawyers and has been condemned by Ukrainian and international human rights organizations, as well as by many fellow lawyers in Russia.

35-year-old Emil Kurbedinov has been tirelessly defending the ever-increasing number of Crimeans facing politically-motivated charges under Russian occupation.  He has been open in his condemnation of political persecution and recently noted that he had become ‘enemy No. 1’ precisely because he makes the activities of the FSB public.  That role has been particularly vital with the imprisonment on concocted ‘terrorism’ charges of 19 Crimeans, most Crimean Tatar, accused of involvement in Hizb ut-Tahrir, a Muslim organization which is legal in Ukraine and most countries, but which Russia has decided to label ‘terrorist’.

Kurbedinov was detained on Thursday, Jan 26.  He and Semedlyaev were heading to the home of Seiran Saliev, a Crimean Tatar activist where a search was underway.

The armed and masked men carried out searches both of his home and of the two men’s offices, with the spetsnaz men guarding his flat for some time refusing to allow his lawyer in, or Emil’s mother who had come to take her two terrified grandchildren away.

Kurbedinov himself was taken against his will to the so-called Centre for Countering Extremism, and held there until the court hearing in the Zheleznodorozny District Court in Simferopol in the afternoon, under judge Tatyana Belnichuk.  The court was told by police major Renat Shambazov that on June 6, 2013 Kurbedinov had posted a video clip from a Hizb ut-Tahrir meeting on his VKontakte social network page.  The protocol claims that this was “a public demonstration of the symbols and propaganda images of the terrorist organization Hizb ut-Tahrir” and falls under Article 20.3 of Russia’s Code of Administrative Offences.

The pretext was insultingly absurd, however the court had clearly been instructed to imprison him for 10 days.  The appeal against the manifestly unwarranted sentence was rejected.

The arrest of Kurbedinov came a day after Russian lawyer Nikolai Polozov had been effectively abducted by the FSB who are trying to prevent him from defending Crimean Tatar leader Ilmi Umerov (See:  Russian FSB stage abduction to deprive Crimean Tatar leader of his lawyer).  Polozov and Kurbedinov are the two lawyers representing Umerov who is facing ‘separatism’ charges for stating in an interview that Russia should be made to leave Crimea.

Russian media efforts to present open intimidation of lawyers in Russian-occupied Crimea as a ‘special operation against extremists’ are continuing and there are real grounds for concern at this new escalation in repression.