Russian Prosecutor General given power to close media for ‘discrediting the army’ through truth about the war against UkrainePoisoned Putin critic Vladimir Kara-Murza: "What can I do if someone wants to kill me?"Prominent Kremlin Critic Hospitalized In Moscow
• Topics / News from the CIS countries 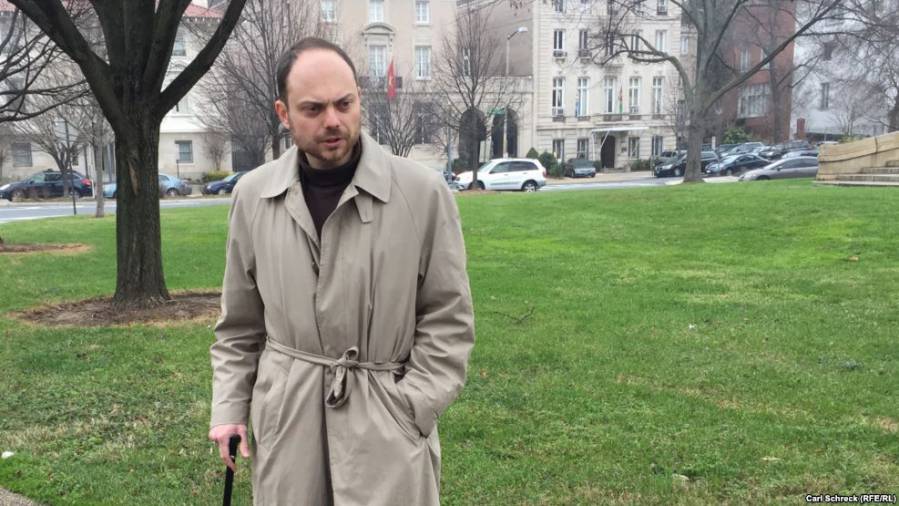 The wife of well-known Kremlin critic Vladimir Kara-Murza, Jr., who fell critically ill last week in Moscow for the second time in two years, said doctors have diagnosed him with "acute poisoning by an undetermined substance."

Yevgeniya Kara-Murza told RFE/RL on February 6 that samples of her husband’s blood, hair, and fingernails have been sent to a private laboratory in Israel in an effort to identify the toxin that triggered his sudden illness.

"We want to get some samples tested again to try to determine what this ’unidentified’ substance may be," she told RFE/RL in a Facebook message.

Doctors at the Moscow hospital where Kara-Murza is being treated could not immediately be reached for comment.

Kara-Murza, 35, was hospitalized on February 2 and placed in an intensive-care unit. His wife said later that her husband had suffered kidney failure and was on life support after being placed in a medically-induced coma.

She said he was still in a coma on February 6 but his condition had stabilized.

His friends and family say his symptoms closely resemble those he suffered in May 2015, when he abruptly fell ill in Moscow and was hospitalized in critical condition.

Kara-Murza, who spent two months in hospitals in Moscow and outside Washington, D.C., believes his 2015 illness was the result of a deliberate poisoning with a sophisticated toxin and that he was targeted for his political activities.

His doctors in Moscow at the time posited that his near-fatal illness had been linked to his ingestion of a prescription antidepressant, though independent experts told RFE/RL at the time that it would be highly unusual for the drug to trigger such a severe reaction.

His wife said on February 6 that since his recovery from his first illness, her husband had not taken any medicine and that his body was "completely healthy."

After he was hospitalized last week, U.S. lawmakers urged an investigation into his case and called on the administration of U.S. President Donald Trump to speak out on his behalf.

Kara-Murza splits his time between Russia and Centreville, Virginia, a Washington suburb where he resides with his wife and three children.

He is a coordinator for former tycoon Mikhail Khodorkovsky’s nongovernmental organization, Open Russia, and has advocated for sanctions against Russian officials and media executives before U.S. lawmakers.

At the time of his most recent hospitalization, Kara-Murza had been traveling around Russia, conducting screenings of a documentary about his close political ally, the late opposition politician Boris Nemtsov, who was shot dead outside the Kremlin in February 2015.

With reporting by RFE/RL’s Russian Service