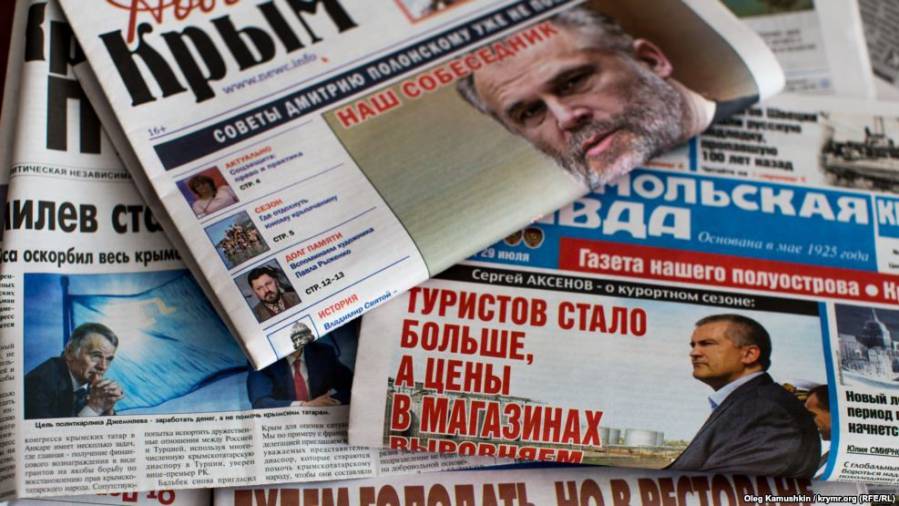 The Russian media has widely reported plans to publish “the first Ukrainian-language newspaper in Crimea”.  ‘First’ it is not, but it will be the only paper in Ukrainian since Russia’s invasion and occupation of Crimea.  It may be used merely for propaganda purposes, however the ‘Ukrainian society’ supposedly behind the initiative was formed by the occupation government and has an openly anti-Kyiv position.

Zaur Smirnov, an official in the de facto Crimean government, announced on Feb 4 that the first issue of the newspaper would come out this month, with it probably being monthly at the beginning.  The publication, he said,  would be financed by the Crimean government and would “of course” not cover any political news, but would talk about the culture, the history of Ukrainians in Crimea and the activities of the Ukrainian community of Crimea.

Although Smirnov suggests that the paper will write about the Ukrainian community in general, it becomes clear that agreement on its publication is with a particular group called the “Ukrainian community of Crimea” which is quite a different matter.

The position of the organization in question can be easily gauged from their Facebook page, and from one of the articles they felt the need to repost.  This is entitled “Crimea calls on the West to subdue Kyiv in its attempts to unleash conflict on the border”.

It is probably the involvement of this organization that prompted a Crimean journalist to refer to the planned publication as being “an anti-Ukrainian newspaper in Ukrainian”.  The author, who, to avoid Russian FSB persecution, writes under the pseudonym Sergei Stelmakh, believes that “such initiatives are aimed at pushing false stereotypes among Crimean residents and providing an information front for further repression against Ukrainian activists”.

He says that the ‘Ukrainian Community of Crimea’ was founded last year, basically by the de facto government, with the aim of pushing an image of Ukrainians (as some kind of ‘younger brother)’ that suits Moscow.  Its leader – Oleh Usik – is an active member of the ruling United Russia party and, according to Stelmakh, spreads anti-Ukrainian messages on social networks.

The organization was hardly visible in the media, Stelmakh says, and assumes that it is needed now in order to produce an anti-Ukrainian newspaper in the language of Taras Shevchenko and Ivan Franko.  This is typical practice among occupation regimes.  The Nazis, for example, published propaganda and newspaper in Russian and in the national languages of the Soviet territory they had seized.

Stelmakh believes that the new move may have been influenced by the elections in the USA and points to other events, such as the recent article by billionaire Victor Pinchuk in which he proposed that Ukraine should give up on Crimea as part of Ukraine.

Stelmakh mentions only Pinchuk, but in fact such ideas have been pushed in suspicious unison by others as well, including Henry Kissinger and a number of people close to US President Donald Trump.

Whatever the will may be for dropping sanctions and establishing good relations with the Kremlin at Ukraine’s expense, Russia as occupying power will have to try much harder than one cosmetic – and state-funded – newspaper.

Russia’s attempt to claim before its invasion that Ukraine was aggressively forcing the Ukrainian language clashed dramatically with the truth.

There was always only one Ukrainian language newspaper – Krymska Svitlitsa – and a supplement to Krymskiye izvestia.  Krysmka Svitlitsa was essentially forced out of Crimea in 2015, and is now publishing from mainland Ukraine.

The fate of Crimean Tatar media was similar, with the only Crimean Tatar TV channel in the world, and many other media forcibly driven from Crimea in April 2015.

The offensive has not been against only the media.  One Ukrainian – Volodymyr Balukh -  is in detention now, with the concocted charges almost certainly arising from his pro-Ukrainian position and refusal to remove a Ukrainian flag from his house.  In Simferopol members of the Ukrainian Cultural Centre have regularly been harassed.  In January this year FSB officers turned up at the home of Andriy Vinohradov and Natalya Kharchenko in Simferopol.  They carried out a search, taking all working computer technology, etc. away.  Khachenko is now facing possible criminal proceedings under Russia’s notorious ‘extremism’ legislation over a photo of her in camouflage gear with a Ukrainian flag, against Crimean landscapes.

If the charges are formally laid, Kharchenko will be the latest in an increasing number of Crimeans facing ‘extremism’ charges for an openly pro-Ukrainian position.

The most flagrantly cynical charges are those laid against Crimean Tatar leader Ilmi Umerov and journalist Mykola Semena.  Both men are charged with ‘public calls to action aimed at violating Russia’s territorial integrity for an interview in Umerov’s case and article in Semena’s where the men expressed the view that Russia must stop occupying Crimea.  This could carry a five-year prison sentence.

As well as criminal charges, the occupation regime often uses administrative proceedings, quite literally, for photos with a Ukrainian flag.

Four Ukrainians also received 20- or 40-hour community work sentences for a Ukrainian flag or Ukrainian ribbons at a peaceful gathering to honour the poet Taras Shevchenko on March 9, 2015. Leonid Kuzmin, who now heads the Ukrainian Cultural Centre, was almost dismissed from his job as history teacher and is now forced to work as a dental assistant – another disturbing echo of Soviet treatment of dissidents.