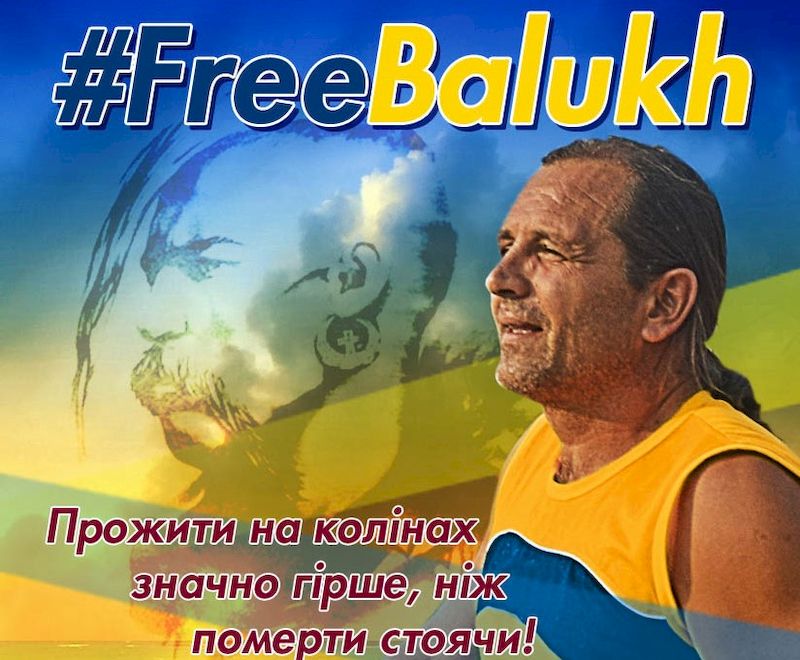 A Crimean for whom the words of Ukraine’s national anthem about “laying down life and soul for our freedom” are his credo in life has become the latest political prisoner in Russian-occupied Crimea.  The renowned Memorial Human Rights Centre’s statement declaring Volodymyr Balukh a political prisoner and demanding his release came as the Ukrainian farmer spent his 45th birthday jailed on overtly absurd charges.  The Crimean Human Rights Group has also launched a campaign in support of “a strong and courageous man, a Ukrainian who continued flying the Ukrainian flag, despite persecution and who openly states to everybody that Crimea is part of Ukraine.

Memorial HRC has given a blistering  assessment of the charges against Balukh who was arrested on Dec 8, 2016 and charged with illegal possession of ammunition.

The FSB carried out an “inspection” of the home Balukh shares with his common-law wife.  They allegedly found 89 “military” bullets from a 5.45+39 calibre gun, with 19 being fit for shooting in his attic.  Balukh had faced harassment from the FSB from the beginning over his pro-Ukrainian position, and many searches, making it inconceivable that he would have obligingly left ammunition around for the entirely predictable next visitation.  There are no fingerprints at all on the bullets, which were allegedly ‘found’ in Balukh’s absence and with only one official witness brought.  As if this were not sufficient grounds to suspect that they were planted, Balukh had been threatened with precisely such a course of events just over a week earlier.

On Nov 29, Balukh had nailed a plaque to his home, calling it No. 18 “Heroes of Nebesna Sotnya St.  Nebesna Sotnya [Heavenly Hundred] refers to over 100 victims of the Revolution of Dignity or Euromaidan, which Balukh had supported from the beginning.  The head of the local council turned up and demanded that he remove it, threatening that the plaque could have bad consequences, including the ‘discovery’ in Balukh’s possession of weapons or drugs.

Memorial HRC notes also that the court order from the deputy head of the Crimean Supreme Court Viktor Sklyarov had been issued more than a month before the search.

Even if the charges were reasonable, there would still be no grounds for remanding him in custody, yet he remains in detention.

As reported earlier, a court on Feb 3, 2017 extended this detention, ignoring not only the lack of grounds, but also Balukh’s deteriorating health and considerable evidence that he had been subjected to torture

The Crimean Human Rights Group believes that the FSB are simply intent on keeping Balukh imprisoned.

The Ukrainian’s problems with the FSB began on April 30, 2015.  Two men, one from the FSB, appeared while he was helping his mother and demanded he go with them.  He demanded a warrant, and having ascertained that the men had also turned up at his home and carried out a search, he stayed with a friend for two weeks.  The FSB used the time to harass his mother, carry out searches of both homes and rip down the Ukrainian flag.

The Crimean Human Rights Group issued their own statement on Balukh’s birthday, saying that Volodymyr Balukh has been battling every day with an illegal regime in Crimea, and is now paying the price of his own liberty. “The support of Ukrainian society is extremely important for him, as for all Crimean political prisoners who have become hostages of the Kremlin”.

PLEASE write a letter or just words of support to Volodymyr, and send them to [email protected] who will pass them on.

If you send a letter, please make it in Russian, since any letters printed out would have to be in Russian to be passed to him.  Very brief messages of support could be in Ukrainian or English.