French Collaborators Kiss Monument to Russian Invaders of CrimeaNo surprises as Trump says he could recognize Crimea as ’Russian’ & lift sanctionsA British Foreign Secretary who excuses Russia’s invasion of Crimea?Kremlin’s Donbas proxies congratulate UK for ’doing what they did’ & voting for BrexitBrexit a gift to Putin, the far right & Trump, a blow to democracyEx-Mayor of London Boris Johnson blames Russia’s annexation of Crimea on the EUWhat European Values if Dutch Referendum Result Stands?Appeal by the leaders of Ukrainian national communities to the Dutch populationFormer Soviet political prisoners call on Holland to say yes to Ukraine’s European futurePlaying with fear and ignoranceHow a democratic tool became a threat to democracyUkrainian Jewish leaders appeal to Holland: Give our country the chance to break with the pastDutch referendum puts Ukraine in spotlightChildren to undergo compulsory military training in both Russia and occupied Crimea Imprisoned Crimean artist faces ‘terrorism’ charges for protesting Russia"s war against UkraineRussians threatened to kill abducted Crimean Tatar’s family if he didn’t sign fake ‘confession’ Russia demolishes Mariupol Drama Theatre to try to blame Ukraine for its most heinous war crime Russia sentences young Ukrainian to 12 years on surreal charge of ‘state treason’ Russian MP promises a child from Kyiv missiles as a "New Year present"Russian propaganda media and ex-President guilty of direct incitement to genocide in Ukraine, report finds
• Topics / Politics and human rights
• Topics / Human Rights Abuses in Russian-occupied Crimea 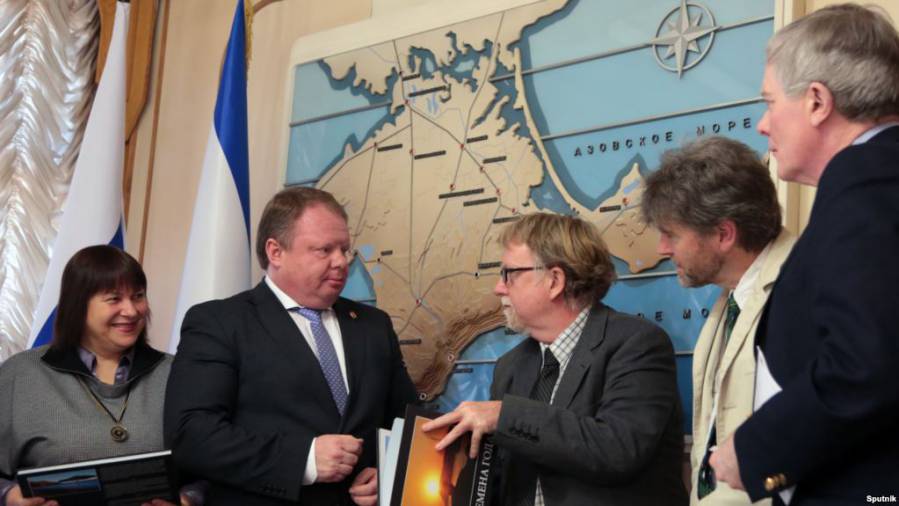 Three UK academics specializing in military history are currently taking part in meetings and propaganda media shots in Russian-occupied Crimea.  They appear to be promising a joint project with Bristol University which says that the men have nothing to do with them.  The origin of the misleading information is unclear, however the members of this pseudo-delegation cannot have been unaware of the maximum propaganda benefit Russia would seek to obtain from the visit.

The Russian state-funded media assert that the men are from Bristol University and the Military History Monthly.  RIA Novosti identifies Patrick Mercer as “a military historian from Bristol University’  who is reported as saying that the academics are interested in carrying out excavations linked with the Crimean War and in developing ‘archaeological tourism’.  They hope this will attract huge international interest and “attract foreign and Russian tourists”.

This is, of course, exactly what their Russian hosts expect of the visitors. Mercer is effectively recognizing the Ukrainian peninsula invaded by Russia and illegally annexed in 2014 as ‘Russian’, and promising to try to get others to also ignore international sanctions by doing the same.

Neil Faulkner, whom RIA Novosti simply describes as Mercer’s colleague, “stated that Bristol University is willing to become the academic partner of this project”.

The university’s press officer is currently looking into ways of getting this misleading information removed.  Faulkner, an archaeologist by profession, was a research fellow at Bristol only until 2011, and now has no position in the university at all.  Neither do the other two men – Mercer and Roger Ward.

Faulkner is currently the editor of the Military History Monthly, which Mercer occasionally writes articles for.  Aside from confirming this information, a journal representative has yet to comment on the visit.  Judging by open source information, Faulkner is a Marxist and former member of the Trotskyite Socialist Workers’ Party, and has recently become an active supporter of the Labour leader Jeremy Corbyn, whose attitude to Russia’s invasion of Crimea and lack of concern for human rights abuse since annexation have been baffling.

Faulkner’s other activities, and Mercer’s entirely low profile, were presumably not seen as important enough and most of the Russian reports lay particular emphasis on the supposed links with Bristol University.   The latter should certainly ascertain whether the men were misreported or deliberately provided misleading information.

Collaboration between any UK university and the de facto authorities in Russian-occupied Crimea would be in breach of Ukrainian law since all visits would bypass Ukrainian border control.  It would also breach international sanctions and the UN Resolution of March 27, 2014 asking all countries to refrain from any behaviour which could be seen as recognizing Russia’s occupation of Crimea.

The British visitors are in strange company.  Most of such ‘delegations’ have been from far-right parties, with some of the members often having earlier obliged by praising the pseudo-referendum Russia organized in 10 days to rubber-stamp it’s annexation.

Perhaps the most shameful part of any such visits is that the participants inevitably take part in propaganda stunts aimed at normalizing Russia’s occupation of Crimea and its serious human rights violations.  In July 2016, a group of French politicians, mostly from Nicolas Sarkozy’s Republican Party, actively denied the mounting political persecution and said nothing when the de facto prosecutor Natalya Poklonskaya came out with flagrant lies about Crimean Tatar activist Ervin Ibragimov and other victims of abductions and forced disappearances under Russian occupation.