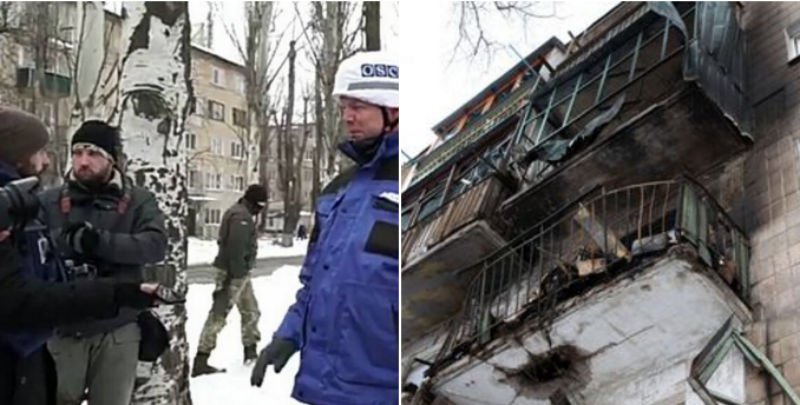 The problem with fighting fake news from Russia is that it often comes from top officials in Moscow like Sergei Lavrov, Russian foreign minister.  Lavrov’s latest distortion of the facts came in an interview given to Izvestia on Feb 10, and was refuted that same day, though that, of course, was ignored by the Russian media which repeated his lie.

Lavrov claimed that it was “the radical and nationalist forces in Kyiv” who bear responsibility for the new escalation in fighting and that this “is documented in the reports of the OSCE Special Monitoring Mission”.   He spoke only of shelling by the Ukrainian Army, with civilian deaths, destruction and the fact that many people were left without water, electricity and heating effectively attributed to the Ukrainian side.

Lavrov was speaking to a strongly pro-Kremlin newspaper and presenting the line that has been taken by all Russian government-controlled media, quoting only the Kremlin-backed militants.

There is effectively no likelihood of the vast majority of Russians’ understanding that this is pure fabrication, although Alexander Hug, First Deputy Chief Monitor of the Mission, had rejected the assertion within hours of it being reported.

Hug stated clearly that the Mission simply monitors the situation and violations of the agreement, without attributing blame to any party.  It is for the readers of the reports produced to draw their conclusions.

Hug’s press briefing made it abundantly clear why Lavrov’s ‘conclusions’ bore little if any relation to his reading.

There had indeed been the worst escalation since the beginning of 2016, with Hug reporting that the number of ceasefire violations had almost tripled.  There had been a six-fold increase in the number of explosions caused by Minsk-proscribed weapons, with 30% of these from multiple launch rocket systems.

The monitors, he stressed, had seen proscribed weapons in the security zone on both sides and said that when the weapons are available, they are used.

Russia and the Russian/pro-Russian fighters in Donbas are, in fact, virtually alone in attributing the blame for the escalation in fighting to Kyiv.  This is hardly surprising since the main target of shelling was Avdiivka, a city under Ukrainian government control.

Daniel Baer, until Jan 20 US Ambassador to the OSCE called the surge in fighting “only the latest instance of a pattern that has gone on for many months: we have seen Russia using fighting in Eastern Ukraine to try to pressure Kyiv. What was interesting about this time is that the Russian delegation actually warned of possible escalation on January 26 in Vienna at the OSCE Permanent Council – and then we saw the surge in the following days.”  “I understand Mr. Hug’s call for both sides to abstain from fighting.  But from a foreign policy perspective we can’t forget the big picture – there’s a victim and an aggressor here, and Ukraine is the victim and Russia the aggressor.”

It was not only that timing that made most western analysts and media assume that Moscow had orchestrated the offensive against Avdiivka.  The shelling began the day after the first telephone conversation between Putin and Trump, and almost stopped just as suddenly.

None of this is presented in the Russian media.  The public in Russia, as well as those on occupied Ukrainian territory in Donbas and Crimea, hear only Lavrov’s alternative facts.  Meanwhile, there are reports that public sector workers in the so-called ‘Donetsk people’s republic’ are being forced, on threat of dismissal if they refuse, to sign an ‘appeal’ to Russian President Vladimir Putin, US President Donald Trump and Germany’s Chancellor Angela Merkel to stop the ‘genocide’ by the Ukrainian army.

Although it was mainly the shelling that most chillingly recalled the worst months of the war in 2014, the warmongering propaganda was also drearily familiar.  Here too Lavrov played his part.  In June 2014, he publicly claimed that Ukraine had used phosphorous bombs, using footage which the Defence Ministry-linked TV Zvezda lifted from footage about the bombing of Fallujah (Iraq) in 2004.   That was just one of many such fakes used on Russian television to claim Ukrainian atrocities.