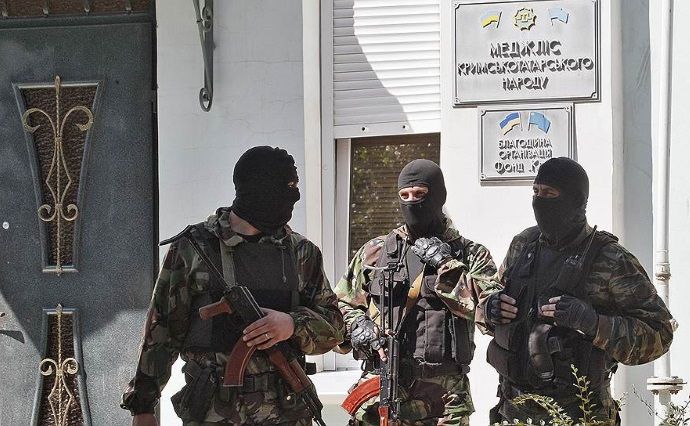 Ukraine is taking Russia to the European Court of Human Rights over its ban of the Mejlis or representative assembly of the Crimean Tatar People.  Russia’s criminalization of the self-governing body of the main indigenous people of Crimea has been described as “a hostile act against the Crimean Tatars” and as a new low for Russia.  The Mejlis has clearly been declared ‘extremist’ because of its opposition to Russian occupation, so it seems inconceivable that the Court in Strasbourg will not find Russia in grave violation of the European Convention.  The problem is chiefly the time taken to consider such cases, during which still more members of the Mejlis are likely to face imprisonment or other forms of repression.

Pavlo Petrenko, Ukraine’s Justice Minister announced on Feb 9 that the application was being agreed with the Mejlis before being formally lodged.  It will be the sixth inter-state suit brought by Ukraine against Russia over the latter’s invasion and annexation of Crimea and its military aggression in Donbas.

Although the formal ruling banning the Mejlis was on April 26, 2016, with this upheld by the Russian Supreme Court on Sept. 29, repressive measures began shortly after Russia’s invasion and annexation of Crimea.  The Mejlis had called on all Crimean Tatars and other Ukrainians to boycott the pseudo-referendum with which Russia attempted to give legitimacy to its land-grab.  Veteran Crimean Tatar leader and former Mejlis leader Mustafa Dzhemiliev was banned from his homeland in April 2014, with a ban on the current Mejlis Head Refat Chubarov following in July that same year.

The offensive against the Mejlis itself intensified in September 2014, after the Mejlis again called for a boycott of equally fraudulent ‘elections’.  Then in January 2015, Akhtem Chiygoz, the Mejlis’ Deputy Head was arrested and remains imprisoned on surreal and thoroughly lawless charges.  Another Mejlis leader Ilmi Umerov is also facing a 5-year jail sentence, quite literally for saying that Russia should be made to leave Crimea.

The banning of the Mejlis as ‘extremist’ came in stages, probably to see how much condemnation there was abroad.  There was never more than ‘deep concern’ and  Russia moved from threats to specific action, with a ‘court application’ first lodged in February, 2016. The ban was then made a fait accompli on April 13 when the de facto prosecutor Natalya Poklonskaya announced that she was ‘suspending’ the Mejlis without a court ruling.  Russia’s justice ministry then also saw no need to await a court ruling and on April 18 added the Crimean Tatar Mejlis to its list of “civic or religious organizations whose activities have been suspended due to their extremist activities.”  The ban, as mentioned, was then rubber-stamped on April 26. Since it was immediately appealed, it has only been in force since the Supreme Court ruling on Sept 29.

Thus far the occupation regime has confined itself to administrative proceedings over a Mejlis meeting, however prominent Crimean Tatar lawyer Emil Kurbedinov believes it is only a matter of time before a new offensive.

Just as Russia has persistently denied its invasion and its occupation of Crimea, it has equally implausibly tried to rewrite the facts regarding its extraordinary banning of a self-governing body, which the European Parliament, in a recent resolution. called “the legitimate representation of the Crimean Tatar community”.   The European Parliament’s recognition of the Crimean Tatars as an indigenous people of Crimea whose right to self-government is protected under the UN Declaration on Rights of Indigenous Peoples basically echoes the position taken by all democratic countries.

Russia, however, has tried to treat the Mejlis as a ‘civic organization’ which can be banned as ‘extremism’.  The attempt itself is absurd, but so too was the  ‘evidence’ provided at the court hearings.  These included: a document published by Mustafa Dzhemiliev back in Soviet times (1988); the Mejlis’ founding documents from two decades before Russia’s annexation.  Their supposed ‘extremism’ lay in the aim declared as being the reinstatement of the Crimean Tatar people’s national and political rights as part of Ukraine.  The other material presented included the notification of criminal proceedings lodged against Mustafa Dzhemiliev for having tried to enter his homeland; and against Refat Chubarov, for “encroaching upon Russia’s territory”, that is, opposing Russia’s occupation of his native Crimea.  The legally nihilistic charges against Akhtem Chiygoz regarding a pre-annexation demonstration on Feb 26, 2014, over which Russia has no jurisdiction were also put forward.

‘Arguments’ of this nature were simply accepted by the Supreme Court which clearly understood its task as being to complete the completely illegal criminalization of the democratically elected and internationally recognized self-governing assembly of the Crimean Tatar people.