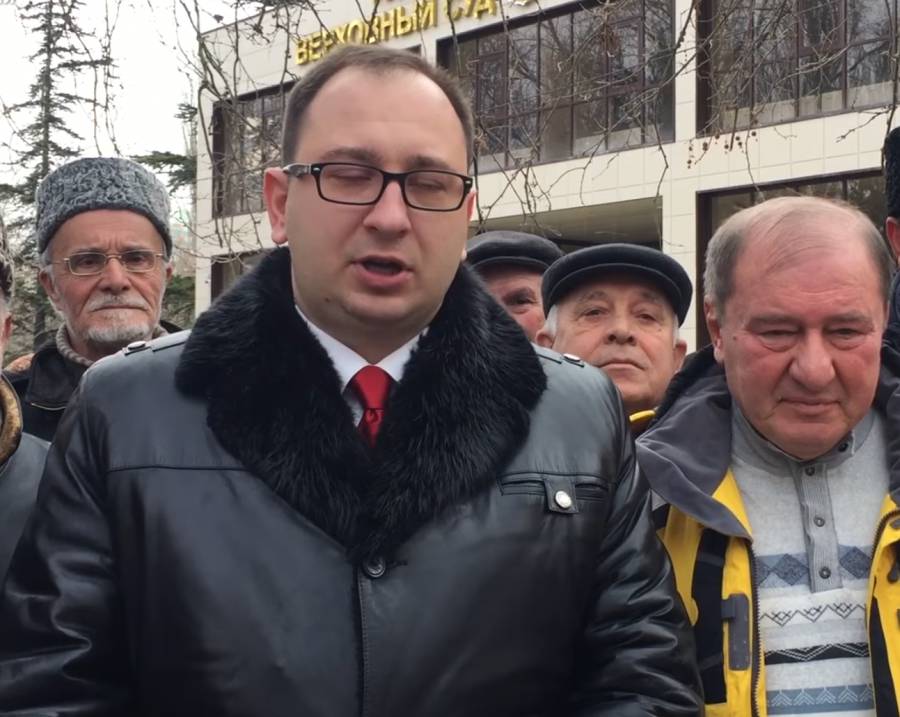 In a move as predictable, as it is lawless, Crimean Tatar leader Ilmi Umerov has been deprived of his defence lawyer Nikolai Polozov.  The Crimean Supreme Court under Russian occupation rejected Polozov’s appeal against a ruling allowing Polozov to be interrogated as a ‘witness’ in Umerov’s case.  Any connection Polozov has with Umerov is linked with his professional role as defence lawyer and the ‘witness status’ is needed for one purpose alone, namely to prevent him from defending his client.  This has now been achieved in a way that Umerov confirms the total lawlessness of the country which has come to his land.

The FSB  since September 2016 to use the ploy of questioning Polozov as a witness to remove him from the case.  The questioning is over the circumstances of his legal counsel to Umerov which is secret information between a lawyer and his client, making the interrogation illegal.  This was recognized by Judge Denis Didenko who back in September rejected the first attempt to get a court order forcing the interrogation.

Judicial independence is not allowed in Russian-occupied Crimea, and the subservient Supreme Court overturned Didenko’s ruling and sent the application from Igor Skripka, investigator in Umerov’s prosecution, for Polozov to be forced to undergo such interrogation for new ‘consideration’.

The next ‘court hearing’  on Dec 13 behind closed doors and without either Polozov or his lawyer, Oksana Zheleznyak present.  Viktor Mozhelyansky has gained notoriety for his willingness to pass dubious rulings, and this one was no exception.

Mozhelaynsky’s ruling was immediately challenged, and it was this that was rejected on Feb 14 by judge Yury Latynin .  The court hearing was such a formality that Skripka chose to ignore the fact that without it, the court ruling allowing Polozov’s interrogation had not come into force.  On Jan 25, Polozov was seized and held for several hours.  This FSB move constituted an abduction and was totally illegal, as was the effective refusal to let Polozov’s lawyer, Edem Semedlyaev be present.

Polozov was taken to Skripka and another man with a video recorder, clearly there to the moment at which Polozov was made into a ‘witness’.

It should be stressed that this is an offensive against all lawyers defending victims of repression in Russian-occupied Crimea.  Polozov has pointed out that the strategy now developed can be used to strip them of any defence since judges will be found who obediently order that any lawyer be turned into ‘a witness’.

Other, even more openly repressive, measures are also applied.  The day after Polozov’s effective abduction, renowned Crimean Tatar lawyer Emil Kurbedinov was arrested after armed searches of his home and of his and Semedlyaev’s law office.  Computers with confidential material about other cases were taken away and have still not been returned (details here).

He was jailed for 10 days on surreal charges linked with a repost on the VKontakte social network of a demonstration back in June 2013, almost a year before Russia’s invasion and annexation.  The demonstration was linked to Hizb ut-Tahrir, a totally peaceful organization which Russia calls ‘terrorist’, but which was in 2013 and remains legal in Ukraine and most countries.

Kurbedinov had earlier noted that the FSB particularly hate publicity and that it was this that has made him “enemy No. 1’.

Polozov will be challenging this ploy to get him and other lawyers removed from cases in Russia and says he may lodge a submission to the Constitutional Court.  The way is now also open for an application to the European Court of Human Rights.

All of this, however, takes time and there is an ever-increasing number of politically-motivated prosecutions in Russian-occupied Crimea, with the majority of defendants held in detention. Kurbedinov, Semedlyaev and Russian lawyer Polozov have played an invaluable role in highlighting the gross violations in the prosecutions of their clients and the lack of any grounds for the charges.

International attention is vital to prevent Russia from silencing them.

59-year-old Ilmi Umerov was initially detained on May 12 and charged in connection with an interview given (in Crimean Tatar} to TV ATR  on March 19, 2016 in Kyiv.  In that interview he stated that Russia must be made to leave Crimea and Donbas, as do the UN General Assembly, the EU, the Parliamentary Assembly of the Council of Europe and most countries.  Russia has, quite incredibly, claimed that the interview contained “public calls to action aimed at violating Russia’s territorial integrity’. This is under Article 280.1, a new article introduced within months of Russia’s invasion and annexation of Crimea, carrying a mandatory 5-year term of imprisonment..

He was recently also interrogated over  (in Russian) which he gave to a Kyiv TV channel (17 Kanal) on Dec 12, 2015.  Umerov states that Crimea’s return to Ukraine cannot be achieved by military means since the peninsula is now so heavily militarized.  By now, he says, the amount of military equipment and weapons in Crimea has risen exponentially.  He believes that increased sanctions together with the falling price of oil and Russia’s mounting isolation will turn Crimea into an insurmountable burden for Russia.  He calls on Ukrainians to not give up on Crimea which is a part of Ukraine and worth struggling for.

More details about the main charges and other repressive measures against Umerov can be found here: Punitive Psychiatry against Crimean Tatar leader for insisting Russia must leave Crimea