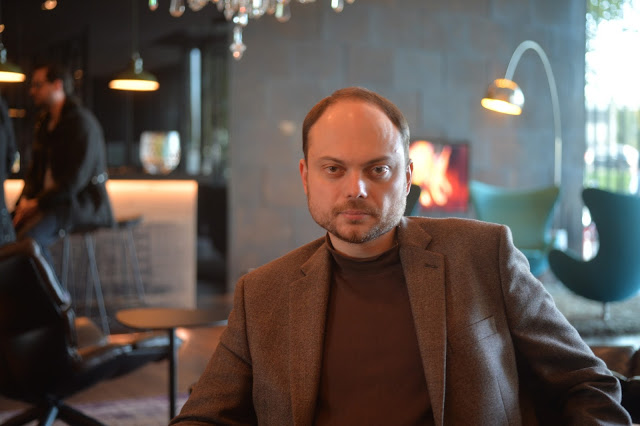 Russian opposition activist Vladimir Kara-Murza, 35, was a guest at a congress of the Dutch political party D66 at the end of October last year, where he gave a speech titled “25 Years of Russian Opposition and the Future of Opposition”. This interview took place during his visit, but was not published previously due to a technical problem with the recording.

Kara-Murza was poisoned with an unknown substance at the end of May 2015 – three months after the murder of his friend Boris Nemtsov - and on February 2, 2017 he was taken to intensive care with similar symptoms. He took ill on the train from Tver back to Moscow. In Tver he had been at one of several events in different cities where he showed a new documentary about Nemtsov. According to the doctors Vladimir’s clinical situation is identical to the situation in 2015.

You were poisoned in 2015, can you tell us what you know about this?

I do not know how and when exactly I was poisoned. I am sure of one thing, this was a response to my political activities in Russian opposition. This was particularly done because of my role in the campaign to get the Magnitsky law passed in the U.S. The Magnitsky law introduces personal individual targeted sanctions on Kremlin Russian officials involved in human rights abuse and corruption. I am also involved in a campaign to have similar measures taken in the EU, I will be speaking here in Holland about that, at the D66 congress. After I was poisoned in 2015 I spent two months in intensive care in Russia. After that I spent four months in the United States for rehabilitation. I went back to Russia in December 2015.

All I know is that it was a very sophisticated poisonous substance. Presumably a binary poison, this is a toxin with two different components that interact. This type of poison almost leaves no trace, it is virtually impossible to tell what it is, but it started shutting off my organs like my lungs, heart and liver. I was on eight different life support systems, doctors told my wife at that time I had a five percent chance of surviving, I am very happy and fortunate to be here today. My best friend Boris Nemtsov was not so lucky, he was killed next to the Kremlin because of his political opposition activities. Boris was my closest friend and godfather to one of my children, that practically makes him family.

Is it possible that your opponents could try a second attempt to kill you?

It is very difficult for me to feel safe in Russia, especially after I was poisoned. When I woke up from the coma after having been poisoned there was no doubt in my mind that I had to go back. I had to go back and continue my work. There are many people who reject the current regime, people who do not accept corruption, aggression and isolation from the rest of Europe and the outside world. We, the leaders of the democratic opposition, have the responsibility to work in the right direction. There is nothing that the current regime would like better than us to give up and run away. We are not going to give them that! But my wife and daughter are outside of Russia, that is the precaution I took. I went back to Russia the moment that I could fly out again. I have not rehabilitated completely but at least I do not need a cane to walk any more.

Did you go to the authorities after you were poisoned?

As soon as I returned to Russia I went with my lawyer to the investigative committee. I put in an official request for a criminal investigation under the article 105 of the Russian Criminal Code. Article 105 is attempted murder on the basis of political hatred. I handed over all my medical files. That was in December 2015, officially authorities had 30 days to open a criminal case. I have not heard anything since. I knew nothing would be done but my friends and lawyers convinced we have to abide by the law even if they don’t. What can I do if someone wants to kill me? I can request an official investigation, which is exactly what I did.

Can you tell us about your work for the pro-democracy Open Russia.

I am the coordinator of Open Russia, the pro-democracy organisation that was founded by Mikhail Khodorkovsky, who is currently in exile. This is my main work and this is what I am now doing. I am also the deputy of the people’s freedom party founded by Boris Nemtsov. The Freedom Party is a member of the Alliance of Liberals and Democrats for Europe Party (ALDE Party) which is composed of 60 national-level liberal parties from across Europe. The Dutch political party D66 is our sister party, D66 invited me for their congress in Holland and this is the reason why I am in Holland now. The Democratic Russian political party Yabloko is also a member of ALDE.

Do you stand a chance politically in the current system?

There is currently no opportunity to change the regime by elections, I am stating the obvious here. It is our task for the democratic opposition to help prepare the young democratic opposition across the country. We need to prepare the drafts of reforms, the basis for a democratic system. If we wait for the regime change then we will be too late. Back in August 1991 things happened so suddenly that politicians were too late with their actions, so many mistakes were made at that time. We cannot make the same mistake. We are preparing for the moment of democratic transition, this may sound fantastic but I am convinced that it will happen. We still took part in the elections in September 2016 but just to show people that there really is an alternative. There is a vision for a different Russia, a democratic Russia. We put up 20 candidates throughout the country. The last time that Russia had free and fair national elections was in March 2000. This is not me saying this, it was the official assessment by observers of the OSCE and the Council of Europe. For 16 years we have not had a free and fair election. When I talk about elections I always say “elections” between quotation marks.

Political change will not come as a result of elections, Putin wants to stay on, but that doesn’t mean he will. Luckily it doesn’t always depend on the will of dictators, I think Yanukovych also didn’t want to flee Ukraine. Change will come unexpectedly and very sudden, when no one will least expect it. The protests on Bolotnaya Square are a good example, if anyone had told me a month before that the protests were going to be so massive I would not have believed them.

What can you say about the propaganda about Ukrainians being fascists and the regime change in Ukraine?

Almost nobody believes that Ukrainians are fascists, this is propaganda. There are some people who believe the Putin propaganda. Ukrainians wanted a democratic country and were fed up with the widespread corruption. I am a historian by education and every single time Russian people had a choice in free elections between a democratic leader they chose the democratic option. For example in 1906 the first Russian State Duma was won by the liberals. The supporters of autocracy did not win a single seat at that time. In 1917 after the Bolshevik coup, the Bolsheviks lost. The candidate of the ruling Communist Party only got 17 percent of the votes. It’s a myth created by the Kremlin that Russian people want a strong leader, we are no worse or better than European people about this.

What can you tell about the popularity of Putin according to polls of for instance the Levada Centre?

It is not even a question of trust, in an authoritarian system polls are meaningless. If a person gets a phone call or a knock on the door and someone asks you do you support Putin?, what is someone going to say? No one dares to say that he does not support Putin with what is currently going on in the country. I do think people were proud when Crimea was annexed, that certainly helped Putin’s image. In fact I believe fact this was exactly why Crimea was annexed. Before there were mass protests, the annexation did boost the image of the regime. This should not be overstated though, at the height of this hysteria in 2014 we held a Nemtsov memorial march, this was at the height of the Crimea hysteria. So many people showed up, 18,000 people took part in this march. People were not afraid to come out and march in the middle of Moscow, this is the real face of Russia. The current government is now doing everything to eradicate the memory of Boris Nemtsov, they refused to put a memorial plaque on the bridge. The Kremlin spokesman even went so far as to say that Boris Nemtsov is just an average citizen. But there are always people on the bridge putting flowers and pictures on the bridge. Police arrest these people but the next day new flowers and pictures are put there again.

In the West people sometimes wonder why we don’t see a lot of protests, what can you say about this?

It is virtually impossible to protest nowadays. Ildar Dadin was sentenced for three years in prison just for protesting on his own on the street. But it is much worse, people there are people who went to prison for just one like on social media, we also see politically motivated court orders, harassments, attacks, attempts on people’s lives like what happened with me or worse, like the assassination of Boris Nemtsov. It is dangerous to be in opposition nowadays but there is no alternative than to carry on. A lot of people are not happy with the current regime. I travel all over the country and everywhere there are people who want change. Just see what will happen, I guarantee that you and I will be surprised in time!