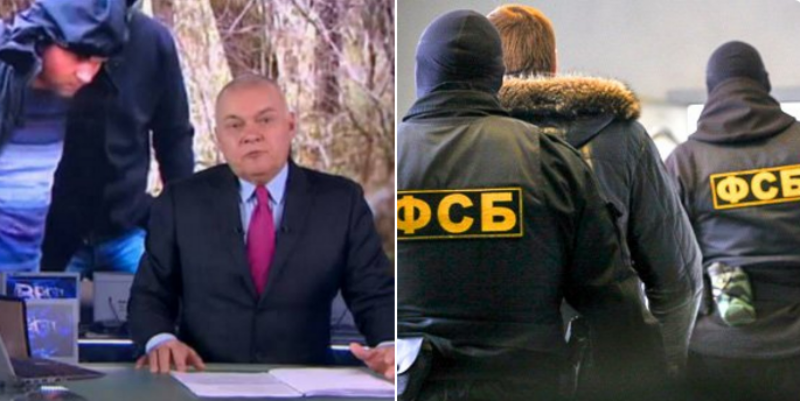 In addressing his “dear comrades” in Russia’s FSB or security service, Russian President Vladimir Putin claimed that Ukraine was not only seeking a military end to the conflict, but was also  “openly speaking of organizing sabotage and terrorist activities, subversion, including in Russia”.  Evidence was not provided, and such assertions have only ever been backed by an ever-increasing number of arrests.  Putin knows he can rely on his ‘comrades’ to come up with ‘confessions’ to such sabotage and terrorism, with Russian courts then rubberstamping the sentences demanded.   As problems linked with Russia’s invasion and annexation of Crimea mount, it is doubtless useful to distract the population by inventing terrorist threats that the FSB is allegedly thwarting.

Russia was quite undaunted by the international scepticism over its claims in August that Ukraine’s military had attempted ‘incursions’ on Ukrainian Crimea.  Why worry about the lack of any proof, if you can seize people and torture them into ‘confessing’ on state television?  This was the scenario applied against Ukrainian filmmaker Oleg Sentsov, civic activist Oleksandr Kolchenko and two other opponents of Russian occupation in 2014.  Despite international condemnation, Putin continues to repeat ludicrous claims that Sentsov was sentenced to 20 years for ‘terrorism’.  The FSB then repeated the same format in August 2016 with its arrests of Yevhen Panov, Andriy Zakhtei, Redvan Suleimanov and Volodymyr Prysich.

Not everything has gone to plan.  FSB attempts to prevent Panov and Zakhtei seeing lawyers were finally thwarted by the European Court of Human Rights and both men have retracted confessions and described the torture applied to extract them. Panov’s family in mainland Ukraine have no intention of remaining silent and his case is at least known.

The other victims have been less fortunate, yet each is being held in appalling conditions and faces long sentences on fabricated charges.

There was nothing to explain the new wave of arrests in November 2016, nor the choice of people.  They are all so implausible as supposed ‘saboteurs’ that it seems likely that the FSB used their illegal access to Ukrainian databases of people who had once had dealings with the Black Sea Fleet and randomly took pick.

On Nov 9, two well-known academics - Dmytro Shtyblikov and Oleksiy Bessarabov - were arrested in Sevastopol together with a retired Ukrainian military officer Volodymyr Dudka.  The FSB claimed that they were “members of a sabotage – terrorist group of the Ukrainian Defence Ministry’s Central Intelligence Department” who were planning acts of sabotage on military and other infrastructure”.

Two much younger Crimeans  - Oleksiy Stohniy and Hlib Shabliy were arrested 10 days later, with this followed on Nov 24 by the arrest of Leonid Parkhomenko, a long-retired Black Sea Fleet captain.

In all cases, the only material has come from televised videos of ‘confessions’ and highly manipulative ‘news reports’.  The videos are supposedly from the FSB, but breach all principles of criminal procedure.  None of the men had access to lawyers of their choice at the time, and at very least Shtyblikov has since been prevented from seeing the lawyer his family chose.  The claim is that he himself rejected the lawyer and chose another, but there is no evidence to support this, and it seems likely that the FSB have forced him to accept their lawyer, as they tried to do with Panov and Zakhtei.

Of the five men arrested in November, only one has since been allowed to see the lawyers chosen by his family.  It is telling that Volodymyr Dudka also ‘confessed’ until he was finally allowed to see a lawyer.  He has since retracted the ‘confession’ and said that it was extracted through duress and threats to his family.  He denies all charges.

The 52-year-old former military sea captain is originally from Sumy, but was sent to Crimea in 1988 after graduating, where he remained, working for the Ukrainian Fleet.   He retired for health reasons in 2009, but continued to work for the Ukrainian Emergency Services, using his professional skills to locate unexploded mines from WWII.  He continued doing this work for the analogous Russian agency after annexation.  He himself had no access to explosives.  His task was merely to locate the mines, after which a special team was sent in.

Dudka remained in Crimea after 2014 because of his son.  A year ago, his much longed-for granddaughter Polina was born and he spent virtually every weekend with them. It is this that makes the charges so surreal.  A man whose life totally revolves around his son and granddaughter is supposed to have been engaged in a sabotage plot aimed at destroying vital infrastructure which provides them with electricity, etc.

Dudka suffers from a cardiac condition and ulcer and his state of health is deteriorated in the cold and draughty cell he is being held in.  It is particularly disturbing that medicines he urgently needs are not being passed to him.

It is likely that the others are being treated in a similar fashion, with even less chance of being heard.

There is nothing to indicate why two renowned academics - Dmytro Shtyblikov and Oleksiy Bessarabov should have been targeted, yet impossible to take the charges seriously.  The video footage of Shtyblikov’s arrest and the search of his home could only have satisfied the most zombified of television viewers.  The supposed ‘arsenal’ of weapons found in his home were airsoft weapons for a sports hobby.  A ‘business card’ purportedly of the former head of the right wing ‘Right Sector’ organisation has now been flaunted as ‘incriminating evidence’ on at least two national television news reports.  This is the same business card that was the subject of hilarity two years earlier when it was first ‘found’ intact and looking remarkably untouched in a totally gutted out car at a checkpoint near Kremlin-backed militant-controlled Sloviansk  That time Russian propaganda used the business card as ‘proof’ that Right Sector was behind the shootout.  This nonsense prompted a twitter meme storm, in which Yarosh’s business card was, for example, handed from God to Adam in Michelangelo’s fresco painting on the ceiling of the Sistine Chapel.

If Russia had any evidence to back the ‘confessions’ broadcast by the Russian media, the FSB would not be taking such efforts to prevent the men seeing proper lawyers.

In Soviet times, Ukrainians living abroad tried to circulate information about political prisoners.  It would be bitterly ironical if now Russia succeeded in concealing its repression in Crimea, especially when the victims of such thuggery are so absurdly miscast.