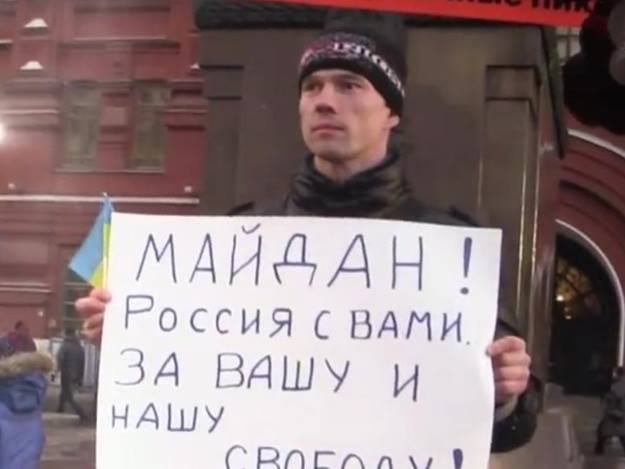 MAIDAN! Russia is with you. For your freedom and ours!

Russia’s Supreme Court has revoked the sentence against Ildar Dadin under a draconian anti-protest law and recognized the activist’s right to ‘rehabilitation’, with this meaning a formal apology and – in theory – compensation. This is an important move, but if Russia wants to demonstrate a shift away from repression, it should revoke other laws, like that used to imprison people for criticizing its invasion and annexation of Crimea.

He will be released as soon as the prison receives the stamped court ruling.  The new ruling comes just 12 days after the Constitutional Court found the anti-protest law basically constitutional but in need of amendments, and called for a review of Dadin’s case.

Dadin has been imprisoned now for just over 2 years after being one of the first people arrested under a new Article 212.1 of the Russian Criminal Code, introduced in July 2014.  That envisages a sentence of up to 5 years if a court has issued three rulings on administrative offences within 180 days.  Dadin was accused of taking part in protests on Aug 6, Aug 23, Sept 13 and Dec 5 2014.  It is quite standard in today’s Russia for police to detain people at entirely peaceful protests, with administrative protocols then drawn up and processed by the courts with no questions asked.   All of this, and the use of provocateurs, working closely with the police, had clearly happened in Dadin’s case.

He was originally sentenced by Judge Natalya Dudar from Moscow’s notorious Basmanny Court to 3 years’ imprisonment on Dec 7, with this sentence a full year more than demanded by the prosecutor.  The sentence was later reduced by 6 months, but the verdict always upheld.

Dadin is well-known to Ukrainians for his active support for Euromaidan, and it seemed clear from the court hearings that Dadin’s support for Maidan and defence of Ukrainian political prisoners held in Russia had contributed to the sentence over totally peaceful protest.

Neither the Constitutional Court, nor Supreme Court, actually examined the flawed administrative penalties and trial.  Dadin had lodged a constitutional submission, challenging the law itself, rather than its application in his case.

There has been international condemnation of the law, with widespread agreement that Article 212.1 breaches Russia’s Constitution and legislation, as well as international law by, among other things, imposing double punishment for the same actions, first via administrative legislation, then criminal. The criminal charges can carry a term of imprisonment of from 3 to 5 years despite the fact that the supposed ‘offences’ are of a formal nature and do not present any danger to the public.

On Feb 10, however, the Constitutional Court decided in a very long judgement that the article did not breach Russia’s Constitution, but it did recommend key amendments and order a review of Dadin’s case.  The Court stated that criminal liability for infringements at public events should be commensurate with the danger to the public of the actions.  Criminal liability should not be applied in cases where the infringements were merely formal and caused no harm.  The court needed also to provide the person’s intent to infringe established procedure for organizing or holding a public event.

It also stipulated that the administrative penalties must have come into force before any proceedings were initiated under Article 212.1.  This had not been the case with at least one of the penalties against Dadin.

Although the decision to review Dadin’s conviction was welcomed, there was criticism of the judgement itself.  Kirill Koroteev, from the Memorial Human Rights Centre, said that the CC judgement had made further application of 212.1 more difficult, but has not prevented it”.

Koroteev, however, also believed that a new trial in Dadin’s case might still end in conviction.  The fact that the Supreme Court, which had previously upheld his conviction, on Wednesday revoked the ruling and simply terminated the case suggests that the order for this came from above.

If Dadin’s very welcome release is supposed to create the impression that Russia is retreating from repressive measures against activists exercising their constitutional rights, it has a long way to go.  If Dadin is the only person to have been imprisoned under 212.1, other repressive laws passed recently are being actively applied to imprison or penalize people for exercising freedom of speech and right to peaceful assembly.  The most menacing of the new amendments – Article 280.1 – imposes a mandatory 5-year sentence for something labelled ‘public calls to actions aimed at violating Russia’s territorial integrity’.  This new norm, introduced in May 2014, has, as feared, been used to imprison Russians for criticizing Russia’s invasion and annexation of Crimea.  Most grotesquely, it is being used to prosecute Crimean Tatar leader Ilmi Umerov and Ukrainian journalist Mykola Semena.  Both men are charged under this law for expressing the same view as that taken by the UN, EU, OSCE and all democratic countries, namely that Russia must stop occupying Crimea.