Fascism is here in Russia. Anti-war activities in Russia, 15-22 AugustRussia wants 64-year-old Crimean Tatar to die in prison for refusing to collaborate in occupied Crimea Those who unleashed this war will not go to Heaven. Anti-War activities In Russia, 7-14 August 2022Russia sends forcibly mobilized Ukrainians from occupied Donbas to die as ‘live bait’ at the frontlineOpposing the Orwellian State. Anti-war activities in Russia, 27 July-5 August‘Ті, хто розв’язав агресію, не потраплять до раю’ — дайджест російських протестівRussia "takes revenge’ for humiliating attack on Crimea military base by new mass arrests of Crimean Tatars “He lay on the sidewalk, naming towns and cities in Ukraine”. A digest of anti-war activities in Russia, 23-29 JulyUkraine: No peace talks possible if Russia continues with fake referendums to annex Ukrainian territory Invaders stage fake referendum so they can accuse Ukraine of ‘invading Russia’ 2,500 kms on Foot to Protest against the War. Anti-war Activities in Russia, 17-26 July 2022Invaders threaten to take children away if parents don’t send them to be indoctrinated ‘to love Russia’ “Let’s Fight the Propaganda Together” Anti-war Activities in Russia, 9-16 July 2022Russia confirms plans to annex occupied parts of Zaporizhzhia and Kherson oblasts“Do You Still Want This War?” Anti-War Activities in Russia, 3-9 July 2022Necessary conditionsHow are Russia’s missile strikes on civilians in Vinnytsia and Chasiv Yar not terrorism? Crimean Tatar journalist detained on charges of ‘discrediting Russian army’ and jailed for "showing resistance"Feminists, “Railroad Partisans” and School-Leavers Protest. A Digest of Protests in Russia, 25 June-2 July 2022 Russia instals FSB man, other Russians to ‘govern’ occupied Kherson where the population hates them
• Topics / News from the CIS countries 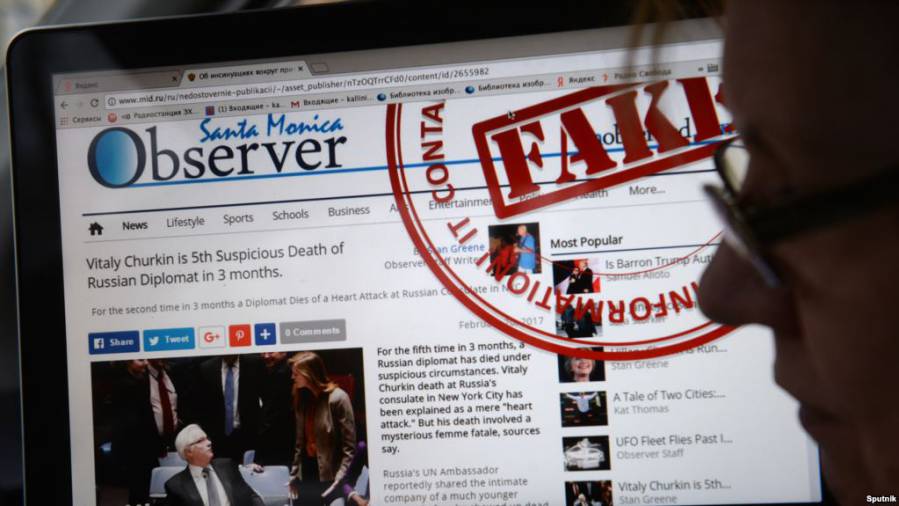 The ministry has kept its debunking efforts to a minimum.

Russia has embraced the buzzword "fake news" to dismiss coverage it considers unfair or flat-out wrong -- even as Western governments accuse Moscow of exploiting false and misleading news for political gain.

The Foreign Ministry this week unveiled a new section on its official website highlighting what it calls "examples of publications spreading false information about Russia."

So far, only five media outlets have landed in the ministry’s crosshairs: NBC News, The Telegraph, The New York Times, and Bloomberg. Even the significantly lower-profile Santa Monica Observer, a website in California, attracted the ministry’s scolding.

The ministry has kept its debunking efforts to a minimum.

In each instance, it provides a brief description of the subject matter and a one-sentence rejection that reads, "This material is used to spread information that does not correspond to reality."

Each entry also features a screenshot of the article in question decorated with a red stamp reading, "Fake."

All but one of the articles targeted by the ministry are based on either unidentified government sources or on public statements by political figures. At times, however, the Russian initiative appears to be shooting the messenger.

For example, the Bloomberg article centers on accusations by the campaign chief of Emmanuel Macron, a pro-European candidate in France’s presidential election, that Russian hackers are targeting the politician.

U.S. intelligence has concluded that Russia orchestrated a hack-and-leak campaign that aimed to help President Donald Trump win the White House election in November. It also assessed that the Kremlin deployed propaganda "to Russian and international audiences" as part of the campaign. Moscow denies the allegations.

The Bloomberg piece picked up the comments from France 2 Television, which has not been dinged by the ministry’s "Fake News" page. The Bloomberg story also includes a denial from Kremlin spokesman Dmitry Peskov.

The New York Times piece highlighted by the ministry alleges that "Russia has secretly deployed a new cruise missile that American officials say violates a landmark arms control meeting." The report cites a "senior official who did not provide further details and requested anonymity to discuss recent intelligence reports about the missile" and did not indicate that the paper sought comment from Russia.

Two days after that report, the Foreign Ministry issued a statement saying it remained in compliance with the treaty and accusing Washington of violating the accord.

The most tendentious article featured in the ministry’s "refutations" section is the February 22 piece published by the Santa Monica Observer. The article leans on theories by "conspiracists on Twitter" and posits that the death of Vitaly Churkin, Moscow’s envoy to the United Nations, this week came amid "suspicious circumstances."

There has been no suggestion from U.S. authorities that foul play may have been involved in Churkin’s death, reportedly due to a heart attack, in New York on February 20.

The Santa Monica site itself appears to have a history of publishing dubious, or patently false, news reports.

Foreign Ministry spokeswoman Maria Zakharova told reporters in Moscow on February 22 that Moscow was turning the tables on the West, where officials and media outlets have repeatedly accused Russia and Kremlin-loyal media of peddling falsehoods.

"Let’s swap the roles for a change -- then you’ll see for yourselves how tough it is to prove your case," Zakharova said.

Spurious reports alleging ballot-box stuffing, underground child-sex-trafficking rings, the pope’s endorsement of Trump, and other incredible stories dogged Democrat Hillary Clinton’s campaign, and led to an explosion of fact-checking news sites and other organizations trying to debunk rumors before they spread.

Some researchers have documented how social-media sites like Facebook allowed unverified news to circulate unchecked, with others concluding that it had a noticeable effect on voters’ opinions of candidates.

Since his inauguration on January 20, Trump himself has repeatedly dismissed critical media reports -- including those about alleged ties between his associates and Russia -- as "fake news."