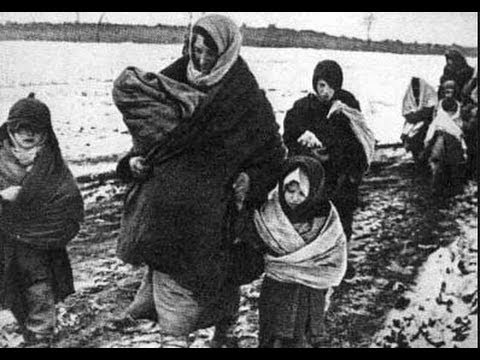 On a cold winter’s night, at around 2 a.m., knocks were heard on doors throughout the small villages.  Armed soldiers surrounded each small house.  One by one, as each family opened doors to their unexpected visitors, they were read a decree by the soldiers, “Under the orders of Josef Stalin, you will be deported.  You have two hours to gather your belongings.  Those who resist will be executed.”

It was February 23, 1944.  In the dead of winter, the people of the Chechen Republic and the Republic of Ingushetia (at that time known as the Chechen-Ingush Autonomous Soviet Socialist Republic) were falsely accused of aiding Nazi Germany and ordered to be deported to Kazakhstan and Siberia.

Shocked and confused, families went back inside to pull their belongings together.  They thought, they believed, that they were only leaving for a few days, so they didn’t pack much, or else they didn’t have much to pack.

In the village of Haybah, over 700 women, children, and elderly were told to gather at a horse stable to await further orders.  The orders never came.  They were burned alive.

In Galanchozh, thousands of people were executed by a firing squad, and their bodies dumped in the Galanchozh Lake.

The remaining were loaded onto trucks, taken to train stations, and crammed onto cattle wagons.   Families and loved ones were separated.

“It was winter.  We had no food, no warm clothing.  The cold was more unbearable than the hunger,” remembers one elderly man, then just a young boy.

There was an ample amount of snow fall, and the frigid winds flew in from all sides of the cattle wagons.  There was no room to lay down.  As people died, their bodies were thrown out of the still moving wagons.  People would try to hide their dead loved ones from the officers of the Russian Army with the hope that they could eventually give them a proper burial.

“Not even half of the people in my wagon made it,” recalled another woman.

It was, by every definition of the word, a genocide of the Chechen and Ingush people.

In total, 478,479 people were uprooted from their homeland and dropped off in the middle of nowhere, during a notoriously cold Russian winter, with nothing but the blue sky over their heads.

Countless lives were lost before the people ever made it to their final destination, and countless more died from hunger, hypothermia, and typhoid fever in the first years of exile.  But the most deaths were caused by heartbreak at being separated from their beloved motherland.

It is estimated that anywhere from 35-50 percent of the Chechen and Ingush populations died.

Today marks the 72nd anniversary of the tragedy.  The world has a long and bloody history, but we must remember every part of it.  At a time when there is so much anger and fighting going on in the world, it is only by remembering our past mistakes do we have the slight hope of not repeating our failures.

My people, the Chechen and Ingush people, have seen a lot of war and bloodshed, both 72 years ago and in the past 20 years.  But to describe my brave people, I always remember these lines from Invictus by William Ernest Henley:

“In the fell clutch of circumstance

I have not winced nor cried aloud.

Under the bludgeonings of chance

My head is bloody, but unbowed.”

After 13 years of exile, the Chechen and Ingush people were finally allowed to return to their motherland in 1957.