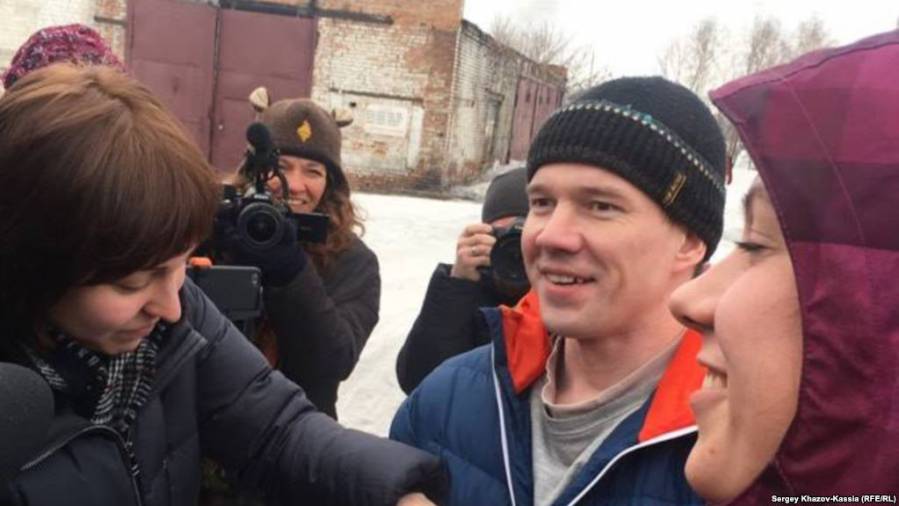 BARNAUL, Russia -- Hours after his release from prison, Russian political activist Ildar Dadin recounted how he was "broken" by physical abuse during his 15 months behind bars.

Appearing before journalists in a cramped, stuffy apartment, the 34-year-old described in detail the torture he says he endured while imprisoned in northern Russia before his transfer to the Siberian facility he was freed from on February 26.

Dadin had been serving a 2 1/2-year sentence after being convicted under a controversial Russian law that criminalized participation in multiple unsanctioned protests within a 180-day period. Prior to the introduction of the law passed in 2014, such offenses were considered misdemeanors.

Dadin was freed from custody after the Supreme Court overturned his conviction. He is the only person to have been convicted under the legislation, which has been heavily criticized by rights groups and lately even called into question by the Kremlin.

In the wake of Dadin’s release, and calls by human rights ombudswoman Tatyana Moskalkova for the legislation to be repealed, presidential spokesman Dmitry Peskov said on February 27 that the law might undergo government review.

Ildar Dadin was the only person convicted under the protests law.

In November 2016, Dadin’s case gained international attention when he made allegations of torture while in prison.

The torture claims sparked public outrage, prompted several top human rights workers to conducts probes at the prison, and ultimately led to Dadin being transferred to a new facility in Siberia’s Altai region.

After initial confusion following the Supreme Court ruling about when he would be finally released from prison, and speculation he could be stuck behind bars for several more days, Dadin finally emerged on February 26, coatless and flanked by prison officers.

He briefly answered journalists’ questions before leaving in a car with his sister and wife. Eight hours later, shortly after midnight and a four-hour drive away in the region’s capital, Barnaul, Dadin spoke at length.

He at times spoke confusingly, but made one thing very clear: he tried to continue his civil activism behind bars, but was "broken" and unable to withstand the pain.

He says his first clash with prison authorities came while he was in pretrial detention in Petrozavodsk, in the far-northern Karelia region, when he complained to a senior prison official that he was not being allowed to sleep and that this was unconstitutional.

"He didn’t like this, turned round immediately, made no attempt to register the complaint, and said, ’You and I will speak about the constitution and the law in No. 7 [IK-7],’" a reference to a prison in Karelia.

Dadin said his cellmate became "frightened" about what lay in store for Dadin at IK-7, but that he himself remained confident that prison authorities would not risk abusing an inmate with a known public profile

Dadin said he arrived at IK-7 on September 10, was told to leave his belongings, and was taken to another room for 20 minutes. When he returned, his belongings were searched, and prison officials found two blades. Dadin alleged the weapons were planted.

He said he was transferred to a punishment cell, but not formally registered there. He said he was ordered to stand facing the wall, and did put his hands against it, but refused to fully comply on the grounds that such procedure is not outlined by law.

For this, he said, he was verbally abused and threatened with rape. Ultimately he was left in the punishment cell, which featured a faulty toilet and sink, after guards had removed his toilet paper, toothbrush, toothpaste, and towel. In response, he demanded a prosecutor be summoned to register a complaint about his conditions, and he then declared a hunger strike.

Dadin said he was then taken to the office of the prison warden. There, he said, he saw instructions on the wall outlining what inmates should do upon entering the office, including asking for permission to enter and identifying one’s name, surname, sentence, date of entry, date of exit. Dadin declined to follow the instructions on the grounds they were not enshrined by official protocol or law.

He said the warden and three colleagues pushed him out into the corridor where they beat him, before continuing the beating inside the office. He alleged that the warden struck the first blow. "Like the leader of a gang, he led by example: ’You can do political prisoners too, don’t be afraid, beat him,’" Dadin said, describing the warden’s actions.

He said he was then taken back to his punishment cell, where he was again beaten during an evening search.