New Laws in Ukraine Obstruct Prosecution for Crimes against Maidan ActivistsHalf the Berkut officers deployed against EuroMaidan activists remain police officersYanukovych ‘doesn’t remember’ the bloodiest day of Maidan killingsPolitical PR & sabotage instead of real investigation on eve of 2nd Maidan anniversaryUkraine’s only trial over Maidan killings under threatPolice & judges accused of impeding prosecution of crimes against Euromaidan activistsAnother person charged with Euromaidan crimes allowed to escape?Ex-Security Service chief in custody over Euromaidan killingsSo who doesn’t want justice for Euromaidan victims?High-ranking Berkut officer charged over Euromaidan killingsEuromaidan: A Year of Impunity and what went wrongEx-Berkut officer on trial over AutoMaidan ambushEx-Berkut officers arrested on suspicion of involvement in Maidan killingsWhere are 13 mysterious Berkut sniper suspects?Who (hasn’t) answered for crimes against Maidan?Maidan killings suspect missing after being released from custodyTwelve detained on suspicion of involvement in the gunning down of Maidan protesters (updated)Blood and Berkut Sniper Bullets on the President’s HandsMustafa Dzhemiliev on Maidan: I’m proud of you, dear fellow UkrainiansBerkut snipers aimed at protesters
• Topics / The right to a fair trial
• Topics / Human Rights Violations associated with EuroMaidan

Not the Right Way to Bring Yanukovych to Trial 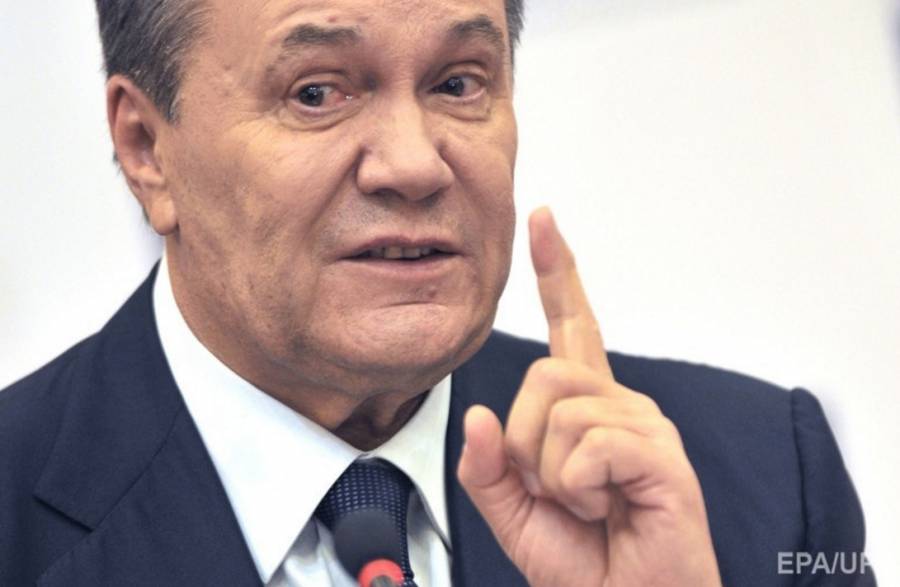 Ex-President Viktor Yanukovych at a press conference in Rostov on the Don,  Photo: EPA

The Kremlin is well known for pulling former Ukrainian President Viktor Yanukovych out of hiding for its own purposes. Now Ukraine’s leaders have been accused of using Yanukovych as an excuse to push legislation that may have dangerous repercussions for Ukraine’s justice system—while not necessarily bringing Yanukovych and his cronies any closer to justice.

Yury Lutsenko, Ukraine’s prosecutor general, has been promising to begin Yanukovych’s trial in absentia in March this year. The move and legislative amendments required for that to occur have clearly been coordinated with President Petro Poroshenko. There is considerably less enthusiasm from Serhiy Horbatyuk, the chief investigator into crimes against Maidan activists, as well as from lawyers representing the families of Maidan victims and from other civic activists.

This is not a question of whether Yanukovych and others should be held to account in a court of law. The problem is ensuring that any conviction is fully in keeping with the law and will not be legitimately challenged in international courts. It is worth noting that the criticism is coming from experienced lawyers, while the main lobbyists for the bill—and this includes Lutsenko—are essentially politicians.

Lutsenko is hoping to try Yanukovych on several charges: of usurping power, undermining the armed forces’ defense capacity, and state treason. Ukraine’s parliament adopted amendments in May 2016 enabling trial in absentia; they allow for pre-trial investigation if a person is on the wanted list, but are valid only until April 15, 2017. Amendments to the Criminal Procedure Code (CPC) that remove the problem with time limits are being proposed in a draft law currently before parliament.

Draft bill 5610, if passed, will also increase the timeframe to eighteen months for a criminal investigation in which a person is in hiding; additionally, it will allow people accused of serious crimes committed by a criminal or terrorist organization to be detained for eighteen months.

Before the vote on the bill on February 23, Lutsenko told MPs that once it was adopted, 119 criminal prosecutions against Yanukovych, his former Interior Minister Vitaly Zakharchenko, as well as people suspected of involvement in the gunning down of Maidan protesters would be passed to the courts.
Lutsenko has repeatedly claimed that Russian citizens like Sergei Glazyev, Russian President Vladimir Putin’s adviser, and the Russian Defense Minister Sergei Shoigu would fall under the law. There are almost certainly grounds for seeking their prosecution in the International Criminal Court, but it is difficult to see how a life sentence against Glazyev passed by a Ukrainian court on charges of crimes against peace and international order would achieve anything more than publicity.

The bill has been roundly condemned by Oleksandr Banchuk from the Centre for Legal and Political Reform, who says that Poroshenko and Lutsenko are using the effort to put Yanukovych on trial as a pretext for a major offensive against Ukrainians’ rights.

He warns of the impact on ordinary citizens if the law is passed. Up until now, it has been understood that a person cannot be tried in absentia, and that the person must be informed that they are under suspicion, charged, or that the case has been passed to the court. While trial in absentia for particularly grave crimes may remain the exception, the CPC’s amendments could lead to dangerous abuse. Article 135 § 2 would now read that if a person is believed to be outside Ukraine, a notification would be sent to their last known residence and published in official publications.

Many Ukrainians do not live where they are officially registered, and Banchuk foresees a potential surge in fabricated prosecutions. A person who had not been found at their formal place of residence could be put on the wanted list and “summoned for questioning” in official publications they would be unlikely to read. They could, in short, end up being convicted without hearing of it.

Banchuk also calls the extended detention period a clear violation of the right to liberty, while the proposed amendments to Article 190, allowing for effectively indefinite arrest warrants, also breach the principle of legal precision. Who decides what constitutes “the particular complexity of the proceedings and existence of exceptional circumstances” that can be used to justify holding a person in detention for eighteen months? The bill is reverting to repressive features of the Soviet CPC and clearly breaches the constitutional prohibition on laws narrowing citizens’ rights.

Horbatyuk also believes that the draft bill needs major work. There must be a norm giving a person the right to judicial review, as long as they can prove that they did not know about the trial or had a proper reason for not attending. The bill also has other procedural infringements and a lack of legal clarity that would ultimately undermine convictions.

There have been warnings from the outset that Ukraine’s leaders are risking the worst of all scenarios: a finding by the European Court of Human Rights that Yanukovych’s right to a fair trial has been violated.

The main reason is that the current bill and its predecessor are both openly aimed at putting Yanukovych on trial, laying Ukraine open to accusations of selective justice.

This is not simply an abstract fear. Poroshenko has stated that the bill is needed so that a court can establish Yanukovych’s guilt, and Yanukovych’s lawyer, Vitaly Serdyuk, has already said that that statement will be added to his team’s application to the Strasbourg Court “as proof of political persecution” of Yanukovych.

There are very serious grounds for bringing charges against Yanukovych and other high-ranking officials. Horbatyuk and his Special Investigations Department have been praised by lawyers and civic groups linked with the Euromaidan for their systematic approach and commitment to ensuring that the cases sent to the courts result in conviction. All of this, however, takes time.

There is real concern that the drive for a high-profile Yanukovych trial could result in a sloppy prosecution and conviction that could later be challenged. Vitaly Tytych, one of the lawyers representing the families of Maidan victims, has stressed that the families are not interested merely in pieces of paper. There need to be real verdicts passed by independent courts that are recognized internationally, with all the consequences that entails.

This is owed the victims, their families, and the Ukrainian people, and should not be sabotaged by politicians.