Russia’s Supreme Court rules that the USSR did not invade Poland in 1939Russian fined for reposting that the USSR & Nazi Germany invaded PolandRussia says Poland, not USSR, was Hitler’s Ally and Responsible for HolocaustKremlin-funded Sputnik Int. claims West criticizes Stalin to weaken Russia & its leadershipKremlin’s proxies purge memory of victims of Holodomor and political repressionRussia’s ’new approach’ to Stalin and extended secrecy about his victimsStalin Museum: Putin’s Russia Immortalizes Bloody DictatorAnger and Protest over Stalin Monument in YaltaPortrait of Stalin appears in Russian-occupied CrimeaStalingrad as latest step in re-glorification of tyrantNeo-Nazis in Moscow’s ServicePro-Russian separatists start their own anti-Semitic TV channelPro-Russian, anti-Roma, anti-Semitic and hunting out Ukrainian speakersThe Donetsk anti-Semitic leaflets – what should not be overlookedEast Ukraine crisis and the ’fascist’ matrixRussia continues its false narrative as defender of oppressed minorities in UkraineRussian propaganda claims Jewish organizations supporting Maidan are bringing on "second Holocaust"The Crimean referendum’s neo-Nazi observersPutin’s Neo-Nazi HelpersChief Rabbi and others dismiss Putin’s “anti-Semitic extremist” claims
• Topics / News from the CIS countries 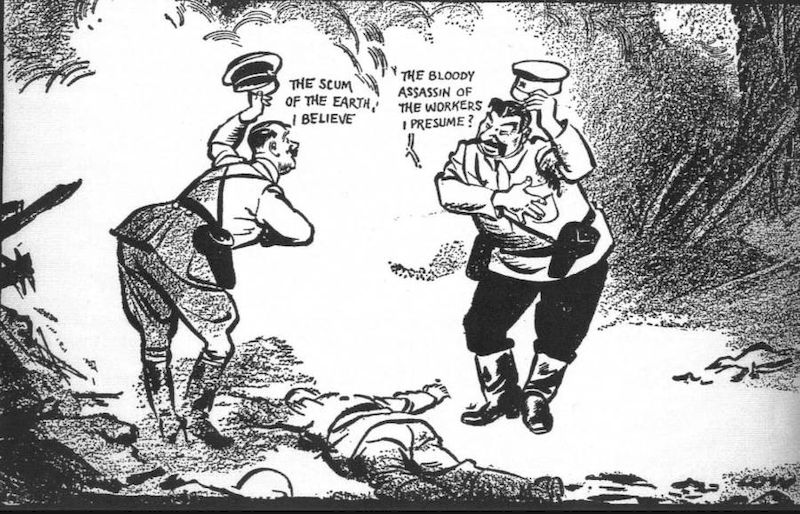 Russian blogger Vladimir Luzgin has asked the European Court of Human Rights to defend his right to state quite correctly that both Nazi Germany and the Soviet Union invaded Poland in 1939.  He was left no alternative after Russia’s Supreme Court agreed that this unpalatable truth constituted ‘rehabilitation of Nazism’. Luzgin is the first person in Russia to have been convicted under a controversial law which was, from the outset, condemned as an attack on historical debate.  It has proven to be an offensive against historical facts.

The 37-year-old from Perm in Siberia was convicted on June 30, 2016 and fined 200 thousand roubles for reposting an article on his social network page entitled ‘15 facts about Bandera supporters, or what the Kremlin is silent about’.  The Ukrainian theme, especially with respect to the Ukrainian nationalist leader Stepan Bandera, would have almost certainly attracted FSB [Russian security service] attention to Luzgin back in September 2015, however the criminal charges were brought over the following lines:

The first court considered this to be “knowingly false information”, claiming as justification that the statement contradicted the facts set out in the Nuremberg Tribunal sentences.  That verdict was upheld by Russia’s Supreme Court on September 16, 2016, the 77th anniversary of Nazi Germany’s s invasion of Poland, 17 days before the anniversary of the Soviet invasion from the east.

Under Russian President Vladimir Putin, Moscow has consistently denied such undeniable facts as its invasion of Crimea and military involvement in Eastern Ukraine.  It unfortunately even finds people willing to accept the Kremlin’s narrative on such subjects.

Here the situation is radically different.  You will not find any reputable historian or source denying that the Soviet Union invaded Poland.  Even Putin has only tried to defend the Molotov-Ribbentrop Pact, whose secret protocol carved up Poland, not to claim that there was no such agreement.

This has not prevented a shifting of focus in Russia which certainly distorts the facts.  There was outrage in Poland in September 2015 when first Russia’s ambassador to Venezuela, then its ambassador to Poland both tried to claim that it was Poland that had provoked WWII, not the Soviet Union.

The Law on ‘Rehabilitation of Nazism’, officially authored by Iryna Yarovaya, was signed into force on May 5, 2014. The new Article 354.1 of the criminal code it introduces carries a sentence of up to 3 years imprisonment for what is termed ‘public denial or approval of the facts established by the sentence of the Nuremberg Tribunal’.  The same norm makes it possible to prosecute somebody for “spreading knowingly false information about the activities of the USSR during the years of the Second World War”.  There is no guidance as to how something is determined to be false.  This is how Luzgin came to be fined for telling the truth.

The law was condemned by the Sova Centre as aimed at stifling historical discussion and restricting freedom of speech.

Kommersant reports that Luzgin has appealed to the Court in Strasbourg, asserting infringement of his right to freedom of expression under Article 10 of the European Convention.  Violation is also alleged of Article 7 of the Convention, guaranteeing punishment solely on the basis of law.

Another, equally cynical, amendment to the criminal code in May 2014, Article 280.1 has already been used to imprison Russians and is now being applied against Ukrainians in occupied Crimea for saying that Crimea is Ukrainian and that Russia’s occupation should end.

Luzgin’s surreal conviction was doubtless intended as a chilling warning of what to expect if you raise questions the current regime does not want asked, or facts it wants blurred or downright denied. .

It is very likely that the ongoing detention on absurd charges of historian and Memorial activist Yury Dmitriev is also intended as a warning to others not to expose information about the perpetrators of Stalin’s Terror.