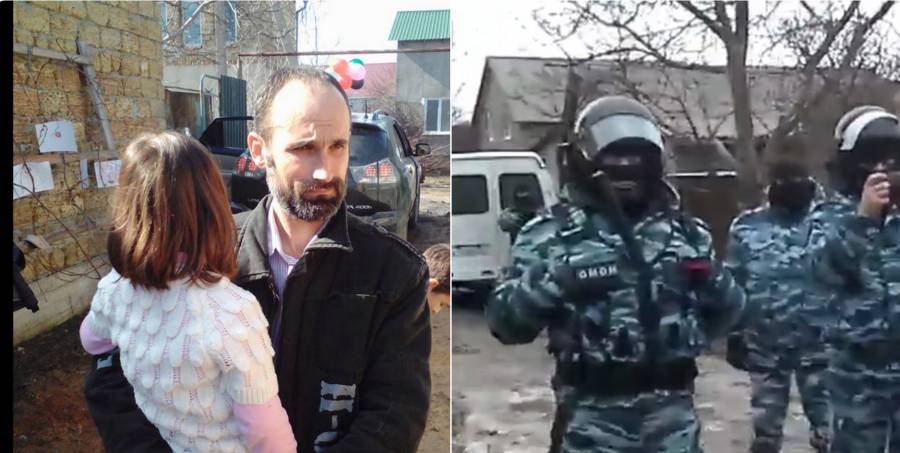 Jailed Crimean Tatar activist Marlen Mustafaev has finally been released, 6 days after the 10 friends and neighbours imprisoned for standing outside his home in solidarity with the detained activist and reporting on the search underway.  The mass detentions on Feb 21 and absurd sentences upheld at farcical court hearings marked a new, disturbing escalation in Russian attempts to quash any independent thinking and resistance to terror tactics in occupied Crimea.

Judging by the welcome given to Mustafaev and, earlier, the other men, resistance remains strong, but nobody is in any doubt that the events on Feb 21 were about intimidation.  Early that morning, OMON riot police officers detained Mustafaev on his way to work and took him back to his home to carry out a search.  News of the latest armed search travelled quickly and a number of Crimean Tatars gathered and began videoing and streaming the masked officers standing guard outside Mustafaev’s home.  In a move obviously aimed at intimidation, one of the officers openly photographed the men who had gathered.   They did not disperse and finally 10 men were themselves seized by the officers and taken away.

Mustafaev was taken to the so-called Centre for Countering Extremism and charged under Article 20.3 § 1 of the Code of Administrative Offences [CAO], supposedly for a social network post on VKontakte in July 2014 which allegedly showed a Hizb ut-Tahrir symbol.  The initial court hearing was under judge Viktor Mozhelyansky who has become notorious for his willingness to rubberstamp politically motivated rulings. This was no exception.  Lawyer Emil Kurbedinov reported that all his applications – to call the prosecutor, the ‘expert’ who gave an opinion on the symbol, or even to examine screenshots of the purportedly offending material – had been rejected, and Mustafaev sentenced to 11 days imprisonment.

The other men were sentenced to 5-days imprisonment with many of them not even allowed a lawyer at the ‘court hearings’.

One of the men Osman Arifmimetov reported that the Crimea High Court judge at his appeal hearing on March 2 decided to make some pretence of a real hearing, by supposedly viewing video evidence and questioning ‘witnesses’.  Only the police had turned up, and none of the video footage suggested that the men detained had in any way obstructed transport.  The police ‘witnesses’ muddled their testimony with the judge prompting them at times.

It would be hard to even speak of appearances during the appeal hearing over Alim Karimov’s detention.  The police officer who turned up had not been present during the detentions, and he had drawn up the protocol on the basis of material presented by other police officers.  He was unable to explain why testimony of supposed ‘witnesses’ was all identical and written in the same handwriting, and why he had accepted them, despite the lack of any signatures from the officers who had allegedly received the testimony.

All appeals were rejected.

Everything about such lawless arrests is disturbing, but one especially malevolent element is the accompanying lies on Russian propaganda channels.  This was first seen after the extraordinary detention and imprisonment of human rights lawyer Emil Kurbedinov and civic activist Seiran Saliev.  Then on Feb 21, TV Zvezda, a channel with strong links to Russia’s defence ministry excelled itself.  The totally false claim that the detentions were on suspicion of links with Hizb ut-Tahrir (an organization which is legal in Ukraine but which Russia claims, without any credible evidence, is ‘terrorist’) can come from an official of the occupation government.  Not so the footage from some other arrests altogether which had nothing to do with the detentions on Feb 21.

Such overt efforts at intimidation and at slandering victims of repression are mounting in occupied Crimea.  Crimean Tatar leader Ilmi Umerov, himself a victim of politically motivated persecution, called the arrests on Feb 21, an attempt “to keep everybody in a state of numb fear”.  It was also, he stressed, a challenge for even greater unity.

The persecution of lawyers representing victims of repression and attempts to stop others reporting arrests and searches are aimed at ensuring that crimes committed by an occupation regime go unreported.  We can all help ensure that they don’t succeed.