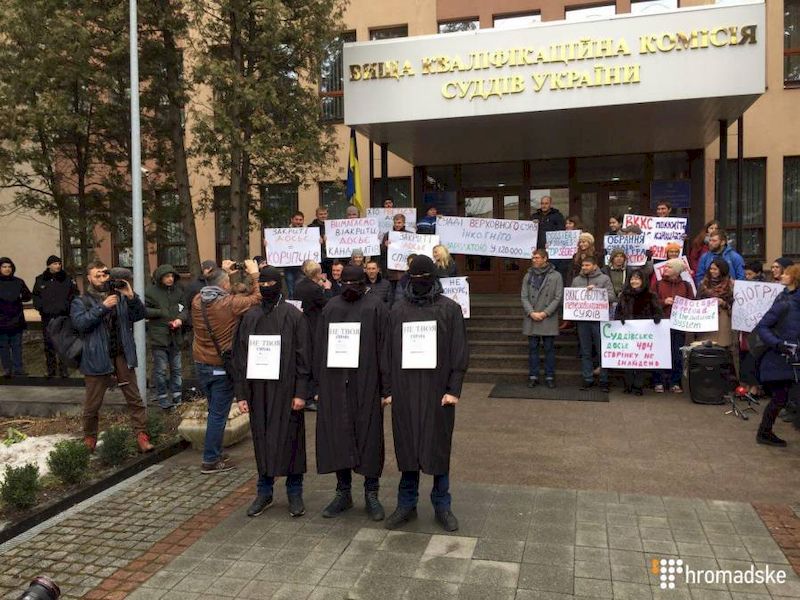 By the end of Viktor Yanukovych’s presidency in February 2014, virtually all vestiges of judicial independence had been eroded in Ukraine, together with any public confidence in the justice system. Three years later, only a small number of the most corrupt judges have lost their posts. It is rightly difficult to dismiss judges, but it should be at least as difficult to appoint compromised judges. That was the theory behind promising new procedures for ensuring transparency and open competition for vacant Supreme Court judge posts. In practice, this has proved much less possible, and civic groups have mobilized to prevent yet another rejiggering of a reform-resistant status quo.

In 2016, the Verkhovna Rada adopted legislation that strengthened the role of the Supreme Court; it laid out steps to ensure a renewal process of its judges through competition. Applications were invited for the first 120 Supreme Court vacancies in November 2016, and full profiles of all candidates should have been posted almost immediately on the official website of the High Qualification Commission of Judges, but they weren’t. The Commission has claimed that it lacks the resources to do so; however, it has proven equally reluctant to provide information in response to formal queries.

The Commission’s resistance is particularly disturbing in light of the  about the competition and candidates gathered by the civic initiative .

Serhiy Kozyakov, the head of the Commission, has made much of the unprecedented participation of candidates from outside the judicial system. This can ensure new blood, but only if they are allowed to compete in the entire process. The selection committee quietly removed 45 percent of outside candidates before any tests were taken, while only 7 percent of current judges applying were not allowed to continue. This means that  could come from outside the system, and this is a best-case scenario.

While legal knowledge and skills are imperative, experience is not necessarily an advantage. In many cases, it seems likely that the candidates would prefer their past experience to be concealed.

Yaroslav Romanyuk was appointed president of the Supreme Court shortly before the Euromaidan began. He is remembered for  of Yanukovych’s 2014 “dictatorship laws,” which were clearly aimed at crushing the Maidan protests and imprisoning large numbers of activists. Romanyuk claimed the laws complied with European standards and were legitimate. He later initiated a constitutional submission against the law on lustration, which sought to remove high-ranking officials implicated in repressive measures under the Yanukovych regime.

It is not only Romanyuk’s past that has alarmed critics. During one of the tests of candidates in February, it came to light that the case Romanyuk was supposed to examine as a test was in fact one he had previously ruled on. He has  that this gave him any advantage, and the Commission has claimed that the test was prepared before the list of candidates was known. That may be the case, but the chances that the current president would apply for renewal were high and the Commission should have excluded any cases he’d previously ruled on.

Chesno’s Taras Shevchenko doesn’t understand how  could have got on the list. Under Yanukovych, Shevchenko asserts, Yemelyanov epitomized judicial corruption and is suspected of having blocked the automated selection procedure, which ensures that judges are randomly assigned to cases to prevent corruption. Instead, judges were selected who could be relied on to hand down the “right” rulings. This was particularly evident with the politically motivated trials of Yulia Tymoshenko, Yuri Lutsenko, and others. Chesno has listed  about Yemelyanov and many others.

Chesno  that a staggering 80 percent of the twenty-seven judges from the High Administrative Court applying for Supreme Court posts were implicated in dodgy rulings. Nineteen of the twenty-seven candidates have also been reluctant to take on cases aimed at removing compromised judges, and there are also a number who are millionaires, some of whom have been caught “forgetting” to declare property.

On the first day of the written test, RFE/RL journalist Serhiy Andrushchenko  with candidates as they arrived in expensive cars not indicated on their
income declarations. Valentina Kurylo, a judge from a Donetsk oblast appeal court, couldn’t remember whether she owned the BMW she arrived in, and claimed that she didn’t know what her son-in-law, who drove the BMW, does for a living.

The next day the number of candidates who arrived on foot or by taxi significantly increased.

Time is short; the law requires the new Supreme Court to be in place by April 1. On March 1, Chesno and other civic groups decided they had had enough. They held  on the steps of the High Qualification Commission building. Activists waved banners linking secrecy about candidates with corruption and accusing the Commission of sabotaging the process. After a fraught meeting with Shevchenko and others, the Commission issued a statement promising access to profiles for each candidate still in the running (there are 524) before interviews are held. The Commission agreed to respond to requests for information, and that it would not begin interviewing candidates until it received assessments from the Public Integrity Council. (Created by the 2016 judicial reform, the Public Integrity Council is made up of NGO representatives, lawyers, scholars, and journalists chosen for their integrity and political neutrality. Chesno has called  “the only instrument civil society has for blocking unworthy candidates for the post of Supreme Court judge.”)

It all sounds good, but so did the initial assurances, and civic groups remain on high alert. A lot is at stake.