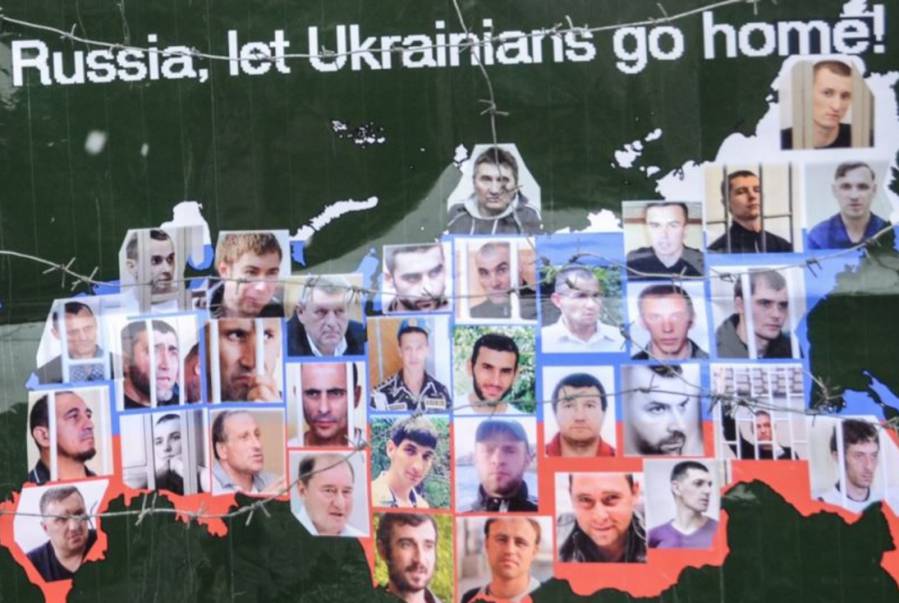 The European Court of Human Rights has found that imprisoning people thousands of kilometres away from their families is a violation of their right to family ties. The judgement, albeit in another case, is of vital importance since Russia is illegally imprisoning Ukrainian filmmaker Oleg Sentsov, civic activist Oleksandr Kolchenko and many other Ukrainians, especially from occupied Crimea, in the far east or north of the Russian Federation.   In at least some of the prisoners’ cases, the vast distance seems clearly aimed at isolating the prisoners from family, lawyers and the media.

The Court concluded that the “Russian domestic legal system did not afford adequate legal protection against possible abuses in the field of geographical distribution of prisoners and that there had been a violation of Article 8 of the Convention in each case.

Russia is already in grave breach of international law due to its application of Russian legislation on Ukrainian territory which it is illegally occupying. In a large, and growing, number of cases, Ukrainians are being held on politically-motivated grounds, or in violation of fundamental human rights.

Oleg Sentsov, Oleksandr Kolchenko, Gennady Afanasyev and Oleksiy Chirniy  all opposed Russia’s annexation of Crimea.  They were arrested in May 2014 in Crimea and held incommunicado, without access to lawyers, for around 3 weeks before being shown on Russian television and declared ‘terrorists’ on May 30.

The trial and huge sentences against Sentsov and Kolchenko for absolutely nothing have been internationally condemned, yet Russia is refusing to release them and has even claimed that the men ‘automatically’ became Russian citizens.

The entire ‘case’ was based only on testimony tortured out of Afanasyev and Chirniy, for which they got minimum 7-year sentences.  During the Sentsov – Kolchenko trial, Afanasyev disobeyed FSB orders and retracted all testimony, stating that it had been extracted through torture.  He was shortly afterwards sent to a particularly tough prison in the far north of Russia, 2,700 kilometres from his home.  That distance, interestingly enough, prompted perhaps the only genuine court ruling in all the politically motivated cases of Ukrainians held in Russia, with the judge actually agreeing that the distance was in breach of the European Convention.

Afanasyev was later, on health grounds, part of an exchange of prisoners, but the other three men remain imprisoned.  Both Sentsov and Kolchenko were sent as far east as Russia could manage, clearly to isolate them from western media and diplomatic attention.

Sentsov’s two children are too young to be allowed to visit their father, and he has refused any visits from other family members, finding this psychologically easier to cope with than the brief visits allowed.  For that reason, since the prison he is in is not one of many notorious for ill-treatment of prisoners, he has not challenged the unwarrantedly isolated conditions.  Larisa Kolchenko, however, was only able to visit her son after a prominent Ukrainian writer launched a campaign to raise the money, since the distance made the expense prohibitive.

Oleksandr Kostenko and Andriy Kolomiyets are, quite incredibly, serving long sentences inside Russian prisoners after ‘trials’ by  Russian-controlled Crimean courts for far-fetched and entirely unprovable ‘offences’ in Kyiv during Euromaidan.

Nuri (Yury) Primov, Ferat Saifullaev and Rustem Vaitov have all been sent to prisons in the Russian Federation after a profoundly flawed trial found them guilty of involvement in Hizb ut-Tahrir.  This is a peaceful organization which is legal in Ukraine and not known to have committed any acts of violence anywhere in the world.  Russia has never given any sensible grounds for banning the organization, but now regularly uses it to carry out mass arrests of Muslims, in the Russian Federation, with long sentences almost guaranteed.  It is now, tragically, bringing such repressive ways to occupied Crimea.

Ruslan Zeitullaev, the fourth person arrested at the beginning of 2015, is currently facing a ‘retrial’ in Rostov, after the original court ruling which had rightly found that there was no evidence that Zeitullaev had ‘organized a terrorist cell’ was overturned.  He is facing a 15-17 year sentence.   The men have 8 small children between them who  have not seen their fathers for three years.  All four men have been recognized by the authoritative Memorial Human Rights Centre as political prisoners.

The list is likely to grow, since 15 other men, including at least two human rights or civic activists, are now in effectively indefinite detention on the same spurious ‘Hizb ut-Tahrir’ charges, and at least 11 other men are currently in detention in Crimea facing equally flawed trials.

Russia invaded and annexed their home, arrested them on extremely dubious charges and is even claiming the right to send them to serve unwarranted sentences anywhere in the Russian Federation.

There are also a number of Ukrainians who were abducted from Ukraine or seized in Russia and sentenced to long terms of imprisonment.  They too are being prevented from seeing family and imprisoned far from the public eye.