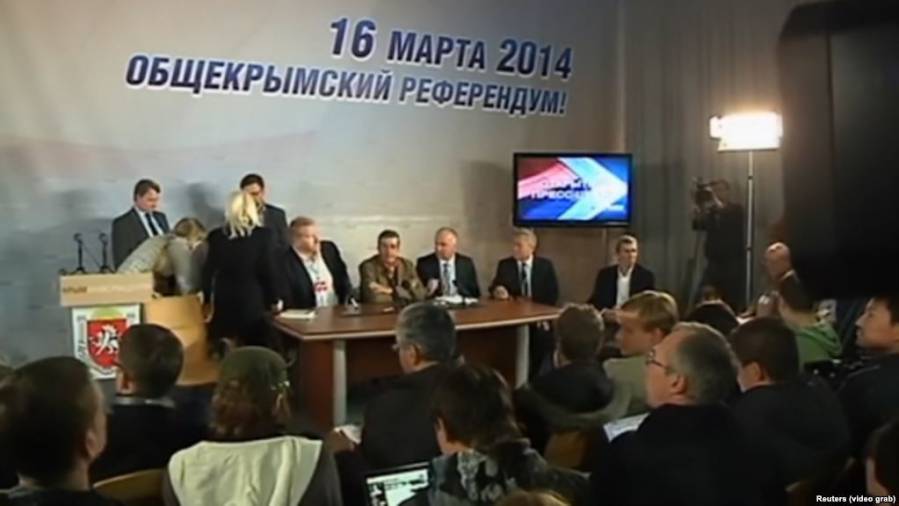 A recently hacked cache of documents indicates that Alyaksandr Usovsky’s activities include maintaining contact with Polish politician Mateusz Piskorski, a founder of a pro-Kremlin NGO that, among other things, organized this group of "international observers" to monitor the 2014 "referendum" in Crimea. (file photo)

Belarusian Alyaksandr Usovsky* describes himself as a historian and publicist. His works include titles such as Who Set Hitler Against The U.S.S.R?, Churchill’s Cannon Fodder, and God Save Stalin! Tsar Of The U.S.S.R. Josef The Great.

And according to a cache of documents hacked from Usovsky’s e-mail and social-media accounts released since the end of February by the Ukrainian hacker site InformNapalm, he is also "a Russian curator" of a loose network of nationalists, radicals, and neofascists across Eastern Europe.

Among other projects, he has specialized in trying to spoil relations between Poland and Ukraine.

In written correspondence with RFE/RL, Usovsky confirmed the authenticity of the hacked documents.

"I have specific political views and I act in accordance with them," Usovsky wrote. "As a private person, I sometimes help my comrades who have similar political convictions -- but always in strict accordance with Russian, Belarusian, and Eastern European laws. If you read the documents that the Ukrainian hackers took from my accounts carefully, you will see that my projects are profoundly and exclusively lawful and legal. These are normal political operations. By definition, they are not public, but that doesn’t make them a conspiracy of enemies of Ukraine."

"I don’t consider myself an enemy of Ukraine," he added. "I am an enemy of all the lying, base, dishonest bastards who have turned Ukrainians into idiots. And I will fight against those bastards to the end, no matter what they think about it."

Poland has been one of Ukraine’s most vocal and active supporters within the European Union, pushing hard for the bloc to impose sanctions against Russia for its interference in Ukraine and generally keeping the perceived threat from Moscow on the bloc’s agenda.

Informnapalm describes itself as a group of volunteer cyberwarriors that monitors open-source information and uses hacking tactics to "show the true face of the Kremlin’s fascism and activities of its followers."

The hacked documents show Usovsky’s extensive contacts with the right-wing Kukiz㤗 political movement, which has the third-largest faction in Poland’s legislature, the Sejm; the rightist KORWiN party; and the nationalist Great Poland Camp (Oboz Wielkiej Polski, or OWP).

He also maintains contact with Polish politician Mateusz Piskorski, founder of the pro-Russian Change (Zmiana) party. Piskorski made headlines in 2015 when he invited representatives of the Russia-backed separatist movements in eastern Ukraine to address the Change founding congress.

Piskorski is a founder of the pro-Kremlin European Center of Geopolitical Analysis (ECGA), which among other things organized a group of "international observers" to monitor the illegal March 2014 "referendum" in Crimea that has been repeatedly cited by Moscow as justification for its annexation of the Black Sea peninsula. Poland’s security service believes Change is a Moscow-inspired project.

Pisorski has long-standing ties to Russian thinker Aleksandr Dugin, a right-wing organizer who advocates a Russian-dominated cultural space extending from Central Europe to the Far East and has spent decades cultivating ties with like-minded activists across the region.

According to e-mails from the fall of 2014, Usovsky funneled 100,000 euros ($106,000) to activists from Great Poland Camp and other groups to organize rallies in Eastern Europe to denounce the Ukrainian government and support the Russia-backed separatists. One of the activists involved in that project reported back to Usovsky that "the bulk of the funds were spent on organizing rallies against [Ukrainian President Petro] Poroshenko and the Ukrainian Army, for Novorossia and the Russian World; some of the money also went to fight against the monuments to the UPA [the Ukrainian Insurgent Army, a paramilitary group that fought against both Nazi Germany and the Soviet Union during World War II] troops in Poland."

On the Russian side, Usovsky was reporting on his activities and appealing for funding from Ukrainian oligarch Konstantin Malofeyev -- known for his financial support for pro-Russian and pro-Orthodox projects in Ukraine, the Balkans, and elsewhere -- and Russian State Duma Deputy Konstantin Zatulin.

Zatulin is a self-proclaimed Russian imperialist who has supported pro-Russian movements in many countries of the former Soviet Union and the former Soviet bloc. He is the director of the Institute of the Diaspora and Integration at the Russian Academy of Science’s Institute of the Commonwealth of Independent States (CIS), and has been declared persona non grata in both Azerbaijan and Ukraine.

Zatulin has a long record of involvement with Russia-backed breakaway movements in conflict zones in the former Soviet Union, including the Georgian regions of South Ossetia and Abkhazia and the Moldovan region of Transdniester.

In his exchange with RFE/RL, Usovsky said only that his activities are funded by "private donations." He claimed he had received no money from Zatulin’s institute but confirmed that he regularly sent project ideas there for "expert" analysis. Among the projects analyzed were ones titled Ukraine Is Not The European Union, Montenegro Vs. Poland, and Moldova Is Not Romania, as well as a project to campaign for an anti-NATO referendum in Slovakia.

RFE/RL contacted all the Polish organizations that figured in the Usovsky e-mails and only KORWiN responded, saying in one word that the documents were "lies," despite Usovsky’s acknowledgement that they are from his accounts.

InformNapalm’s report asserts that Usovsky’s contacts with Malofeyev seem to have dried up in recent months, perhaps because the oligarch has turned his attention to pro-Orthodox and pro-Russian projects in Montenegro and other Balkans countries.

Russia has recently stepped up its efforts to prevent Montenegro from completing its bid to join NATO. The government in Montenegro has accused Russia of backing a foiled October 2016 coup plot, saying it was orchestrated by "Russian nationalist structures" backed by "the Russian state."

In one intriguing exchange, an assistant to Malofeyev contacted Usovsky in October 2014 with a request that Usovsky insert into the Polish media sphere a paparazzi-style photograph of Malofeyev meeting in Bosnia-Herzegovina with Milorad Dodik, the head of the ethnic-Serb component of the Bosnian federation, together with a text that vaguely hinted that Russia was ready to carry out a Crimea-style operation in Bosnia if Dodik failed to be reelected. Usovsky complied with the request, but the purpose of this controlled leak remains a mystery.

Usovsky has also registered an organization called the Eastern European Cultural Initiative in the Slovak capital, Bratislava, although it is unclear what that organization does.

"We have received information about this group, but not from Slovakia -- only from abroad," said Jaroslav Nad, an analyst with the Slovak Security Policy Institute in Bratislava. "We can’t name any serious activities or events connected with this structure in this country. Some speculate that since it is relatively easy to register such nongovernmental organizations in Slovakia, it was done here but with the intention of carrying out activities in other countries."

Jaroslaw Guzy, a political analyst and politician, said it is difficult, given the history of Poland’s relations with Russia, for "openly pro-Russian" groups to get a foothold there.

"But there are groups that are using openly anti-Western slogans, who play on resentment toward the West which also has deep historical roots," Guzy said.

"Of course, Russia is constantly trying to boost its influence with all sorts of political forces [in Poland]," Guzy said. "Paradoxically, it has the biggest effect with radical nationalists. Nationalists often turn out to be pro-Russia, but indirectly -- they promote anti-Western slogans and keep Russia in the background. Polish nationalists also exploit anti-Ukrainian sentiments, which have their own historical roots connected with bloodshed during World War II. They use these emotions to build something that is tactically in line with the goals of Russian policies."

In recent months, there has been a wave of desecrations of monuments and cemeteries in Ukraine that Polish and Ukrainian officials suspect is part of a Russia-backed effort to sow enmity between the two countries.

"Polish officials support us all the time in crucial areas," Vasyl Zvarych, an official at the Ukrainian Embassy in Warsaw, told the website Codastory. "So Russia is trying to stir up anger and make us blame each other."

"Conflict between Poland and Ukraine is a gift [to] the Kremlin," Olgierd Syczewski of the Warsaw branch of the Center for European Policy Analysis was quoted as saying in the same story. "And Russia heats it up, and mainstream media spread it without realizing they are helping Moscow."

Slovak security analyst Nad told RFE/RL he doesn’t believe the number of pro-Kremlin activists in the region has increased.