GANHRI and ENNHRI open letter on serious concerns in relation to the proposal to dismiss the current Ukrainian Parliament Commissioner for Human Rights22 journalists killed since Russia began its total war against UkraineFamilies and lawyers prevented from attending Russia’s reprisal sentencing of Crimean Tatar journalist and civic activists Russia continues its first machine for destroying Crimean Tatar and other Ukrainian families Report concerning the investigation of the mass unlawful use of force to the convicts of the Oleksiivska correctional colony (No.25) on January 8, 2020 Russian prosecutor seeks 18-year sentences against Crimean Tatar journalist, human rights defender and civic activists Obstacles to Registration and Citizenship Confirmation Threaten to Create a New Wave of Statelessness in Ukraine: A Preliminary Legal AnalysisUkraine’s ex-President Poroshenko accused of ‘treason’ and ‘financing terrorism’Fake ‘religious expert’ exposed in Russia’s ‘trial’ of 25 Crimean Tatar journalists and civic activists Moscow blocks OSCE monitors to increase secrecy about its war against Ukraine in Donbas A brief description of the KHPG strategic litigations in the first half of 2021Mother of slain journalist Pavel Sheremet: I don’t want innocent people to suffer for his murder Belarusian activist threatened with deportation from Ukraine for criticizing the police Legal Opinion on the political motives of the criminal prosecution and violations of human rights in criminal proceedings of Konstantin ZhevagoAntonenko released from custody with Ukraine’s Sheremet murder trial arousing ever more doubtsInterior Minister Avakov accused of manipulating public opinion over Ukraine’s most controversial trial 2020: There was no worse year in the realm of human rights after the Revolution of DignityA brief description of the KHPG strategic litigations in July–December 2020Expert opinion (Amicus Curiae) on the application and interpretation of the case-law of the European Court of Human Rights in criminal proceeding № 52017000000000361Russia launches dangerous new ‘foreign agent’ offensive against independent NGOs
• Topics / Politics and human rights 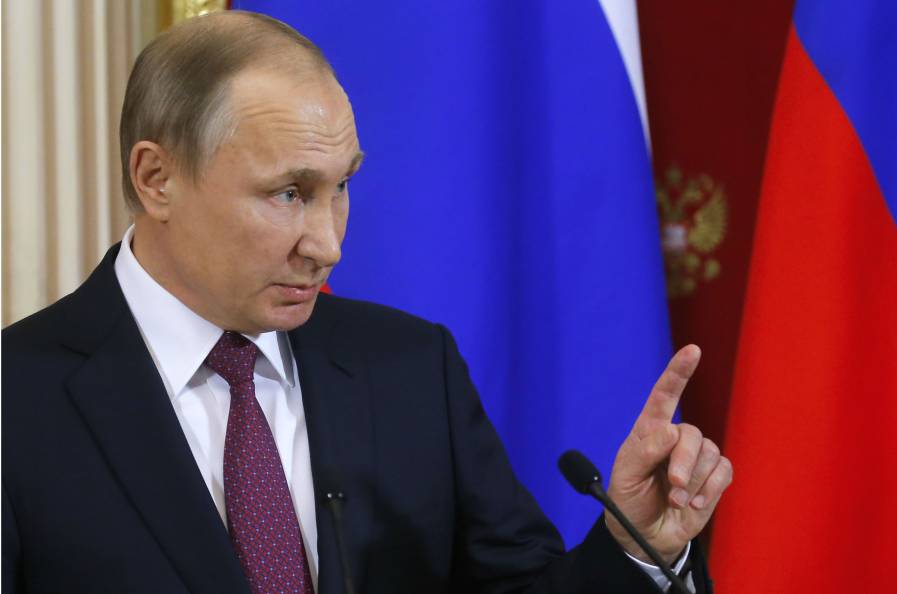 Russian President Vladimir Putin speaks during a news conference after a meeting with his Moldovan counterpart Igor Dodon at the Kremlin in Moscow, Russia, January 17, 2017. REUTERS/Sergei Ilnitsky/Pool

Security experts who follow the West’s responses to Russia’s meddling in its internal affairs—through cyber hacks, massive disinformation, corruption of Western leaders, and espionage—have good reason to be disappointed. With a few exceptions in the Baltic and Scandinavian countries, and recently in the Czech Republic, very few real counter-measures have been put into practice. Despite almost every Western intelligence agency urgently warning about the Russian threat, only a few Western leaders are ordering their security institutions to develop and implement robust strategies and policies against it.

We don’t live in an ideal world, but let’s think for a moment about the ideal reaction and how it might play out.

First, let’s really defend Ukraine against the Russian military. The American president should join with his European allies to declare in one strong voice that if the Kremlin doesn’t stop the fighting in eastern Ukraine, military action will follow, as will other steps. For example, the detailed identification of all Kremlin-linked financial assets (including the assets of Kremlin leaders’ relatives living in the West) should be put on Putin’s table with a clear message: if you don’t stop your aggression, this is what you and your people will lose.

Moscow has no justifiable explanation for its massive delivery of personnel, weaponry, intelligence, and artillery support to its proxies on Ukrainian soil. The West should support the Ukrainian army with modern weapons to give it a better chance of defending its homeland. Russia-backed and commanded militants would be given an ultimatum to surrender and return control over Ukrainian territory to the Ukrainian government, or face a full-scale offensive.

The West should make it clear to Russia that if it directly launches a major invasion into eastern Ukraine, it will face a Western military presence. Allied forces would be put on standby alert as the Ukrainian army, supported by its Western partners, retakes control over its land in eastern Ukraine. Moscow would fiercely protest, but history teaches us that when confronted with a dedicated unified front, it backs down.

Second, Western democracies must get serious about tackling the threat of massive disinformation. The influence of foreign powers—and hostile disinformation specifically—need to be established as a regular item on Western security agendas. Top policymakers should say that Russia’s behavior is unacceptable and that strong counter-measures will be taken. Each targeted country should set up specialized hybrid threat centers with at least thirty interagency security experts monitoring and analyzing disinformation operations against their own democracies.

Meanwhile, Western governments should be proposing tailored policy responses at the national level, from specific requests to their own intelligence agencies to strategic communications activities. Without a special team of full-time professionals to craft public policies on this threat, no real comprehensive counter-measures can be expected. Just as regular policemen aren’t able to fight organized crime, the current security paradigm isn’t sufficient to confront the Russian threat.

Third, national leaders need to finally make it clear to Federica Mogherini, the EU High Representative for Foreign and Security Policy, that when European leaders called for EU action against “ongoing Russian disinformation campaigns” in March 2015, they really meant it. If she keeps avoiding naming Russia as the source of hostile disinformation operations, she’s systematically neglecting a clear threat perceived by many EU member states that she represents. Moreover, the only real EU response to this threat—an eleven-man EEAS East STRATCOM Team (paid mainly by member states, not by the EU institution that barely tolerates it)—is absurdly understaffed. At the very least, the EEAS’ progress and achievements should be discussed at the EU’s Foreign Affairs Council on a quarterly basis. And when the European Parliament calls for its reinforcement, it needs to happen.

Fourth, Moscow’s Trojan horses need to be called out and challenged. If a powerful politician is simply repeating Moscow-disseminated lies, as Marine Le Pen does regarding Ukraine, he or she needs to be publicly confronted. If some national politicians systematically downplay Russia’s meddling into their own countries’ internal affairs, serious questions about those leaders’ loyalty should be raised. Their personal and financial connections to the Kremlin and its proxies should be carefully investigated; otherwise, many democracies would be left with leaders who are vulnerable to blackmail. That is why all financing of political affairs must be completely transparent.

Fifth, governments need to fund projects that expose disinformation and massively increase media literacy skills. Right now, virtually no funding is available in Europe for operational monitoring and the analysis of disinformation. When it does exist, it often comes from private foundations or a few American donors. The reason is a remarkably low level of understanding about how serious this threat is, as well as the issue’s sensitivity: donors are often afraid of angering Moscow and legal liability.

The EEAS East STRATCOM Team has already built a network of 400 volunteer researchers in thirty countries. Those experts report on disinformation on a weekly basis, and almost all do it for free. The volunteers are deeply determined, but serious research cannot be built without even minor financing. To understand how seriously institutions are taking the threat, look at the amount of money dedicated to countering it. In this, Europe is failing miserably. For starters, every concerned government should be dedicating five to twenty million Euro annually, depending on its size.

Sixth, we urgently need data. How many Germans believe the most common Kremlin narratives? What portion of French voters think Baltic countries are not worth defending and therefore when NATO Article 5 is activated, the French president shouldn’t send French troops to defend its allies? What are the country-specific vulnerabilities Russian intelligence is using to push through its foreign-policy objectives? How are national electorates shifting their views on key foreign-policy issues, especially since 2014 when the Kremlin launched most of its disinformation campaigns targeted at Western audiences?

We need answers to these questions. Comprehensive sociological research must be conducted, with national-security urgency, that includes a clear understanding of how nation-specific disinformation narratives are disseminated, and how are they successful. It is impossible to measure the direct impact, but it is possible to learn what portions of society believe which narratives, and why. Without knowing how many people subscribe to Kremlin narratives in most countries, Western institutions are practically blind. The West barely knows how to tailor its counter-policies, because most of the analytical work has not yet been started at the needed scale. Until now, most Western leaders didn’t care, and that has to change now.

Jakub Janda is head of the Kremlin Watch Program and deputy director at the European Values Think-Tank, based in Prague. In 2016, he was tasked by Czech security and intelligence institutions to consult on the “Influence of Foreign Powers” chapter within the Audit of National Security conducted by the Czech government.