Three years after the Revolution of Dignity: Why reforms are slowing, and how to prevent backtracking 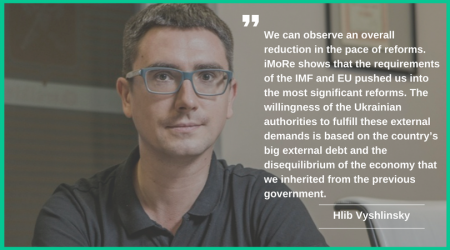 How the pace of reforms is changing?

In the first half of 2015 the VoxUkraine Index for Monitoring of Reforms (iMoRe) came in at +1.4 on a scale of -5 to +5. This was the period when the current program with IMF started and Ukraine’s economy was in ruins. Already in the second half of 2015, this figure dipped below +1.

A new government emerged in Ukraine in the first half of 2016. Actions required for a visa-free regime and cooperation with IMF were conducted. During this period, the iMoRe equaled 1 while in the second half of 2016 the Index fell again. During the first weeks of 2017, the index came in at 0, meaning there was no net forward progress on reform.

Therefore, we can observe an overall reduction in the pace of reforms. iMoRe shows that the requirements of the IMF and EU pushed us into the most significant reforms. The willingness of the Ukrainian authorities to fulfill these external demands is based on the country’s big external debt and the disequilibrium of the economy that we inherited from the previous government. These disequilibrium is a “double-edged sword”: it remains a mystery that without such urgent challenges would any positive structural changes have been undertaken at all?

What are the reasons for stalling of reforms?

Firstly, there is a total public distrust of political institutions. According to the latest data of the Democratic Initiatives Foundation, no Ukrainian politician has a balance between trust and distrust above minus 20 points. This is very bad news. It means that Ukrainian politicians do not have enough political capital to do something good for the country (as well as to do something bad).

Consequently, there are two options for current politicians: “take the money and run” (as Yanukovych did) or, conversely, do something and try to run for re-election on an honest platform of reform successes. However, there are restrictions: if a politician has such a low level of trust then he/she would need to make tremendous efforts in order to be able to sell the reforms which are necessary for society.

Between reformers and society lie (often in both senses of the word) interest groups which defend their private benefits. They “close the window of opportunities”. They must be pressured, but in order to do so it is necessary to have strong political capital that distrusted politicians lack.

A second structural barrier is the duality of power. It must be mentioned that because of the President’s control over law enforcement and the judicial system, he actually limits the government’s ability to improve the climate for investments and business. Economic policy, for which the government is responsible, is restrained with the high risks of investing in Ukraine because of corruption and unaccountable law enforcement agencies.

One more problem is the absence of a real coalition in the Verkhovna Rada. The most vital decisions are practically purchased by various political or financial resources. For instance, as was the case with the key decisions in order to renew the IMF program – the voting for the state budget 2017 in the dead of night. Such bargaining does not say anything good about the decision-making mechanism.

Improvements in public administration are almost entirely absent. We have not observed major changes in this direction yet. While there are some bright spots, the old civil service is successfully manging to remain entrenched.

The country is losing a critical number of reform-minded leaders. Many intelligent and active people left the government. Those were the personalities who at least created an impression that something was moving forward. There have to be success stories and strong leaders in order to develop support from the public and opinion leaders.

Which reforms could be considered sustainable?

Reforms are held back by interest groups which are capturing the state. As the recent Romanian experience of protests against the government’s attempts to weaken the fight against corruption shows, the role of society can be in assisting civic activists and reformers in the government to fight against powerful interest groups for the benefit of the country’s development and for improving the overall standard of living.

In Ukraine, reforms could be sustainable if they were conducted through the creation of independent structures which are supported by donors – in particular, reformist elements within the National Bank of Ukraine (NBU) and the National Anti-Corruption Bureau of Ukraine. It would not be possible to clean up the banking system without NBU independence. And again, the IMF stood behind this requirement. The public must itself support these reforms rather than steps just being taken to receive external support. The next important goal for the country is the independence of the courts.

The second option for sustainable reform is creation of strong communication support and competent teams. There are two examples: the ProZorro state procurement system and Naftogaz of Ukraine. People interested in stalling reforms which are being driven by these two high-performing teams realize that any attempts to derail progress will face vocal resistance from all sides.

Reforms are unsustainable inside siloed governing institutions without real changes in laws and boosting transparency. For example, The Ministry for Economic Development and Trade faces almost weekly scandals, for example, when on any request it stops foreign economic activity of operators on the liquid gas market, or if companies which import medications. Everyone understands these are machinations of corrupt interests. Since legislation was not changed the more progressive team left and the professionalism and energy of honest people was lost. Dishonest people got the opportunity to buy their way back in.

Another example of failure of reform is politicized institutions where stakeholders have strong influence. For instance, the State Property Fund of Ukraine. We do not observe any movement towards privatization. Any large entity has not been privatized for over three years. New institutions have been captured (Senior Public Service Commission, the National Agency for Prevention of Corruption) as their independence could not be ensured.

I would like to refer to EBRD Managing Director for Eastern Europe Francis Malige. In his opinion, in order to accelerate reforms there must be consensus between Ukrainian elites on the necessity of independent institutions and that nobody will capture these institutions. From the experience of the last three years we can say that without such a consensus we will not see significant reform progress.