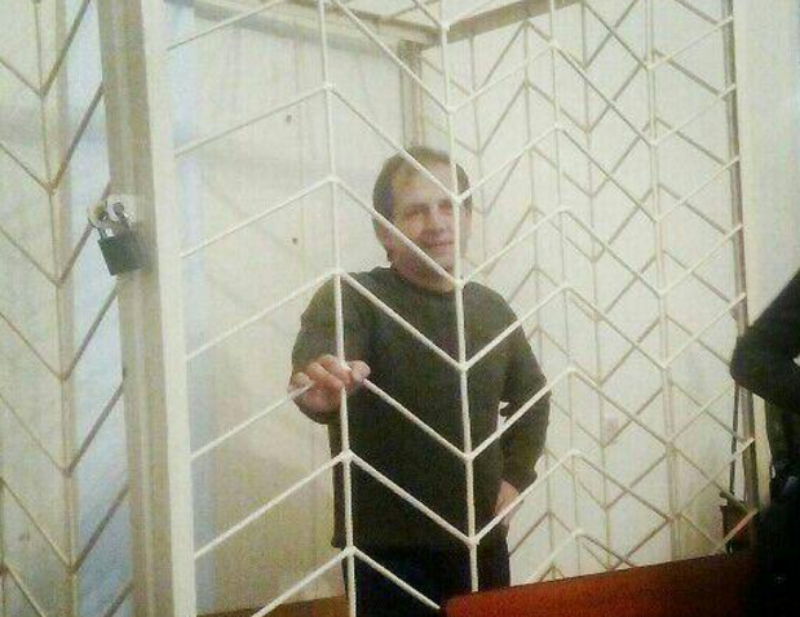 The trial in Russian-occupied Crimea has begun of Volodymyr Balukh, a Ukrainian from North Crimea whose latest arrest came just a week after he nailed a plaque to his home in honour of activists slain during Euromaidan.  The case has reached the court with suspicious speed given that the only thing that is entirely clear-cut is the political motivation behind the charges.  This has already prompted the renowned Memorial Human Rights Centre to declare the Crimean farmer a political prisoner and he is one of the prisoners whose release the European Parliament demanded in their March 16 resolution.

Balukh was arrested on December 8, 2016, after the FSB carried out searches of his home and that of his elderly mother in the same North Crimean village.  The FSB claimed to have found 90 bullets and several trotyl explosive devices in Balukh’s attic. There was nothing to link Balukh with any act of violence, and the Ukrainian activist had every reason to expect FSB searches.  These had taken place in the past, and were particularly likely given that on Nov 29 Balukh had nailed the plaque renaming his home No. 18 “Heroes of Nebesna Sotnya St’ (Nebesna Sotnya, or Heavenly Hundred refers to the over 100 Maidan activists who were gunned down).  There had been demands from the head of the local council for the sign to be removed which Balukh had ignored.

The first hearing took place on March 16 at the Razdolne District Court, The Crimean Human Rights Group reports that the testimony was heard of four supposed witnesses, as presented by the prosecution -  a neighbour from the village, Balukh’s wife Natalya and two police officers.

Balukh was held in a cage during the hearing, with around 15 court and convoy guards present in what is doubtless a small courtroom.

There have been flagrant violations of Balukh’s procedural rights from the beginning, and this ‘court hearing’ was no exception.  Balukh’s lawyer had asked to be able to speak with Balukh before the hearing and pass him documents.  The guard refused to pass the papers to him, and judge Maria Berditskaya tried to read them aloud, despite this being confidential material between a lawyer and his client.  She only stopped when the lawyer made a formal complaint about the breach of his client’s right to defence, yet still read them herself before allowing them to be handed to Balukh.

The choice of ‘prosecution witnesses’ was indicative of the nature of this trial.  The first person is somebody from the same village who spoke highly of Balukh and denied the claim that the latter knows how to use firearms.

The next was Balukh’s wife who said that no less than 16 people had taken part in the search, and had wandered around their home without either her or her husband.

Two Razdolne police officers were questioned.  They said that the FSB had initiated the search and drawn up the protocols for it.   Alexandra Krylenkova explains that the first officer was asked why, during the search, he had ‘guarded’ Balukh, thus preventing the latter from following the ‘search’.  He claimed that this was because “a person in such a state is in stress and could jump from the window”.   He had then, he said, been called to look at the supposedly ‘found’ ammunition, etc., though mistakenly named the calibre.

One quite bizarre move was the judge’s order to bring Balukh’s son, who is currently in South America, to the court by force for the next hearing, scheduled for 20 March.  This could be a delaying tactic, yet there is every sign that the occupation regime want to ‘convict’ and sentence Balukh soon, and there is no rational reason for summonsing his son.

Balukh’s wife believes that somebody was in her home while she was at the court hearing.  She asked the local police duty officer to come and check, but he refused.

The grounds for concluding that Balukh is facing persecution for his pro-Ukrainian position are compelling.  Since December 2013, the only time the Ukrainian flag did not fly above his home was when the FSB already under Russian occupation pulled it down.  He has rejected Russian citizenship.

Now Balukh is facing a potential 4-year prison sentence (under Article 222 § 1 of the Russian criminal code.)