13-year sentence against Belarusian investigative journalist who helped expose crimes against Ukraine Belarusian rail partisans who helped save Kyiv from the Russian invaders threatened with death sentences “We’re not celebrating today” – digest of Russian protests (early June 2022)Ukrainian Police Open Murder Case After Finding Missing Belarusian Activist "Hanged" In KyivCzech Republic passes record 21-year sentence for terrorism in militant-controlled Ukraine Abducted journalist’s life is in danger in Belarus. Not only his while Lukashenko and Putin get away with terrorismBelarus KGB arrest journalist who identified the Ukrainian Berkut helping Lukashenka regime Belarusian Journalists Handed "Absurd" Prison Sentences For Live Coverage Of Anti-Government RallyFake ‘Ukrainian fascist’ arrested and charged with working for Russia and its proxy Luhansk ‘republic’ Lukashenko plotted to kill Sheremet yet Ukraine has charged people with no motive for his murder More Than 1,000 Detained In Belarus As Protesters Face Tear Gas, Stun Grenades, BeatingsBelarus: Savage attack and possible 3-year sentences against journalists reporting March against TerrorBelarusian Police Detain More Than 90 As Protests Enter 11th WeekHow post-election protests are creating a new Belarus’We’re Belarusians, Not A Russian Region’: Protests Take Aim At KremlinLukashenko regime’s savagery may be backfiring in BelarusBelarusian Opposition Presents Broadest Challenge Yet To Strongman Lukashenka After Disputed ElectionBelarus: Peaceful protester killed in violent crackdown after claimed Lukashenko victoryWhy were Wagner fighters from Russia seized in Belarus and can Ukraine get them extradited?AI condemns purge on bloggers & activists ahead of presidential elections in Belarus
• Topics / News from the CIS countries

Belarus crackdown: more than 200 arrested or detained in two weeks 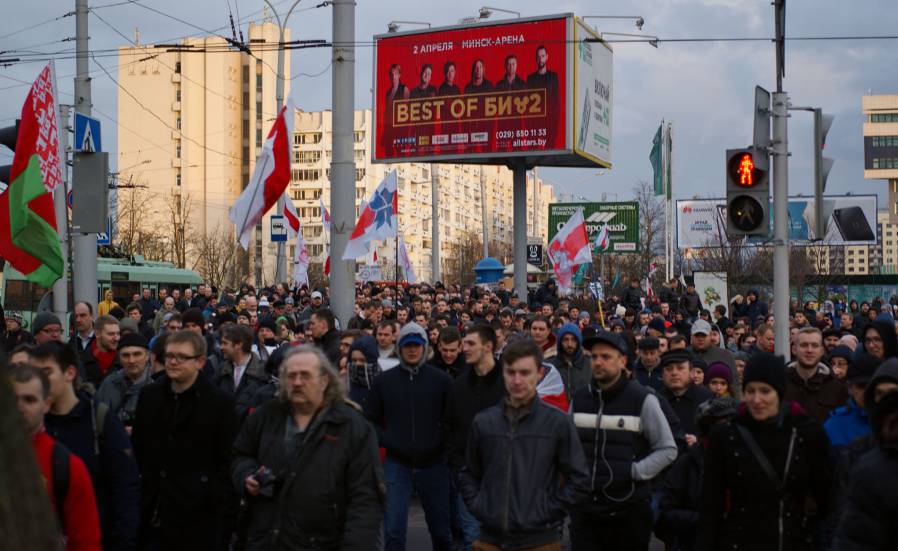 One year after the EU lifted sanctions against Belarus, the government is resorting to harsh and violent repression to break the most massive protests seen since December 2010 Presidential election.  The Belarusian Viasna Human Rights Centre and FIDH [the International Federation for Human Rights] believe that the new repression against peaceful protesters confirms the absence of political change.

A number of other opposition and civic activists were for their part arrested prior to protests in order to prevent them from participating in the demonstrations. For example, on 12 March the chairperson of the Orša United Civic Plateform (UCP) party Valiantsina Ihnatsenka was threatened with arrest and forced to stay at home. Another UCP activist from Mahiliau, Vladimir Shantsev, was preventively arrested ahead of the 15 March protests while UCP activist in the city of Homiel, Vladimir Nepomniashikh, was arrested the morning of 15 March.

Despite these detentions, on 15 March, several thousands of citizens took to the streets in Minsk, Mahiliau, Hrodna, Vitsebsk and other cities. At least 70 protesters were detained on 15 March and 54 were sentenced to up to 15 days in detention the following day. Most people were arbitrarily arrested and detained on their way to the demonstrations and on non-related charges: asocial behavior, swearing in a public place, etc. Others were picked up and detained upon returning home after the demonstrations, either on the streets nearby or in public transport on their way home. The arrests were carried out by unknown men in civilian clothing and people were taken to police stations in unmarked vehicles. Many, including women and minors, were violently beaten. Two independent online media websites charter97 and Belarusian Partisan, operating from abroad, were blocked during the demonstration.

Police searches were carried out in several cities targeting the offices of the opposition parties and movements, but also private houses and flats.

Prior to the 15 March 15 , FIDH member organisation HRC "Viasna" reported the arrests and harassment of 126 persons, sanctioned for exercising their right to peaceful assembly. One person was placed in a psychiatric facility for several days and later released.

According to the Belarusian Association of Journalists (BAJ), 18 journalists and bloggers were among those detained on 12 March alone. They were arrested while covering mass protests in several cities. Police officers used different pretexts to hinder journalists’ work: identity checks, fining for parking, suspecting of car jacking, disobeying the police, and violating media related legislation. It is clear that the objective was to prevent journalists from obtaining and disseminating information about the ongoing events. BAJ particularly underlined that impeding media work that particular day had been obviously coordinated by the authorities. Additionally, two days earlier in Babruysk, 155 copies of Novy Chas newspaper were confiscated during a search of civil activists’ offices. Two journalists were later sentenced to heavy fines, three were condemned to up to 15 days of administrative detention and four are still awaiting trial.

Today,17 March 2017, two human rights defenders, Leanid Sudalenka and Anatolii Paplavni, both members of the Gomel chapter of the Human Rights Centre "Viasna" are being tried for «participation in unauthorised protests». Leanid Sudalenka is the person who submitted over 200 citizens’ complaints against the provisions of the Decree No. 3, which is believed to be at the origin of the mass protests. If found guilty , both face an administrative fine of up to 350 euros or risk being placed in administrative detention for up to 15 days.

In addition to the repression following the mass protests against the «unemployment fee», others have been detained for their actions against the construction of the commercial center near the Kyrapaty memorial complex. Former political prisoner and leader of youth movement "Molodoi Front" Dzmitry Dashkevich was sentenced to three days of administrative arrest on 10 March 2017 for participating in unauthorised mass events. His detention relates to protests that erupted on 23 February 2017 against the construction of a business centre next to the site of execution and burial of thousands of victims of Stalin’s political repression. Authorities eventually suspended the construction. Furthermore, another civic activist, Siarhei Palchevskii, was sentenced to 3 days of administrative detention on 7 March 2017.

"The president of Belarus suspended the controversial Decree, and the construction of the business centre against a backdrop of mass protests: the people’s voice, in a way, was heard. However, the dissent and freedom of the media are no more tolerated in 2017 than in 2010 when the sanctions were imposed on Belarus for its repression against the civil society. The regime kept its highly repressive nature intact while the EU sanctions were lifted without clear proof of any systemic and systematic changes,"Dimitris Christopoulos, FIDH President, said.

On arbitrary “administrative” detention in Belarus and conditions of detention :
“Arbitrary Preventive Detention of Activists in Belarus”
https://fidh.org/en/region/europe-central-asia/belarus/16113-release-of-a-report-arbitrary-preventive-detention-of-activists-in-belarus

HRC Viasna: Report on the Results of Monitoring Prison Conditions in Belarus, 2013,
http://spring96.org/files/book/en/2013_prison_conditions_en.pdf

FIDH – HRC Viasna: Conditions of Detention in the Republic of Belarus, 2008,
http://fidh.org/IMG/pdf/Belarus500ang2008.pdf

FIDH: Belarus. Restrictions on the Political and Civil Rights of Citizens Following the 2012 Presidential Election, 2011, http://fidh.org/IMG/pdf/rapport_Belarus_En_web.pdf

On forced labor practices and the pervasive violation of workers’ rights in Belarus:

Forced Labor and the Pervasive Violation of Workers’ Rights in Belarus:
https://fidh.org/en/region/europe-central-asia/belarus/forced-labor-and-the-pervasive-violation-of-workers-rights-in-belarus