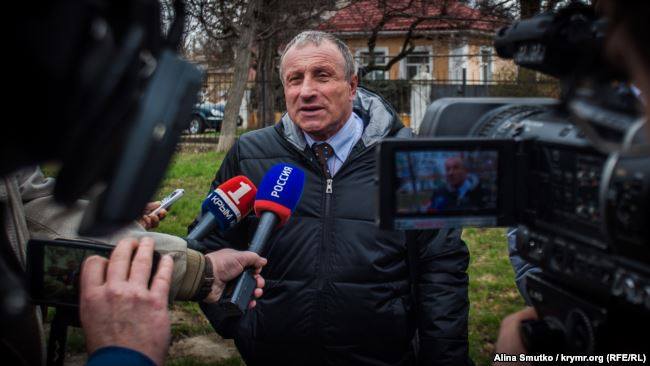 The first hearing into Russia’s trial in occupied Crimea of journalist Mykola Semena ended shortly after beginning on Monday, March 20, with the prosecution calling the defence ‘capricious’ and their demand for open hearings ‘contempt of court’.  Since Semena is already being tried under Russian law for exercising a right guaranteed by Russia’s Constitution, the judge did finally refrain from denying him another right enshrined in that same document, and the hearing was adjourned until April 3.

The 67-year-old journalist is on trial essentially for expressing the same position as that taken by the United Nations, the EU, the Council of Europe and all democratic countries.  Semena is facing a mandatory 5-year sentence for an article entitled “The Blockade – a necessary first step to the liberation of Crimea”.  The civic blockade in question was peaceful and there is not one word in the text calling for violence, yet Russia is claiming that the journalist was guilty of “calls to action aimed at violating the territorial integrity of the Russian Federation”.  The charges are under Article 280.1 of Russia’s criminal code, a new norm introduced soon after Russia’s annexation of Crimea which has already been used to imprison people for criticizing the land-grab.

Semena denies the charges, with he and his lawyers refer to his right to freedom of expression.  Unsurprisingly, this position is upheld by all international media organizations, the OSCE, European Parliament, EU and other bodies who have called on Russia to withdraw the prosecution.

Russia has refused to back down, and the investigator has already seriously endangered Semena’s health by refusing to allow him to seek urgently needed medical treatment in Kyiv.

The hearing scheduled on March 20 was the first on the actual charges, with the earlier preliminary hearing held (as is always the case) behind closed doors.  This time there were several journalists from TV and information agencies, as well as people who had come to support Semena and follow the proceedings.

Alexander Popkov, one of the lawyers representing Semena, reports that a tiny little office had been allocated for the hearing with this scarcely big enough for Semena and his two lawyers (Popkov and Emil Kurbedinov).  They were told that any dictaphones or telephones would be taken away, and there was room at the one narrow desk only if the three of them squeezed up together.  There was not enough room, however, for Semena to have all his papers in front of him.

The judge – Nadiya Shkolnaya – claimed that the journalists had not applied for permission to record the proceedings properly, with that seemingly used as a general excuse to exclude them.

Popkov asked that the hearing be moved to another courtroom.  There were two other rooms free, suggesting that the choice had been quite deliberate and designed at keeping this ‘trial’ as secret as possible.  Popkov stressed that hearings must be open and accessible, especially in such a high-profile trial.

The de facto prosecutor Svetlana Udinskaya objected, calling the application “personal caprice” and even accusing the defence of demonstrating contempt of court by arguing.  She apparently even said that they’d be asking for "coffee in bed next time".

Shkolnaya had also initially objected, claiming that all requirements had been met for holding the hearing.  She did, however, adjourn the hearing until April 3.  It remains to be seen what premises will be allocated on that occasion.

The prosecution had planned to bring in four ‘witnesses’ on Monday.  According to Semena, these were the formal witnesses present during the viewing of sites where his material was published, and their testimony will only be to confirm this.  The prosecution is also planning to call at least one pro-Russian journalist – Sergei Meshkovoi - whose testimony will seemingly concentrate on criticism of Semena’s pro-Ukrainian position.

The FSB carried out searches of the homes of Semena and six other journalists on April 19, 2016, and soon afterwards brought the above-mentioned charges against Semena.  The case is chilling both because of the grotesque nature of the charges against a journalist for expressing a critical opinion, and because of the extreme level of surveillance that he was under.  It is clear from the array of screenshots from his computer, while he was writing the article, that the FSB were following his every movement on the computer.

The number of constitutional rights flouted is formidable.  In Semena’s case, as in those of Ukrainian filmmaker Oleg Sentsov and many other political prisoners, the presumption of innocence has been totally abandoned, and within months of the charges being laid, he had been added to Russia’s Federal ‘List of Terrorists and Extremists’.

Semena said on Monday that he was ready for the worst scenario – namely the 5-year compulsory prison sentence envisaged by the law.  All trials under 280.1 have been political and this one seems clearly aimed at sending a menacing message to any journalists in occupied Crimea – to leave or adopt a totally conformist position.