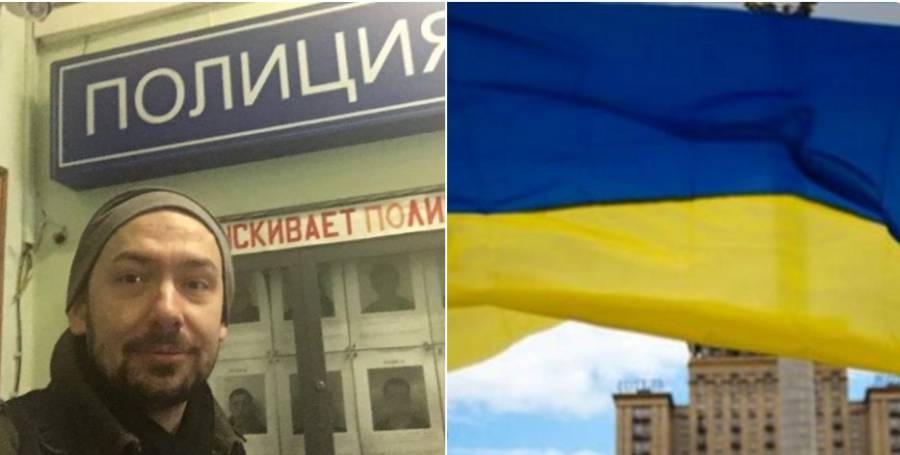 Two Ukrainian journalists were held in a Moscow police station for around 3 hours on Tuesday evening, together with the Russian postgraduate student beaten by the FSB for waving a Ukrainian flag during state-organized festivities marking the anniversary of Russia’s annexation of Crimea.  Each was questioned separately before finally being released with the police trying to claim that they had been holding an ‘unauthorized meeting’ and chanting slogans.

Roman Tsymbalyuk, UNIAN correspondent and 1 + 1 cameraman Nikita Borodin had just taken an interview of Zakhar Sarapulov when the police turned up and took their papers away.  Tsymbalyuk reported first that they were awaiting the arrival of the head of the Moscow State University police, then that they were being taken to the police station.  They clearly held them there for up to 2 hours before any questioning.

The police demanded that they provide ‘explanations’.  Tsymbalyuk did so, but refused to give this in writing, citing Article 51 of Russia’s Constitution.  He wrote instead that they should follow the UNIAN information agency and watch TV ‘1 + 1”.

Tsymbalyuk has since told UNIAN colleagues that after they recorded their interview with Sarapulov, the latter took out his Ukrainian flag which the journalists also filmed.  It was at that point that the police – who had doubtless been watching – drove up and accused them of holding an unsanctioned meeting, slogans and all.  Tsymbalyuk points out that the detention was totally unwarranted. The men had journalist accreditation and were filming in a public place.

Ukraine’s consul became involved, calling the journalists’ detention Russian provocation.   They were released within 3 hours, without any protocols being drawn up.

Tsymbalyuk is best known for his hard-hitting questions to Russian President Vladimir Putin about Russia’s aggression and ongoing imprisonment of Ukrainian political prisoners.  His treatment on Tuesday evening was, he says, a first for him.

Sarapulov’s savage treatment from Russia’s security service [FSB] after waving the Ukrainian flag had already been widely reported in the Russian and Ukrainian media.   The earlier reports, first in MediaZona, had not given his full name, and his friend, who also provided information about the extraordinary FSB behaviour wanted to remain anonymous.

They reported that Sarapulov had made the Ukrainian flag himself and waved it from the window of his hostel room.  He earlier denied any political motive saying that he had simply wanted to draw attention to the dire, cockroach-infested conditions in the hostel and protest at the squandering of public funding on a festival to mark Russia’s annexation of Crimea.

In fact, a group of university students and graduates had issued a press statement on the eve of the anniversary on March 18, promising pickets in protest.  They too asserted that they were objecting primarily to the wasting of public funding.

Sarapulov moved onto the landing so that his flag would be more visible from the festivities, and it was there that he was stopped by a security officer from the university, after which a police officer appeared together with three men in plain clothes who said that they were from the FSB.  He was forcibly taken to his room which they searched, removing his camera, telephone and laptop.

The police officer left, after which the three apparent FSB officers began an interrogation with the use of force.  They avoided punching him, but slapped him around the head and also poked him in the torso with a sharpened mop handle, which left cuts and abrasions.

Sarapulov and his friend say that the FSB officers found nothing of interest in the laptop and camera.  After grilling him for over two hours, they forced him to write a note saying that the “agrees to work as an informer for the FSB and ‘Centre for Countering Extremism’, with the code name ‘postgrad’.

The FSB left and three police officers turned up and forced him to write on a police protocol that he had waved the flag and used foul languages. He was not given a copy of the protocol, only of a receipt that he had paid a fine for petty hooliganism.

Sarapulov ensured that the injuries were recorded the following day, and on March 21 he sought assistance from the Committee for the Prevention of Torture.  He told MediaZona that the men who beat him looked like FSB officer Andrei Fedorov and an officer from the so-called Centre for Countering Extremism – Alexei Okopnoy.

As reported, the Russian authorities organized expensive and elaborate festivities both in Russian-occupied Crimea and in Russia for the third anniversary of Russia’s annexation of Crimea.   There were pickets in protest and solidarity with Crimean Tatar and other Ukrainian victims of annexation in both Moscow and St Petersburg.  It is also known that public sector workers and university students were essentially forced to attend.

It has become dangerous in Russia and occupied Crimea to openly express criticism of Russia’s land-grab, with a number of Ukrainians and Russians either already imprisoned or facing a 5-year prison sentence.  After invading and annexing Crimea, Russia is now prosecuting critics by claiming that their words – on social networks, interviews, etc., constitute ‘public calls to action aimed at violating Russia’s territorial integrity’.