Why a Trump Victory Would Put Ukraine in Danger. In Trump’s Own WordsPaul Manafort Is the Tip of the IcebergCourt upholds right to see constitutional submission regarding language lawRight to know about controversial Presidential residence to be defended in StrasbourgSo much for the Public Information Act, Next step StrasbourgDeath threats against website journalist echo Georgiy Gongadze murderInterrogation of journalist over Yushchenko poisoning excessive
• Topics / Politics and human rights 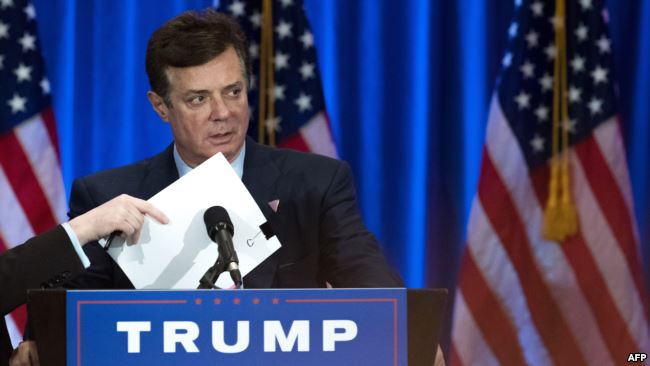 The documents, made public by lawmaker Serhiy Leshchenko at a press conference in Kyiv on March 21, include an invoice that bears the name of Manafort’s Virginia-based consulting company, a blue seal, and what appears to be his signature.

Initially described in a report published by The New York Times on March 20, the document seems to show that $750,000 was laundered through an offshore account and disguised as payment for computers.

Leshchenko called on Ukrainian and U.S. law-enforcement agencies to investigate the payment.

"This is money stolen from Ukrainian citizens and has been paid to Manafort for [his work] with our former corrupt president," Leshchenko charged in a brief interview with RFE/RL on March 21, speaking in English. "This corruption must be exposed."

The authenticity of the invoice and other documents Leshchenko presented could not be confirmed.


He said he received the invoice, which billed a Belize-based company called Neocom Systems Limited $750,000 for the sale of 501 computers, in January from IT company employees who found it in a safe after they rented central Kyiv office space that had been vacated by Manafort in 2014.

Leshchenko said he released the documents only now because it took time to "verify" them. He said he did so by comparing Manafort’s signature on his 1996 company registration documents with the signature on the invoice.

"It is an identical signature to the one on this contract," Leschenko said.

Manafort has claimed Leshchenko tried to blackmail him via e-mail last summer when he came in possession of a secret "black ledger" kept by Yanukovych’s Party of Regions showing entries worth $12.7 million from an alleged slush fund set aside for his services. Leshchenko denies the claim, saying that the threatening e-mail -- which was made public by a murky hacker website -- is a fake.

Leshchenko showed that the alleged $750,000 payment corresponds to one of 22 entries in the "black ledger."

Manafort did not respond to a text message from RFE/RL requesting comment, but he denied Leshchenko’s latest allegations to The New York Times.

Leschenko’s news conference came hours after a March 20 hearing by the Intelligence Committee in the U.S. House of Representatives in which FBI Director James Comey was asked about Manafort’s work in Ukraine and allegations of contacts between Manafort and Russian intelligence officials.

Comey declined to talk specifically about Manafort and others with alleged ties to Russia, but he did take the rare step of confirming that the FBI is investigating communications between Russian officials and associates of Trump.

Manafort resigned from Trump’s campaign last summer following allegations of contacts with Russian intelligence officials, and media reports have indicated that the FBI is investigating those allegations. He said previously that he has never had contact with Russian agents, at least not knowingly.

"It’s not like these people wear badges that say, ’I’m a Russian intelligence officer,’" he said in February.

The White House tried to distance itself from Manafort as the congressional hearing was still under way on March 20, with spokesman Sean Spicer describing the former campaign chairman as having "played a very limited role for a very limited time."

Trump hired Manafort to head his delegate efforts for his Republican primary campaign on March 28 last year and kept him on staff until he resigned on August 19, after the disclosure of the "black ledger."

Before he worked for Trump, Manafort worked for more than a decade for Russia-friendly political parties and oligarchs in Ukraine.

Yanukovych fled to Russia after being pushed from power in February 2014 by pro-Western protesters incensed at his decision to abandon plans for a pact tightening Ukraine’s ties with the European Union. Leshchenko was a prominent figure in the Euromaidan protests and was elected to parliament later in 2014.