Open Letter to the President of the Republic of Belarus, Alexander Lukashenka 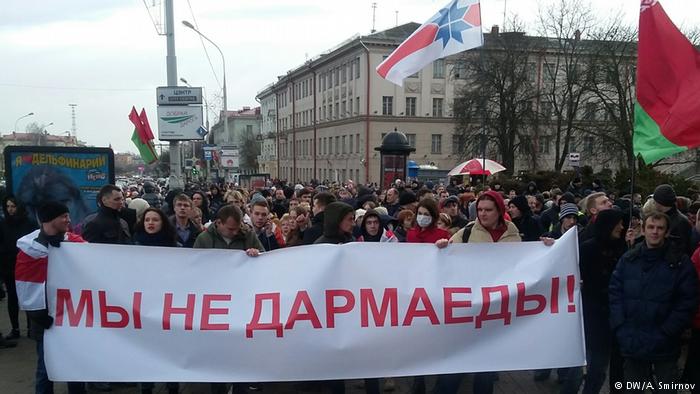 Most of the detentions and harassment are linked to participation in peaceful protests demanding the cancellation of Presidential Decree No. 3, the so-called “social parasite” legislation, which imposes a tax on unemployed people in Belarus. Decree No. 3 obligates citizens to work a specific number of days or pay a special duty to the State under threat of arrest. This is contrary to Art. 41 of the Belarusian Constitution and violates international human rights law.

According to reports from Belarusian and international human rights organizations, as of 22 March 2017 more than 250 people have been detained since 3 March 2017, including at least 31 journalists. At least 110 people have been sentenced to 3-15 days of administrative arrest. Many of them remain in detention, while others have been subject to different forms of harassment.

e strongly condemn the fact that several detentions of peaceful protesters at different places across Belarus have been carried out with the excessive use of force by Belarusian security officers.

Several Belarusian organizations have announced a demonstration that will take place in Minsk and in other cities in Belarus on 25 March 2017. We are deeply concerned about the physical and psychological integrity of the participants of these protest marches.

As the president of Belarus we urge you:

- to respect the right to peaceful assembly and expression

- to ensure that there are no obstructions to the exercising of these rights in Belarus, including in relation to the planned demonstration on 25 March 2017 in Minsk and in other cities across the country

- to ensure that journalists are able to fully exercise their professional duties, including during  peaceful demonstrations

- to immediately and unconditionally release all protesters, journalists, human rights defenders, civil society activists and opposition members who have been detained in connection with the current wave of demonstrations solely for peacefully exercising their right to freedom of assembly and expression

- to immediately stop the persecution, harassment and intimidation of those who exercise their right to freedom of assembly, expression and association and ensure these rights to all Belarusian citizens

- to abolish Presidential Decree No. 3 since it violates international human rights law

Center for the Development of Democracy and Human Rights (Russia)

Kazakhstan Interantional Bureau for Human Rights and the Rule of Law