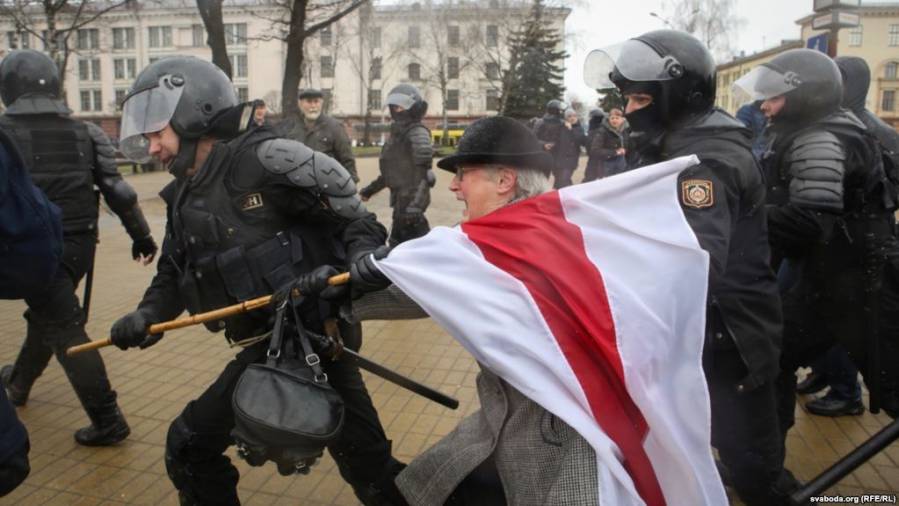 If the Belarusian authorities hoped to prevent their crushing of Freedom Day protests being monitored by detaining 57 international observers, they should have used less gratuitous violence against both the monitors and hundreds of other peaceful protesters.  Viasna reports that hundreds of riot police demonstrated extreme brutality, with water cannons and military vehicles used, and many of the police armed.  All of this just over a year after the EU removed sanctions against the dictatorial regime of Alexander Lukashenka.   Even before the violence on March 25, human rights groups were warning that nothing had really changed in what had simply stopped being referred to so often as Europe’s last dictatorship.

The arrests and harassment of activists, journalists and others began early in March in response to mounting protests demanding that the President revoke a decree imposing a tax, payable on threat of arrest, on people who are unemployed or do not work a stipulated number of hours.

Calls from the international community to avoid a crackdown were totally ignored.  Earlier on Saturday, 57 international observers, including Paulina Brodik, a Belarusian living in Ukraine, reported that they had also been detained at the Viasna office.  OMON riot police burst in and forced the observers to lie face down on the floor.  They were all taken to the police station and held in a sports hall.  The police officer who had been in charge of the detentions, but never identified himself, claimed that the activists were accused of “banditry and hooliganism”.

The Head of Viasna and former political prisoner Ales Bialiatski disappeared for well over an hour.  It turned out that he had been held to draw up detention protocols. The first activists were released about 15.00, and by evening all had been freed, however Alexei Loiko was taken to hospital after the beating he received from OMON officers.

At an emergency press conference called in Kyiv after the international observers were detained, Oleksandra Delemenchuk, representing the Ukrainian Helsinki Human Rights Union and Civic Solidarity Platform reported that 250 people had now been jailed for up to 10 days on administrative charges, with 26 people detained on under articles of the criminal code.

Viasna reported in the evening that around 700 people had been detained.  Amnesty International’s monitors spoke of seeing dozens of peaceful protesters arrested in Minsk alone, as well as excessive use of force by the police.  They had not seen any acts of violence from protesters.  Denis Krivosheev, Deputy Director for Europe and Central Asia said that Freedom Day had demonstrated more than ever “how little genuine freedom the people of Belarus have. We have seen peaceful protesters viciously beaten on the streets of Minsk today and an elderly woman knocked to the ground by riot police,”.

None of this, unfortunately, is unexpected.  Back in February, Civil Rights Defenders published a report entitled  “Dictatorship no more? EU Sanctions Lifted at the Expense of Civil and Political Rights in Belarus”.

The report notes that the EU cited the fact that the so-called elections in 2015 had been peaceful.  In comparison with the violence and arrests of opposition candidates and human rights defenders in 2010, the 2015 elections seemed an improvement, however Civil Rights Defenders believe this “was first and foremost a consequence of the brutal repression of protests against the rigged presidential election in December 2010”.

There have in fact been no free and fair elections under Lukashenka, and any improvements have been minor.

‘Unregistered’ NGOs are criminalized under Article 193.1 of the Criminal Code, and it is generally impossible for human rights organisations, political parties and others who are critical of the regime to obtain official registration.

There are no improvements on press freedom with various measures to crush it applied: from distribution bans and politicised prosecution of journalists to the recent arrests and prison sentences.

While at least prior to March 25, the number of actual arrests of opposition leaders and civic activists had fallen, there had been a steep increase in the use of extortionately large fines for organizing // taking part in public meetings.  Viasna recorded 484 such cases in 2016, which the Civil Rights Defenders say was seven times higher than previous years.

There has also been no moratorium on the death penalty.

In their statement on March 24, entitled ‘Repression returning to Belarus’, prominent Belarusian figures, including former political prisoner and Head of Viasna, Ales Bialiatski, addressed a number of demands to the EU aimed at putting pressure on Belarus to stop its repressive ways.  This, they stressed, is in order “to change the human rights situation in Belarus, while also regaining the trust of Belarusian civil society in the EU as a defender of human rights”