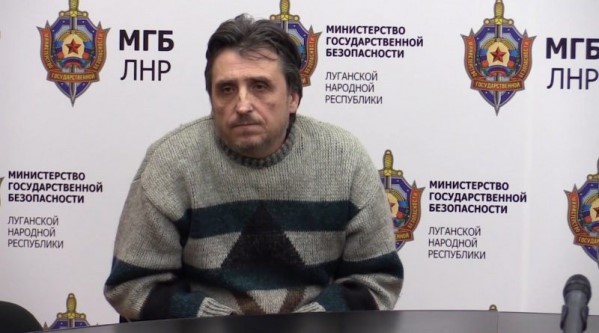 53-year-old Hennady Benitsky has been released several months after being seized by militants from the so-called ‘Luhansk people’s republic’ [LNR].  The Luhansk blogger was accused of ‘extremism’ and Benitsky himself says that the criminal case against him has not been terminated.  There had already been a report that Benitsky had been released, but the blogger himself has now confirmed that he was freed on March 16.   Edward Nedelyaev, who was arrested earlier, remains in militant custody, as do others seized for a pro-Ukrainian position and critical comments.

The so-called ‘LNR ministry of state security’ reported Benitsky’s ‘arrest’ on Dec 26, 2016, however his last post had been dated 30 November, and it is likely he was seized soon after that.   The militants themselves reported that he had been seized on the basis of denunciations (which they termed ‘information received from citizens of the republic’ and by looking at the contacts of Edward Nedelyaev.

The militants accused Benitsky of ‘circulating extremist material’ on Facebook, including instructions on how not to fall into the militants’ clutches.  He was alleged to have “spread extremist material containing negative information dishonouring citizens of the Republic, and also publication of an offensive nature about civic organizations, state structures and LNR executive bodies, including the head of the Republic”.  This was supposed to constitute ’inciting enmity on national and social grounds’.  In fact, he appears to have most often written about day-to-day life in Luhansk, though he did express strong views, including criticism of the current ‘LNR leader’ Igor Plotnitsky.

There were two final posts on Nov 30, 2016 – one about life in ‘LNR’ and the other reporting Nedelyaev’s arrest.

Aping Russia’s FSB, the militants also produce videoed ‘confessions’ from men held totally under their control.  Benitsky was shown in one saying that he had been contacted several times by the Ukrainian and Russian media for information about life in Luhansk, and that he had spoken with a journalist in Kyiv, not realizing this was being taped.  He suggested that he might also have been contacted by SBU officers asking him to take photos of various places in the city.  He said he had not paid any attention and had deleted the post.

There is no sign that the militants are planning to release Nedelyaev or others.

Nedelyaev, who writes as Edward Ned, was also taken prisoner with the same claim that he was circulating ‘extremist material’.  Soon afterwards,  on a video shown on Nov 30, 2016, he ‘confessed’ to spying and said he “had planned to become a partisan and help in returning Luhansk to Ukrainian jurisdiction”.  He also spoke of being connected to the Ukrainian Aidar Battalion.

There are no grounds for believing that Nedelyaev has a proper lawyer, with the same true of the two young Zarya football fans Vlad Ovcharenko and Artem Akhmerov seized on Oct 10, 2016 and accused of ‘state treason’