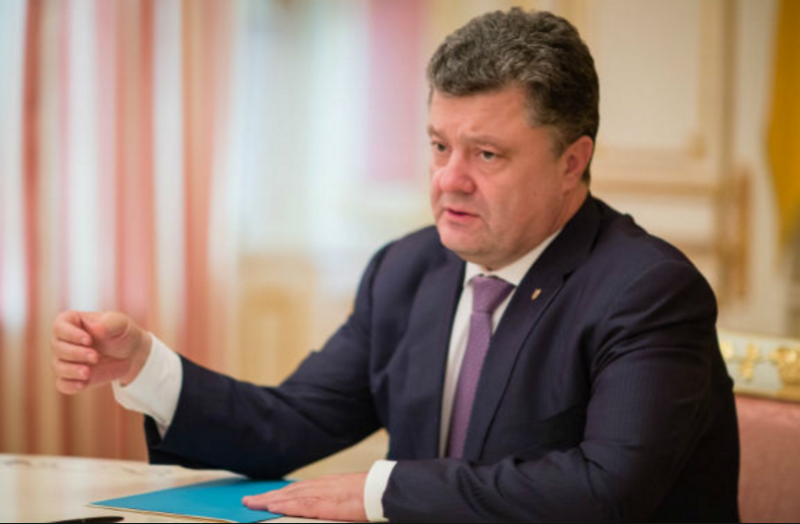 Ukraine’s President Petro Poroshenko has ignored calls from most major human rights and civic organizations and signed into law a dangerous bill which could be used to put pressure on NGOs, investigative journalists or activists, especially those most actively seeking to expose and eradicate corruption. He has in short allowed a law which his predecessor Viktor Yanukovych, now in hiding in Russia, would be proud of.

Poroshenko told representatives of civil society on March 27 that he had to sign the bill because of other parts of it affecting military servicemen, but promised to set up a working group to deal with the controversial amendments.  Such statements have been made before, and do not justify passing a bill that contains a dangerously vague and flawed norm.

Law No. 6172 on amendments to the Law on Preventing Corruption certainly waives any requirement for most military personnel to fill in electronic income declarations, but then makes it mandatory for civic activists, investigative journalists, etc. engaged in combatting corruption to provide such declarations.  As if that were not bad enough, the wording is so vague as to make selective application virtually inevitable, something the Ukrainian Helsinki Human Rights Union [UHHRU], Kharkiv Human Rights Group and other NGOs suspect is done quite deliberately.

The requirement to fill in electronic declarations has now been extended to individuals who “receive money or assets while carrying out programs or projects of technical or other aid, including irrevocable aid, on countering or preventing corruption (whether directly or through third parties or in any other way envisaged by the relevant program or project. “.  The list in full extends the need to provide such declarations to all civic organizations engaged in the same activities.  Some of the activities are clearly specified, for example, preparing proposals for anti-corruption policy in Ukraine. Others, however, are woolly and suspiciously all-purpose, covering anybody or any NGO “engaging in activities linked with prevention and countering of corruption”.

The UHHRU appeal points out that this is in breach of the principle of legal certainty.  It may be clear who falls under the law, but it remains a mystery who does not.  Most NGOs in Ukraine could be said to engage in some degree of work fighting corruption, and this is only one of the terms used without any clarification.

The authors and signatories are convinced that this has been added to make it possible to put pressure on civic organizations and obstruct or prevent activities, such as those aimed at overcoming corruption.

Any selective application of the law provides fertile soil for corruption, and the activists stress that this law will harm efforts to combat corruption and hamper development of civil society in Ukraine.

The reform platform Reanimation Package of Reforms came out in protest at the law as soon as it was passed by the Verkhovna Rada on March 23.  They also called on Poroshenko to veto a law they view as carrying the danger of authoritarian rule, through its imposition of arbitrary mechanisms of control.  They point out that anybody taking part in anti-corruption rallies can, in principle, be forced to provide such a declaration with criminal liability envisaged for failure to do so.

Iryna Bekeshkina, Director of the Democratic Initiatives Foundation, has given a blistering assessment of the new law and the motives of its authors.  Under the title “Maidan lost in parliament”, she notes that the inclusion of civic organizations is fundamentally absurd.  Any dictionary will tell you, she says, that corruption is the abuse by officials of their position or authority for personal gain.  Civic organizations do not have official powers or position.  If you want them to publish their declarations, and all of them report to donors, as well as to the tax department, then pass a law requiring this, but don’t say you’re fighting corruption.

Legislators – now supported by the President – have effectively turned the situation on its head, with the implication somehow that it is those who seek to eradicate corruption who need to be watched.

Bekeshkina sees more involved here than simply the desire by MPs for revenge against the NGOs who, together with the EU, have been forcing them, resisting all the way, to come clean about amounts of property and wealth that are totally incommensurate with their official income.

The calculation was cynical but accurate, she suggests.  If you look at social network discussions, you see that people are simply asking why civic activists should be immune from such requirements.  As well as the answer already cited – that NGOs have nothing to do with the Law on Countering Corruption, there is another consideration.  It is highly likely that this is being done to distract attention from the new ‘discoveries’ the public will receive from the 2016 officials’ electronic declarations?  Exactly such diversionary tactics were used, she reminds the readers, through reports about investigative journalist Serhiy Leshchenko’s flat.  It was recently announced that the supposed investigation into this had been terminated.  By then, of course, the damage had been done.

The same will apply with such declarations.  Organizations receive grants that can seem large to many members of the public, who will hear the figures, without understanding how much they are expected to cover, and how closely each amount is monitored and checked.

Bekeshkina also notes the dangerous lack of clarity in the bill, and the fact that, for example, social research firms might well refuse to carry out surveys on corruption or attitudes to it.  Would it be worth the trouble taken if that meant they were regarded as falling under the above-mentioned law and having to fill in a 40-page declaration.  And get it scrupulously checked since mistakes could get you into serious trouble?  Others will avoid NGOs like the plague, she suggests. Who wants trouble for no reason?

There is a plan behind this woolly and illogical move, and here all civic organizations agree.  The real aim is to put a clamp on those who continue asking inconvenient questions and demanding openness and accountability.  Unfortunately, the President has now become complicit in this.