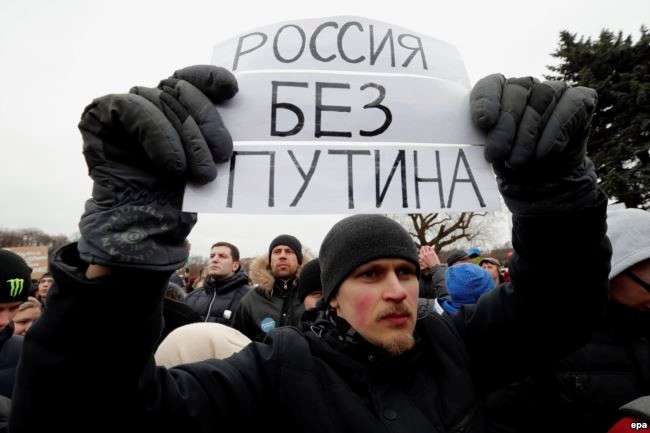 A youthful protester holds a poster reading ’Russia without Putin’ as he takes part in an anticorruption rally in St. Petersburg on March 26.

In spontaneity and sprawl, the weekend protests across Russia were reminiscent of large anti-Kremlin rallies in 2011-2012 that were followed by a steady tightening of government control over the political landscape. But one thing sets the two apart: the striking preponderance of young protesters in their late teens and early twenties -- a generation that includes many who have only ever known life under Vladimir Putin.

In Moscow on March 26, as police seized protesters from the crowds, young people whistled and chanted "defenders of thieves" and "you can’t arrest us all!" On the city’s central Puskhin Square, a couple of teenagers were photographed perched upon a lamp post eluding riot police.

Some came wearing green face paint -- a nod to the attack on opposition leader Aleksei Navalny, who was sprayed with green antiseptic last week. Others brought rubber ducks and sneakers to the rally, alluding to key allegations contained in Navalny’s March 2 report on alleged massive corruption by Prime Minister Dmitry Medvedev.

"I’m not scared," said Oleg Stepanov, a 24-year-old Moscow-based activist for Navalny who protested on March 26 and said he would take part in more rallies even though many of his friends were detained.

"If we don’t change anything, then there is no future," said Stepanov, who added that his friends remain in police custody 24 hours later. "I think the young people who came out yesterday for the first time are precisely the people who want to believe in their future, a future stolen by the current authorities."


The surge in opposition activity by members of this generation suggests Navalny has struck a chord with a demographic raised and schooled under Putin -- and which has largely been seen as apolitical, or outright pro-Kremlin.

Navalny, a 40-year-old lawyer and anticorruption campaigner, announced in December that he would run for president next year despite being barred by a recent conviction on what he calls trumped up charges. He is seeking to elevate his profile nationwide by opening campaign offices across the country, hoping he can strong-arm the Kremlin into allowing him to compete, lest Putin appear weak.

There were no figures available for the ages of protesters on March 26, but the youthfulness of the crowd on the streets was widely noted by newspapers with headlines like "Youth Calls," "New Wave," and "School Years Of Protest."

The Kommersant business daily estimated "almost half" were schoolchildren or university students, while Stepanov and other Navalny activists rejected the notion of throngs of schoolchildren, saying that between 40 and 60 percent were between the ages of 18 and 25.

Ksenia Fadeyeva, the 25-year-old head of Navalny’s election campaign headquarters in the Siberian city of Tomsk -- where organizers boasted a turnout of 1,500 -- told RFE/RL that the lion’s share of demonstrators there were between these ages.

"There were a lot of young people, but it’s wrong to say they were all schoolchildren," Fadeyeva said. "There were schoolchildren, but it was mainly students who came to our action, as it was across the country."

Likewise, there were no official statistics indicating the ages of those detained, though an unnamed source told Interfax that 46 of the detainees in Moscow were younger than 18 -- legally minors -- and added that they were later handed over to their parents.

Political analysts and opposition activists pointed to three main reasons for the surge in youth support for Navalny.

Fadeyeva said young people are less likely to be taken in by Kremlin messaging because they are less interested in state-controlled traditional media.

"In general, I think it’s because young people don’t watch television. Few of my peers watch TV. People younger than me, less than 25 years old, they practically don’t watch it. They get their information online, and the Internet is comparatively free," she said.

Navalny, who is largely ignored by state media, has been forced to bypass traditional outlets by using social networks, circulating his investigations online and in video format, as he did with his investigation into Medvedev.

"It was mainly young people [at the rallies], because young people cope better with the Internet. Young people saw the investigation [into Medvedev]. It has garnered approximately 15 million views. If the information had entered the mass media, not only young people would have come," he said.

In comments to the independent television station Dozhd (TV Rain), Yekaterina Shulman, a prominent political analyst, said that Navalny’s image has connected with the younger generation.

"This is a leader who is capable of speaking with them. There is person who they are going out onto the street for," she said.

Shulman also said that young people are frustrated at what they see as meager career prospects and a system in which the best way to get a job is through nepotism or by joining state-backed youth movements.

The Kremlin on March 27 denounced the protests -- which had a larger arrest count that any rallies in recent memory -- as a "provocation" by the opposition and praised the "absolutely top professionalism" of the police.

The demonstrations, which brought tens of thousands out across the country even though authorities refused to grant permits for many of them, marked the most substantial opposition turnout since the crackdown on protesters at Moscow’s Bolotnaya Square in May 2012.

In comments to RFE/RL’s Russian Service, Vladimir Solovey, a prominent political analyst, said that the surge in youth activism is significant.

"When young people come out, it follows that we should expect that events will develop along radical lines. In all political crises, including in revolutionary ones, the youth are always the ignition and the avant-garde. That they have come out now in Russia indicates a radicalization of the situation," Solovey said.

Vladimir Putin’s spokesman, Dmitry Peskov, told Russian news agencies on March 27 that teenagers had been offered "financial rewards" in exchange for getting arrested, although he did not offer evidence.

The Investigative Committee has opened a criminal investigation into hooliganism and claimed that not only teenagers, but people of all ages, were offered money in exchange for participating in the protests.

’We Discuss Politics At School’

Alyona, a schoolgirl who has just turned 17 and whose surname has been omitted for ethical reasons, told RFE/RL that she attended the rally by chance when she happened to be walking past. She said she was detained and released at 4 a.m. on March 27.

She said she was detained for holding a placard she found at the protest calling for Medvedev to officially respond to the allegations contained in Navalny’s report. The placard read "I’m still waiting for a response" and featured a picture of Zhdun, a cartoon character popularized in an Internet meme.

She said she is sympathetic to the opposition. "I can’t say that I’m on their side, but I believe the opposition pursues the correct goal. In general, I think they’re good and I support them," she said.

"We discuss politics at school," she added. "There are a lot of liberal-minded people among my peers, but also many who think that the current authorities are competent and good. It’s about fifty-fifty, although many people don’t really care what happens."