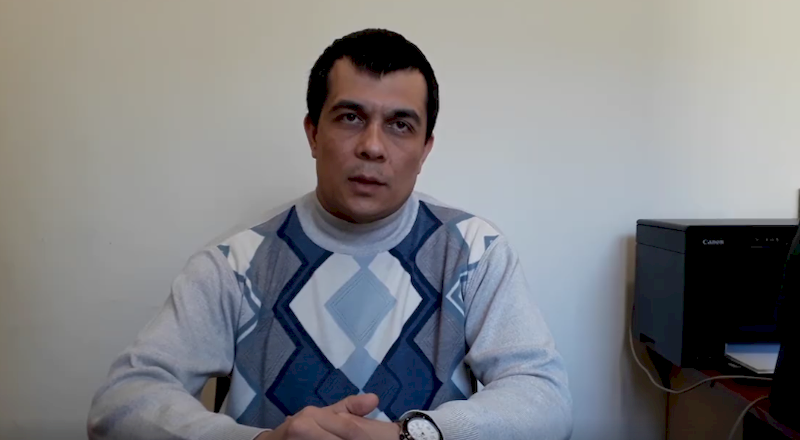 Crimean Tatar rights lawyer Emil Kurbedinov has been summoned for questioning and informed he is facing a preliminary criminal investigation on absurd charges.  This is the latest overt offensive against Kurbedinov and other lawyers defending Russia’s ever-increasing number of political prisoners in occupied Crimea.

Kurbedinov reported on March 28 that he had been telephoned from Russia’s Investigative Committee in Crimea and told that a pre-investigation ‘check’ was being carried out over supposed divulgence of information from a pre-trial investigation.  Kurbedinov demanded a formal summons, which should clearly state which of his many cases the ‘check’ concerns, and in what capacity he is being called for questioning (whether as a suspect, for example).

Kurbedinov links the summons to his professional activities, and to his many public statements about the human rights situation in occupied Crimea.  The last of these, as reported, was earlier in March at the European Parliament where Kurbedinov spoke together with the fathers of political prisoner Mustafa Degermendzhy and of abducted Crimean Tatar activist Ervin Ibragimov.  Their addresses were on the eve of the European parliamentarians’ adoption of an extremely hard-hitting resolution regarding rights abuses in occupied Crimea and demanding the release of all political prisoners.

Kurbedinov stresses that he has no access to any kinds of secret information, only that which is available in his capacity as lawyer.  He noted that this new ‘check’ is similar to several such measures used with respect to Nikolai Polozov, the Russian lawyer representing imprisoned Crimean Tatar leader Akhtem Chiygoz.

Both Kurbedinov and Polozov have faced serious harassment and downright repressive measures over the last months, which are very clearly linked with their active position in highlighting the gross irregularities and lack of any justification to the criminal prosecution of their clients.

It is telling that this new move against Kurbedinov should be over alleged divulgence of information.  He recently spoke of the threats he receives as a rights lawyer and suggested that the reason for such treatment is that that he and other colleagues approach the cases objectively and make them public.  Publicity is what the enforcement officers really hate, and that’s what makes such lawyers Enemy No. 1.

Kurbedinov is acting for defendants in virtually all politically motivated prosecutions in Crimea. He and his colleague Edem Semedlyaev were in fact heading to the home of another Crimean Tatar activist where a search was underway when they were stopped, and Kurbedinov detained.

He was imprisoned for 10 days on insultingly absurd charges, linked with a video posted on a social network in 2013.  Armed searches were then carried out of both Kurbedinov’s home and the office he shares with Semedlyaev, with the illegal removal of computers containing confidential information about their clients’ cases.

His arrest came a day after the effective abduction by the FSB of Russian lawyer Nikolai Polozov, as part of the FSB’s ultimately successful (and quite illegal) efforts to prevent Polozov representing another Crimean Tatar leader Ilmi Umerov, who is charged over an interview in which he said essentially only that Crimea is Ukrainian and that Russia should be made to leave.  Russia has claimed that this constituted ‘public calls to action aimed at violating Russia’s territorial integrity’ under a norm of the criminal code installed after Russia’s annexation of Crimea and carrying a mandatory 5-year sentence.

All of the politically motivated prosecutions in occupied Crimea are gravely flawed and on fabricated charges, and have been repeatedly condemned by the international community.  Instead of rejecting such overt political persecution, Russia is now extending it to the lawyers representing victims.