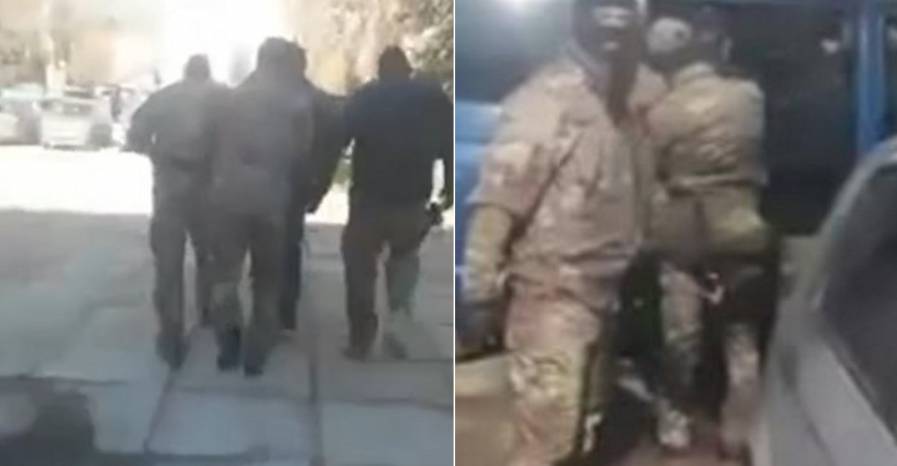 Bilyal Adilov was seized by men in camouflage gear and masks from outside the High Court in Russian-occupied Crimea on March 29.  The men did not identify themselves and simply forced the Crimean Tatar activist into a blue Volkswagen minivan and took him away, in what appears to be the latest attempt to deter other Crimeans from demonstrating solidarity with victims of political persecution.  Once again the abductors later turned into ‘investigators’ and it is Adilov who is now accused of ‘attacking or threatening’ representatives of the authorities

Adilov had come to the court for the latest court hearing extending the detention of 5 Crimean Muslims from outside Simferopol whom Russia is illegally imprisoning on unsubstantiated charges of involvement in Hizb ut-Tahrir.  This totally peaceful organization is legal in Ukraine and most countries, and Russia has never provided any credible reason for its sudden decision to declare it ‘terrorist’.

Adilov was reciting a prayer for the prisoners’ release when accosted by the men in masks.  They did not identify themselves nor, like the Russian soldiers who invaded Crimea, did they have any insignia on their clothes to indicate who they were.

It became clear only several hours later, when Adilov was able to phone relatives, that he was being held by the Russian Investigative Committee in occupied Crimea.  He was put under pressure to ‘confess’ and to sign an agreement to ‘cooperate’ with the investigators,  He refused, and demanded a lawyer.  Edem Semedlyaev was able to see him only about 2 p.m. and reported that he appears to be facing charges under Article 318 of the Russian criminal code – use of violence or threats against a representative of the authorities.

It was the masked men who attacked Adilov on Wednesday morning, not vice versa. This can be seen in the video shot by one witness and is confirmed by others. If the charge pertains to some alleged previous ‘attack’, then why was he only now seized by men who made no effort to identify themselves?

Soon afterwards, Rustem Muedinov, who knows Adilov and who had seen him taken away, went to the Zheleznodorozhny Police Station in Simferopol to report his abduction.  There he was grilled about who he was, and they even tried to take his fingerprints and write down the phone numbers recorded on his mobile phone.  They claimed that this was ‘standard procedure’, however he consulted a lawyer who told him there was no need to agree.

This is the latest, and most flagrant, example of the mounting terror tactics used in Russian-occupied Crimea against Crimean Tatar activists, lawyers and other Crimeans who come out onto the street when their neighbours are targeted by the Russian FSB for searches and arrests, and especially when they publicize information on social networks or to the media about what is going on.

On Feb 21, Marlen Mustafaev was detained on his way to work.  While a search was being carried out of the home he shares with his wife Elnara and their 4-month-old daughter that other Crimean Tatars gathered outside videoing the proceedings and the armed and masked OMON riot officers, one of whom began openly photographing them.  10 men, including many who actively report on the armed searches and arrests were taken away in a police van.  Later that day Mustafaev was jailed for 10 days, and all the 10 men who had stood peacefully and caused no obstruction, were jailed for 5 days.  Russian pro-Kremlin media chose to present a totally different version of events, embellishing their story with fake video footage of a totally different arrest.

Harassment and repressive measures have also escalated against Crimean Tatar rights lawyer Emil Kurbedinov, Russian lawyer Nikolai Polozov and other lawyers representing victims of repression.  Kurbedinov was himself imprisoned for 10 days on manifestly absurd charges and has just received a summons which could result in criminal prosecution for supposedly ‘divulging’ information about the cases he is involved in.

What Kurbedinov has consistently demonstrated, as do the activists who follow politically-motivated or fabricated trials, is the mounting repression in occupied Crimea.  This, however, is no secret, and Russia must not be allowed to intimidate and persecute those unwilling to be cowered.