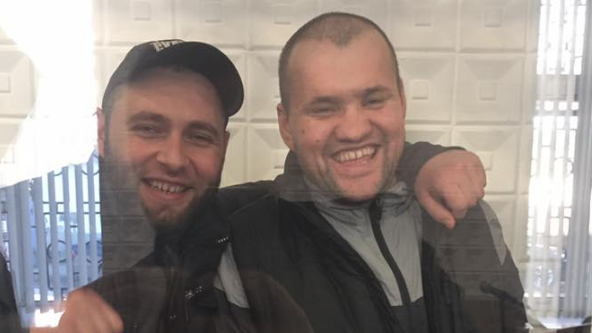 Ali Asanov and Mustafa Degermendzhy are home with their families after almost two years in custody.  Both are under house arrest and their surreal trial is continuing, but at least they have been freed from custody.

The news that the prosecutor had supported this latest of innumerable applications for release from custody came on a day of new detentions in Russian-occupied Crimea and closed court hearings, and was totally unexpected.  There were certainly no grounds for their detention, but then there never had been.  Until April 6, this had not stopped the prosecutor demanding and courts obediently agreeing that the men remain in detention.  Asanov had been in custody since April 15, 2015, when his wife was expecting their fourth children. Degermendzhy had been arrested three weeks later, on May 7 that year.   There is every reason to suspect that both remained in custody as punishment for their integrity in categorically refusing to confess to crimes they never committed, and to give false testimony against the main target of this fatally flawed ‘case’ – the Deputy Head of the Mejlis or representative Assembly of the Crimean Tatar People, Akhtem Chiygoz.  He has been in custody since Jan 29, 2015, and there is no sign of the Russian occupation regime intending to release him.

All three men have long been recognized as political prisoners by the authoritative Memorial Human Rights Centre.  Their prosecution breaches both fundamental principles of law and Russia’s own legislation since they are charged – together with 3 other Crimean Tatars – with involvement in a demonstration which took place before Russia’s invasion of Crimea.  Russia has no jurisdiction to prosecute people over events that unquestionably took place on Ukrainian territory and under Ukrainian law.

There were two demonstrations on February 26, 2014, which largely coincided in time and space.  One was organized by the Mejlis, with around 10 thousand Crimean Tatars, Euromaidan activists and other Ukrainians gathering to block any attempt by parliament to push through a change in Crimea’s status.  The Russian Unity party, led by Sergei Aksyonov organized a counter-demonstration, with around 4 thousand pro-Russian demonstrators. .

The first charges over the demonstration came 10 months later, almost certainly as part of the mounting offensive, in part out of revenge, against the Mejlis.  Not only had this self-governing body of the main indigenous people of Crimea, foiled the Kremlin’s plan for achieving annexation without the use of troops, but it had then continued to peacefully oppose Russian occupation and report the ever-increasing number of rights violations.

Chiygoz is charged with ‘organizing mass riots’ and could face a 15-year sentence, although all video footage shows him clearly trying to prevent confrontations. Asanov and Degermendzhy (and three other men not imprisoned) are accused of ‘taking part in mass riots’, with this carrying a sentence of from 2 to 8 years.

The problems with the case are not merely in the lack of jurisdiction, since it is basically quite unclear what any individual defendant is really charged with.

In Asanov’s case, there is a supposed ‘victim’, a pro-Russian demonstrator, yet the video footage shows clearly that the alleged ‘victim’ threw a bottle with water which hit Asanov on the head, and that Asanov was too far away to hit him back.  Asanov, however, was arrested in April 2015, and held until Thursday in appalling prison conditions and charged with ‘causing pain’.  There is nothing to confirm even this ‘pain’ as the alleged victim had never reported it.

The cynicism in Degermendzhy’s case is also extreme.  Video footage (around 3.15 here https://youtube.com/watch?v=brYjd2Paks0 ) clearly shows the young man helping his father, who has severe asthma and was in obvious distress, to leave the demonstration.  His father needed medical assistance and Mustafa did not leave him.

Both men and their families have reported from the outset that they were effectively offered their freedom for agreeing to give false testimony against Chiygoz.

In July 2016, Russia separated the two ‘trials’, with this clearly intended to minimize the unity and support shown the men.  Still worse, Chiygoz has been prevented from even being present at his own ‘trial’, and is forced to communicate with the court by video-link from his cell.