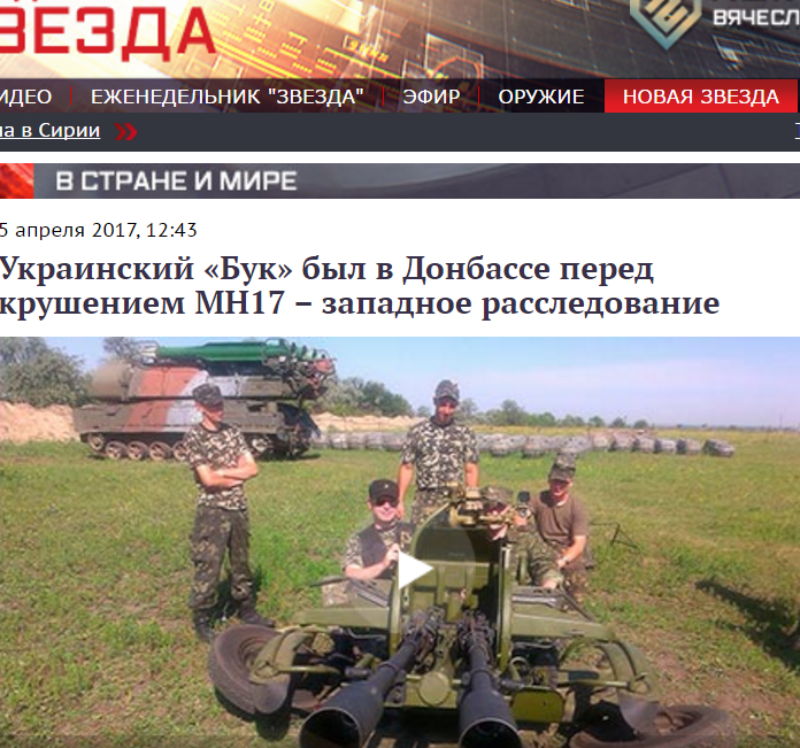 Russian media, including a website closely linked with the defence ministry, have misreported the findings of a new Bellingcat investigation to falsely claim that a Ukrainian Buk missile launcher was in Donbas just before the Malaysian MH17 airliner was downed in July 2014.  Frustratingly, many sloppy Ukrainian websites have come close to following suit.

Bellingcat journalists have played a major role in uncovering evidence helping investigators into the MH17 disaster and in debunking versions Russia has put forward to blur the truth.  For those reasons, it is unusual for the pro-Kremlin media to quote Bellingcat, which should have warned Ukrainian journalists to take care.

A new, relatively short, report entitled Photographs of Ukrainian Buks Geolocated in Poltava Oblast, Nearly Three Years Later was posted on April 4, 2017.  The investigators explained that they had been able to successfully geolocate photos that had been posted with the wrong geotags just before the MH17 disaster.  In the very first paragraph, they state quite unequivocally that the new information demonstrates that the Buk missile launcher in question had been in the Poltava oblast, not eastern Ukraine.

They then explain the problem, namely that photos posted by a Ukrainian army chaplain on July 15, 2014 contained geotags “geotags indicating that the photographs were taken near Donetsk in eastern Ukraine”, and go on to say that “the apparent location of these photographs seemed to contradict statements from the Ukrainian government claiming that there were no operational Buks in the zone of the “Anti-Terrorist Operation,” or the “ATO zone.”

All has now been clarified, however, and the photos accurately geolocated as having been taken on the Myrhorod Air Base in the Poltava oblast.

Nothing could be clearer – unless you write for Russian media interested in reporting the opposite or some Ukrainian media, who prefer sensationalist titles or copy-paste reporting to accurate information even on such an obviously critical subject.

It would be difficult to suspect Russian TV Zvezda of not having understood the original report, since it deliberately selects a part of it to turn the text on its head.  One of two reports is entitled: “Ukrainian ‘Buk’ was in Donbas before the MH17 disaster – western investigation’, the other: “Ukrainian ‘Buk’ in Donbas was exposed by a priest’.

The entire point of the Bellingcat report, clearly articulated in the title and opening paragraph, has thus been deliberately omitted in order to falsely claim – citing Bellingcat! – that Ukraine had a Buk missile carrier in Donbas.

On July 17, 2014, Russian media swiftly reported the news received from the Kremlin-backed militants that they had downed a Ukrainian military plane.  Over the next hours, as it became clear that a passenger plane had been hit and 298 civilians killed. they began trying to remove the incriminating footage, Since then, Russia has put forward a huge number of different ‘versions’ for the disaster, none of which was taken seriously by the international investigation team who concluded that the plane had been downed by a Russian Buk missile launcher which was then taken back to Russia.

It was noticeable that even the British lawyer representing Russia at the International Court of Justice in March this year was careful not to deny the possible use of a Buk missile, but only the intent to kill civilians.

Any Russian attempt to claim that there was a Ukrainian Buk missile launcher on the scene seems pitched at a local audience who are unlikely to check the original.

If the motives of TV Zvezda and other Kremlin-loyal media are clear, the same cannot be said for the many Ukrainian media who at very best failed to properly inform their audience about the report.

The kind interpretation is that both media, which are linked, understood their mistake.  The ICTV link now leads nowhere, while the Korrespondent.net site has a correct title and text.  Not, however, before many thousands of people opened the misleading site.  At least in Korrespondent.net’s case, this would not be the first occasion where highly questionable material has been posted.

With other sites, the situation is not so extreme. Even if a key excerpt is clumsily translated on Apostrof.ua or Focus.ua, the key point, that the Buk missile was in fact in the Poltava oblast, is stated.  Readers are, however, most often attracted by titles, and do not often read much further (if at all), and the titles are not helpful.  Apostrof.ua writes: “MH17 Catastrophe: Bellingcat ascertained the situation with the ‘strange’ Ukrainian Buk’, while Focus.ua makes even greater demands on people’s ability to read a lot into inverted commas with the following: ‘Bellingcat explains how a Ukrainain Buk ‘appeared’ in Donbas 2 days before the MH17 Catastrophe’.

After three years of toxic Russian propaganda and fakes about Ukraine, no better was to be expected from TV Zvezda and its ilk.  The same should not be true of Ukrainian media.