Further reprisals against Russian blogger jailed for reposting that Crimea is UkraineRussian gets 2 years for reposting that Crimea should be returned to UkraineRussian blogger gets 2-year sentence for reposting that Crimea is UkraineMore reprisals against Tatar leader jailed for criticizing Russian occupation of CrimeaSo can you annex a country’s territory & jail those who criticize this for ‘separatism’?3-year sentence for criticizing Putin and Russia’s annexation of Crimea5 years imprisonment for criticizing Crimean annexation and Putin?Poet labelled ‘terrorist’, flung off Wikipedia for verse in support of UkraineRussian teacher on trial for poem against annexation of CrimeaKaliningrad ’flag prisoners’ charged with insulting the veterans Moscow rejects7 years for raising flag in protest at Russian invasion of CrimeaKaliningrad FSB finds ‘deep offence’ in a German flagRussia, the improbable human rights crusaderPutin’s selective terrorismPro-Russian thugs beat up Ukrainian unity demonstrators – except on Russian TVArmed men cut off Ukrainian channels in DonbasDonetsk television station seized to provide "correct" - Russian - coverageMoscow’s “Voice of the People” in SlovyanskMurdered in SlovyanskUS journalist released, others still held hostage in Slovyansk
• Topics / News from the CIS countries

Why Russian writer Boris Stomakhin is in prison, Zhirinovsky & Kadyrov in power 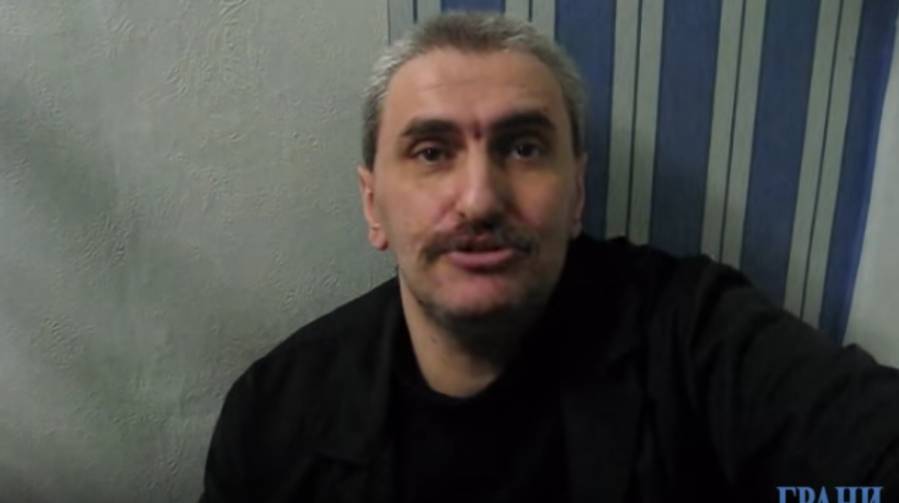 Boris Stomakhin, Andrei Bubeev and Rafis Kashapov are all serving prison sentences in Russia for articles or posts / reposts, expressing strong criticism of the Putin regime and Russia’s invasion of Crimea.  In each case, the charges could just as well be laid against Russian MP Vladimir Zhirinovsky, Alexander Dugin, the fascist ideologue with friends in high places, and Putin’s protégé and leader of Chechnya, Ramzan Kadyrov.

If the Russian authorities do not organize a new sentence, 42-year-old Boris Stomakhin will have served 12 years when released in November 2018.  As his lawyer Svetlana Sidorkina stresses, “this is a sentence not for murder, not for the use of force, but for words (for expressing his views)”.

Stomakhin’s views over the years and, consequently, his publicist works, have antagonized many people.  So too have those of a number of prominent Russians.  On March 23, 2016, Deputy Speaker of Russia’s State Duma Vladimir Zhirinovsky stated on Russian TV that “terrorist attacks will take place throughout Europe.  And that is in our interests.  Let them all perish and die.  What are you waiting for?  Let’s do it ourselves.”   Zhirinovsky faced no legal or other consequences.  Russian fascist ideologue Aleksandr Dugin can be easily heard or read in the Russian media and on social networks saying that all Ukrainians should be killed, or calling for the dismantling of the border between Ukraine and Russia, with Ukrainian border guards eliminated as ‘illegal armed groups’.

In February 2016, Ramzan Kadyrov posted a video on Instagram showing opposition leader Mikhail Kasyanov directly under a sniper’s vision.  The chilling message read: “Kasyanov has arrived in Strasbourg for money for the Russian opposition.  Who hasn’t understood, will understand”.  The video was later removed, but due to Instagram’s standards, not Kadyrov’s.  Nor those of Russian President Vladimir Putin who has consistently supported Kadyrov and later again re-confirmed his post as leader of Chechnya.

In all three of the above cases, the choice of possible offensive utterances to cite was vast, yet not one has even lost their posts, let alone been deprived of their liberty.

The situation is quite different for those who express views critical of the current regime, especially about Russia’s invasion and occupation of Crimea.

Russia’s prosecution of Ukrainians in occupied Crimea for expressing opposition to annexation is in a league of its own as far as lawlessness is concerned, and has been discussed here many times.  There are, however, also Russians whose prison sentences are directly linked with criticism of annexation.  They include, Rafis Kashapov, a 58-year-old Tatar activist, who was sentenced to 3 years for four posts which criticise both Putin and Russia’s invasion of Crimea (they are described here).  Andrei Bubeev, a mechanical engineer from Tver, has been jailed for two and a half years for merely reposting a cartoon picture of a toothpaste tube with the caption “Squeeze Russia out of yourself” and an article by Boris Stomakhin entitled ‘Crimea is Ukraine’

In the article, Stomakhin called Russia’s invasion and annexation of Crimea the final straw, the border dividing this world from that, good from evil.  Stomakhin wrote that the return of Crimea to Ukraine should serve as a unifying idea for all Russians holding anti-imperial views, and that Russians should paint the words “Russian occupiers out of Crimea!” on every wall in every Russian city”.   Stomakhin however believes that Crimea can only be returned to Ukraine if the Russian Federation is dissolved, and he suggests in the text that the latter’s collapse is inevitable.

Bubeev will almost certainly serve every day of his sentence for reposting the text, as will Stomakhin for that text, and other ‘dissident’ views.

The charges are serious enough to make most people turn away, assuming that there must be something to them.  There are undoubtedly extremely strong, even shocking, statements in many of his articles, especially those against Russians when discussing the Chechnya war (for which he has, in any case, served out his sentence).  The statements are at least as strong as the views expressed above by Dugin, Zhirinovsky or Kadyrov.  The target, however, is different and that appears to make the difference between total impunity and a prison sentence.

Stomakhin has been an implacable enemy of the current Putin regime from the beginning, and supported Chechens fighting for their independence during the Chechnya war.  As can be seen from the above-cited article, he has been as unyielding in his opposition to Russia’s aggression against Ukraine.

It is this that he is paying for with his freedom, and his health.  He is constantly held in solitary confinement in a Perm oblast prison, with most of the penalties on fabricated charges.  There have now been three attempts to transfer him totally to cell-type conditions, which have fortunately thus far been resisted by the court.

The Memorial Human Rights Centre has spoken out strongly against the second sentence in a harsh-regime prison colony.  They consider this unwarranted, and in clear breach of the principles of proportionality and justice.  They note that since Stomakhin broke his back in 2006, his health has deteriorated, and any attempts to place him in even worse conditions are completely unacceptable.

The Memorial statement is strong enough to make its failure to recognize Stomakhin as a political prisoner seem rather strange.  Memorial notes that the texts for which Stomakhin was convicted posed no real danger to the public.  There were no victims and nobody who could have been incited to violence as a result of the texts.  There were also some overtly absurd charges.  He was accused, for example, of having justified the assassination of Alexander II (in 1881!) and for having tried to influence the activities of Shamil Basaev several years after the latter’s death.  Such nonsensical charges, they point out, served as grounds for at least half of the prison sentence. They reiterate their earlier demand that Stomakhin be released and the charges dropped.

Please write to Boris Stomakhin!  He needs our support and to know that he is not forgotten.  Letters must, unfortunately, be in Russian.