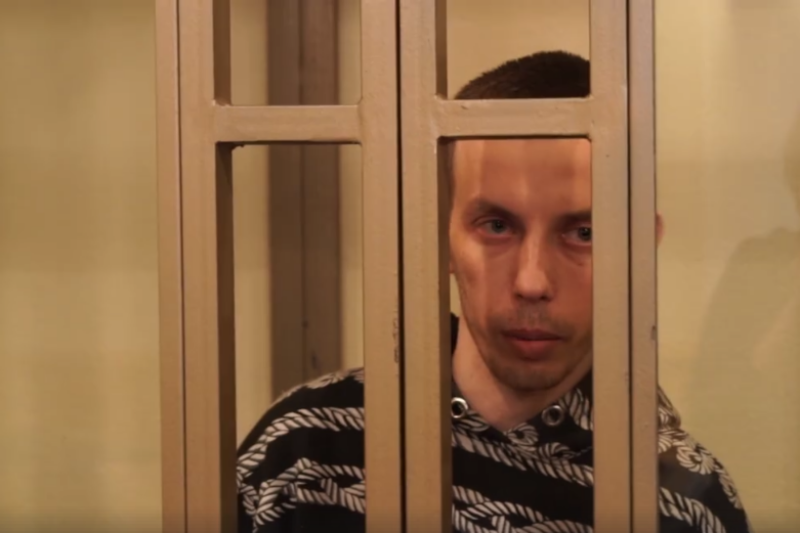 The second time around, Russian judges have done what they’re told and sentenced Crimean Tatar political prisoner Ruslan Zeytullaev to 12 years’ maximum security.  The sentence was expected, not because there were any grounds to the charges against the 31-year-old father of three, but because Russia’s FSB needed an ‘organizer’ for its paperwork to seem ‘in order’.  The retrial and this sentence are especially chilling since there are three other men charged under the same type of quota, and they face even harsher sentences.

The only positive information is that Zeytullaev announced in court on April 26 that he would be ending his hunger strike, begun 22 days ago.  He notes that he has been asked to stop it by his family and friends, by prominent Crimean Tatars (including Mustafa Dzhemiliev and Ilmi Umerov) and many other people concerned for his health.  During those 22 days, he adds, he sent 14 statements to state and law enforcement bodies, not one of which received any response.

This was his first hunger strike, Zeytullaev said, but not his last and he has no intention of giving up his struggle for the rights of his people.

Ruslan Zeytullaev is one of the first four men arrested in early 2015 and charged with unproven involvement in Hizb ut-Tahrir, an organization which is legal in Ukraine and in most countries.  Russia declared it ‘terrorist’ in 2003 without ever providing any grounds for the ruling, and a leading Memorial expert Vitaly Ponomaryov believes that the decision may have been to help Russian courts deport people facing religious persecution to Uzbekistan.  It has since led to hundreds of long imprisonments in Russia, which is now imposing its repressive form of persecution on occupied Crimea.

There are 15 other men now in custody facing charges over Hizb ut-Tahrir.  Muslim Aliev, Enver Mamutov and Teymur Abdullaev, for highly suspect reasons, have been accused of an organizational rule, with this carried the same type of sentence as in Zeytullaev’s case, with one ominous difference.  Possibly because of the lack of real protest from the West, Russia has now begun adding a new charge of ‘attempts at violent seizure of power’ which will add 8-12 years to all sentences.

There is no evidence that any member of Hizb ut-Tahrir anywhere in the world has been guilty of acts of terrorism or violence.

There was also no proof that any of the four men tried and initially sentenced back in September 2016 were now members of Hizb ut-Tahrir.  Such evidence is largely viewed as unnecessary.  The courts generally provide the sentences required, and ask no inconvenient questions when the ‘secret witness’ is obviously being prompted by somebody in the room with him, and even then gives contradictory testimony.

Other pieces of ‘evidence’ included: a linguistic assessment which claimed that a word used very commonly by all Crimean Tatars immediately identified Hizb ut-Tahrir members; reference to events preceding Russia’s annexation, as well as mention of the men’s attitude to Russian occupation and Ukraine.

For the FSB, however, there was a temporary bleep in this case.  In Crimea, there are committed lawyers who insisted on highlighting and publicising the gross irregularities in the case.  Perhaps for that reason, the same Rostov Military Court which tried Zeytullaev, together with  Rustem Vaitov, Nuri Primov and Ferat Saifullaev initially balked at providing the sentences demanded. On September 7, 2016, it rejected the more serious charges of ‘organizing’ a Hizb ut-Tahrir unit in Zeytullaev’s case, and convicted him and the others merely of ‘involvement’.  All four men should have been acquitted, but that never happens, so the judges’ unwillingness to pass a 17-year sentence for nothing had seemed promising.

Zeytullaev’s lawyer, Emil Kurbedinov is clear that the relative integrity demonstrated by the first court placed the FSB in a tricky position.  Their ‘plot’ required a leader of Hizb ut-Tahrir ‘terrorist cells’.  Now there was not only any evidence of such cells, but a court had found no ‘leader’.  That could have repercussions for the other cases, and for the FSB men’s only track record, as viewed by their superiors.

The sentence in Zeytullaev’s case was swiftly challenged by the prosecutor (doubtless following orders from the FSB) and on December 27, 2016, his sentence was overturned and the case sent for ‘retrial’.

There was no new evidence.  There was the same testimony from Alexander Kozhemyaka, a former SBU [Ukrainian Security Service] official who switched allegiance and now works for the FSB.  There is considerable evidence that he had a vested interest in a land dispute which Zeitullaev and Saifullaev won in 2012.  The other prosecution witnesses essentially spoke in favour of the men in court.  During the first trial, one openly stated that he had signed his ‘testimony’ without reading it after being told he would also be arrested if he didn’t.

It is a tragedy that the world has stood by and watched Russia (and Uzbekistan) sentence men en masse for no more than allegedly holding views that diverge from those of the officially.  The situation in Russian-occupied Crimea is especially acute, and the renowned Russian Memorial Human Rights Centre rightly declared all four men political prisoners well before the trial ended.  There can be no chance of a ‘fair trial’, given that Russia has no right to apply its legislation on territory it is illegally occupying, and Hizb ut-Tahrir is legal in Ukraine.

Serious protest is needed now.  Almost all the men now indefinitely in custody have children whom they will not see for a decade or more if Russia is allowed to continue such repressive measures on territory it is illegally occupying.